Last month, my wife and I were visiting our son in Portland, and during the visit we went down to Silver Falls, an Oregon state park, for a hike. On the way there, we passed through Woodburn, Oregon, and I directed us to pass by the former SP tracks, since I knew that there was a restored SP steam locomotive there.

The locomotive is Mogul (2-6-0) no. 1785, lovingly restored over many years’ work by Frank Scheer and friends. I had not seen it for quite awhile and wanted to see how it looked. Judging by the city’s plaque, it was last repainted about 2011, so it's been out in the weather for some time. (Incidentally, the city plaque gives full and generous credit to Frank for his energy and leadership on this project.) Overall, the engine looked quite good. In the background of this view can be seen the mainline tracks. 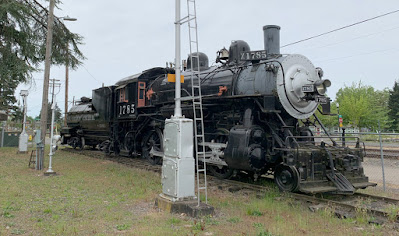 I have spoken with Frank quite a few times, back when the annual Winterail exposition event was located in Stockton, California, and I know Frank hunted down replacements for many missing parts on the engine, such as gauges in the cab. For that reason, the cab is now sealed up, and the engine is behind a fence, as unfortunately it should be. But of course that makes photography a little difficult.

In the photo above, you may note that a restored semaphore signal, and a “wig-wag” crossing signal, have been placed here also. The semaphore heads are shown below. You will note that the “green” lens is actually fairly blue, typical of older semaphores when the lighting bulb was yellowish, that in turn made the light look green. 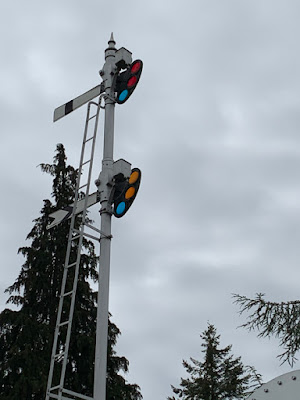 The cab side has all the required lettering, and behind it you can see the typical SP Vanderbilt tender, in this case a 10,000-gallon size. This was on the large side for a Mogul, but late in their lives, they did a lot of mainline work in flat territory, such as the Willamette Valley of Oregon. And here again, I apologize for the difficulties in photography due to the necessary fence. City plaque at right. 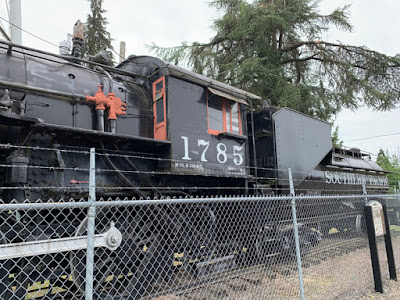 And finally here is the rear end of the display. Note that the exact gallonage, 10,060 gallons, is shown here. As with tank cars, these cars were not manufactured with enough precision that each tender had identical capacity, thus the non-round number of gallons. 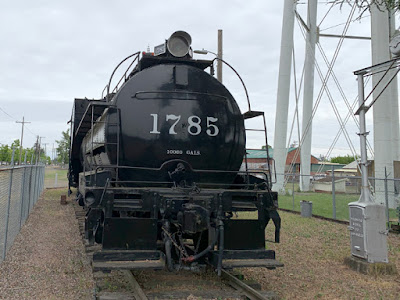 And finally, we did get to Silver Falls and hiked a few miles in the park. There are several high falls, cascading over lava  cliffs, as in the example shown below. For scale, note the person standing on the trail at the very right edge of the photo. This is a spectacular park and I recommend a visit, if you’re in northern Oregon. 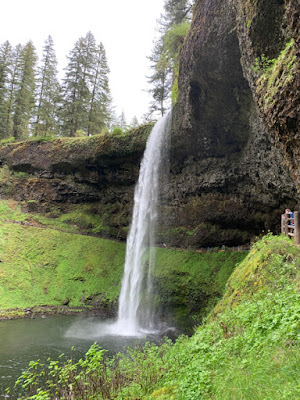 I enjoyed seeing Frank’s engine, as I think of it, one more time. I’m glad it still looks good and that the City of Woodburn appears to be proud of it. I know Frank is.