In the previous post in this series, I showed some scratchbuilt crates, that are intended as very large loads requiring open-top cars for shipment. That post is at this link: https://modelingthesp.blogspot.com/2021/05/open-car-loads-crates-part-2.html . In the present post, I want to say a little more about some of these scratchbuilt crate loads.

I will begin by showing the final form of the crates whose construction was described in the previous post (citation in previous paragraph). I showed the Ingersoll-Rand side of the “long” crate in that previous post in a gondola, but it can equally well move on a flat car, in this case WLE 1974, being switched at Shumala. A scale 6 x 6-inch timber is attached at each end to secure the load to the deck. 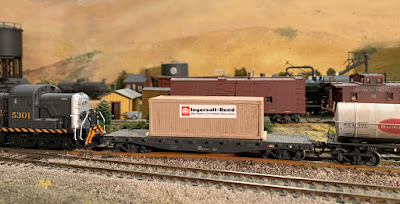 The other side of the crate, as showed earlier, represents an outbound shipment from the layout’s Jupiter Pump and Compressor plant in Ballard. In the photo below, the JP&C plant switcher is spotting a New York Central flat car with this crate load, on the lead track for SP pickup. 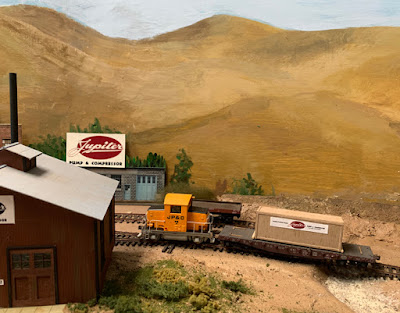 The same crate, naturally, can also move realistically in a gondola. The next photo shows the same load in an SP gondola, departing Ballard in the branchline freight that is returning to Shumala.

In addition, a rather tall crate was constructed, for use on depressed center flat cars. Below is a view of the load in that situation, shown here in a mainline train, riding on the Devore flat car I restored recently (see the post on that project here: https://modelingthesp.blogspot.com/2020/08/restoring-devore-kit-part-2.html ). The visible side of the load here  is the Mesta Machine Co. side.

The last load I want to show here is one I have mentioned before, but may be worth repeating. It is a load from the Lucifer furnace company in Pennsylvania, and I showed it on a flat car in a previous post (see it at: https://modelingthesp.blogspot.com/2018/05/still-more-open-top-car-loads.html ). Here is a current view of this load, on a different flat car, spotted on the team track in Santa Rosalia. 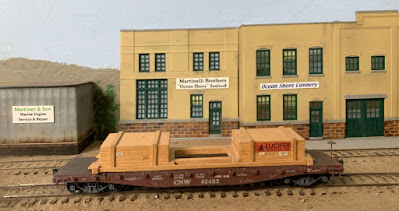 The versatility of crate loads would be hard to over-emphasize, as they offer the chance to identify the load beyond merely what may appear on a waybill. I enjoy the ones I have and am working on more of them.