In the previous post, I reviewed the Thomas Hoff method of cutting out and replacing window and wall sections of model Pullman sleepers from Rivarossi (sold by AHM, Associated Hobby Manufacturers). That simple method was thoroughly described in five articles in Mainline Modeler in 1981, and in the “Best of Mainline Modeler” book I showed in the previous post (it is here: https://modelingthesp.blogspot.com/2021/05/modeling-heavyweight-sleepers-again.html ). That post also showed the first steps on the present model.

One thing to do before painting the modified Pullman I’m building, inside and out, is to add partitions around the room accommodations and the restrooms. Rivarossi did produce a molded plastic Pullman interior, and it can readily be kitbashed for floor plans other than the original 12-1 (12 section, 1 drawing room), as I showed in a post awhile back (you can find it at this link: https://modelingthesp.blogspot.com/2014/08/modeling-sp-passenger-cars-pt-4-sleeper.html ). These interiors are usually available for sale on the Internet, as “AHM 1920s Pullman interior.”

But for Pullmans in deadhead moves, where no passengers would be on board, which is a common Pullman move on my layout, the interior seats (barely visible anyway) and passengers can be omitted. The only thing really needed inside, then, are the partitions mentioned above. I used 0.030-inch Evergreen styrene sheet for these. I also used some 1/8-inch square styrene strip for the inside corners of these partitions. These corner strips are effectively invisible in the car interior.

These partitions are shown below (they might better be described as “view blocks,” since there are some areas of the car where one should not be able to see clear through the car). The larger one is for the end of the car with room accommodations, divided for the women’s room at the end. The smaller one is for the men’s room at the other end. Do check clearances of these partitions before proceeding further! 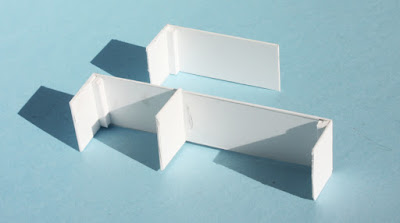 Next I spray painted the entire car interior, and both sides of the partitions. I chose a Model Master color called “Light Ivory.” Pullman used a variety of interior color schemes, all of which used very muted colors. If anything, the Ivory is probably too light, but for visibility through the car windows, I thought it would help make visible the fact that there is some interior. In the photo below, partitions are loosely in place, not yet glued.

With the interior painted and thoroughly dry, I ran a strip of masking tape along the entire interior of the car. This ensures that the sides of window openings will be body color, but that the interior color is maintained. (And the interior partitions were removed for this step.)

I then airbrushed the outside of the model with Star Brand “SP/UP/D&RGW Dark Olive,” STR-29. This paint is an excellent match to the SP Common Standard drift card for Dark Olive Green. And it goes on smoothly and does not affect the bare plastic model surfaces. But because the body molding is black plastic, several thin coats should be applied to ensure that the color is fully developed. The Dark Olive car is shown  below, merely resting on the trucks, not with them installed.

The use of SP Dark Olive Green instead of Pullman green is deliberate. Pullman green would be the correct color, but that prototype color is very dark. Under indoor lighting, as on a model layout, it really looks too dark. For years I used to lighten Floquil’s Pullman Green with some of their Coach Green, but I now feel that Dark Olive Green is a better choice.

Next comes the issue of how to letter the car.  As mentioned in the previous post (link provided in the first paragraph of the present post, above), this model is intended to approximate a Pullman 10-1-1, which means 10 sections, 1 compartment, 1 drawing room. Since Southern Pacific only bought two cars of this floor plan from Pullman, I decided to model the car as one that remained in Pullman ownership (and lettering) after the 1948 sale of much of Pullman’s fleet to the railroads.

You can find a clear and factual account of the Pullman sale, and the SP role in it, in the very informative volume, Southern Pacific Passenger Cars, Vol. 2, “Sleepers and Baggage-Dorms” (SPH&TS, Pasadena, 2005). This is described in the book’s Chapter 3, pages 165–217. Because my model is not quite an accurate 10-1-1 nor a 10-1-2, I realized that I needed to use a name for the car from one of Pullman’s car name groups that was applied to multiple car types.

I chose the “Lake” series, of which there were several. Moreover, rather than conflict with the history of an actual car, I decided to use a Pullman-like name but not an exact one. I chose a name that might well have graced a Pullman in SP service, Lake Merritt, named for the prominent lake in Oakland. I chose the excellent Thin Film decal sheet, HO 160, which readily provided all I needed. (You can click on the image to enlarge if you wish.)

I still have to rebuild the car roof to include air conditioning ducts, and to manage a few more of the car details. I will turn to those tasks in a future post.