Awhile back I wrote a series of blog posts about heavyweight Pullman sleepers, including a post showing how I followed the Thomas Hoff articles in Mainline Modeler during most of 1981 to convert among the various floor plans of the Pullman fleet (see it at: https://modelingthesp.blogspot.com/2014/07/modeling-sp-passenger-cars-sleepers.html ). In these articles, Hoff showed how to take advantage of the essentially modular Pullman car design, by moving window groups and other parts to reproduce different cars. 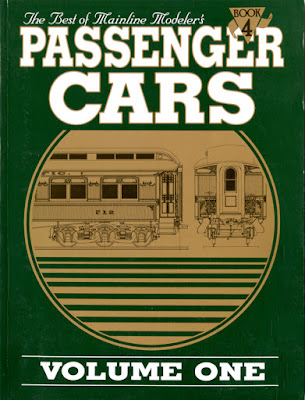 I still have some of the materials for such conversions, having purchased a whole bunch of the AHM (manufactured by Rivarossi) heavyweight Pullmans back in the day. This model represents a 12-1 Pullman, that is, 12 sections and a drawing room, the most numerous Pullman floor plan by far. There were at least 4000 cars with this floor plan, out of a fleet of 8000 or so cars.

In the Hoff process, one uses a “sacrifice model” to obtain window or other panels to then replace in the window band of the Pullman you are modifying, since these signify what arrangements exist inside the car. At one time, New England Rail Services offered these parts, but they now are getting hard to find, so we ma be back to using old Rivarossi bodies.

The photo below is from the second Hoff article, and shows a paired window (used for individual Pullman sections and some room accommodations) being placed in the car being modified. This may look tricky, but in practice is not, for two reasons. First, you cut out the desired piece oversize, and cut the destination area undersize, and have lots of material available for working to make the two fit. Second, the Rivarossi plastic is pretty soft and files or sands quite quickly. In fact, my view is that the challenge is to work slowly enough. 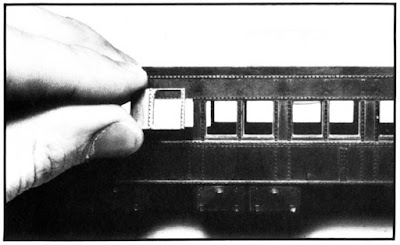 One sacrifice body can serve for a number of modifications. I happened to have purchased a couple of cars with the CNJ “Blue Comet” paint scheme, and it was lucky because the window band is a cream color. This makes it really easy to work on. Here is one of those cars, after numerous removals. 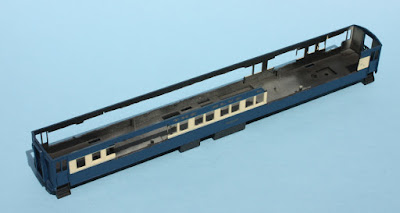 The advantage of the cream color shows up when you are placing the piece being moved, as you can see on the body below. I usually strip the old paint from the body to be modified, so it’s then black, and a replacement part like this is easy to see and work with. The window pair shown here serves a drawing room in the sleeper being modeled; the number of sections is being reduced from 12 to 10.

I have already done, with this method, a 14-section tourist Pullman, an 8-1-2 (8 sections, 1 drawing room, 2 compartments), and a 10-1-1 (10 sections, 1 drawing room, 1 compartment). The car shown above will be another 10-1-1, and will be lettered “Pullman” as representing one of the cars not sold to railroads in 1948, but retained in the Pullman pool. I already have two such cars (as I showed in an earlier blog post, which can be viewed at this link: https://modelingthesp.blogspot.com/2018/02/my-pullman-projects-part-2.html ), and wanted to add one more.

But first the model needed to have some interior partitions, and paint inside and out. More on that in a following post.

Posted by Tony Thompson at 8:43 AM