This post is a follow-on to the recent post about proportions of a freight car fleet, a much more general topic (you can review that post at this link: https://modelingthesp.blogspot.com/2021/05/proportions-of-freight-car-fleet.html ). In the present post, I want to turn to the issue, not of fleet size, but of what cars are in each fleet. The previous post’s graphs were for entire car fleets (minus coal, ore and ballast cars). Now let’s delver further into details.

I would begin with the national car fleet, as described in ICC statistics for Dec. 30, 1950. The table shown below was published in the 1953 Car Builders’ Cyclopedia, page 69.

What I suppose we could call the “bottom line” is at lower right, the total U.S. freight car fleet size of a little over 2 million cars. These statistics unfortunately combine gondola and hopper cars, both important categories. I only have data for Class I railroads (one of the columns above), but for 1950, there were 556,000 hoppers, 23,000 covered hoppers, and 285,000 gondolas. We can use this ratio, 556 / 865, to estimate that in the above table, the 882,000 combined hoppers and gondolas comprised 572,000 hoppers.

But other categories are clearly called out in the table, and we can recognize that the largest category is box cars (including auto cars), at about 720,000, followed by hoppers and gondolas. With that bottom-line number, we can make a bar graph of the national car fleet at the end of 1950. 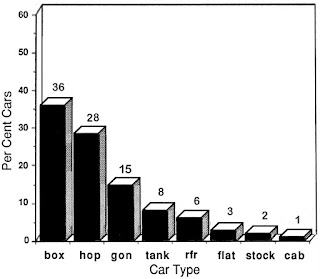 Keep in mind, looking at this graph, that no railroad or any car owner could match this graph exactly. As the table above shows, nearly all tank cars and refrigerator cars were in private ownership. Moreover, each railroad owned a fleet of freight cars suited to its territory and its traffic. The graph of the car fleet for one’s layout might look like this, but no individual car owner could do so.

This is an interesting piece of information, the composition of the national fleet, but how do we do the same for individual railroads? We turn to the Official Railway Equipment Register, or ORER, in this case for April 1950 (the issue I have). We can quickly assemble bar graphs like the one shown above, but for individual railroads.

I will begin with the Pennsylvania. We saw in the previous post that their car fleet was the largest in the U.S., with or without hopper cars. Here is a graph of the constituents of the PRR fleet.  I’ve retained the order of car types from the graph above. 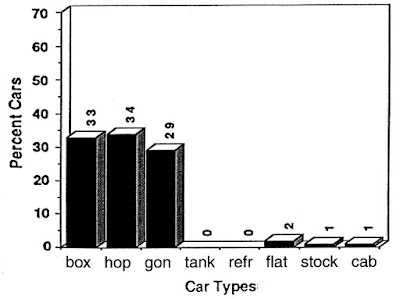 Let us look for a second at just the Pennsylvania box cars. In 1950, they were more than 8 percent of the entire national fleet of box cars, so on many layouts, you might expect 8 percent of the foreign road box cars to be PRR cars. (Note that I separate foreign cars from home-road cars; the issue of home-road car percentages is an interesting but separate one, as I’ve described: https://modelingthesp.blogspot.com/2012/12/choosing-model-car-fleet-some-numbers.html .)

What that 8 percent would mean can be shown with a numerical example. Let’s imagine that you have, or plan to have, a freight car fleet for your layout that will include 150 box cars that can be foreign-road cars (this is a big number, but just an example). The data above then suggest that 12 of your 150 foreign-road box cars will be PRR cars. 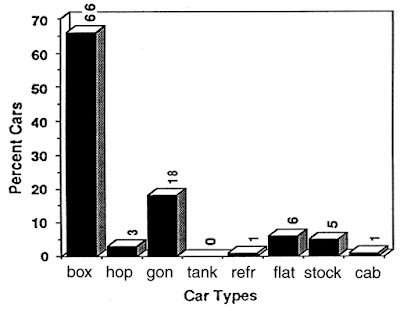 In 1950, the presumably free-running Rock Island box cars, AAR type XM, numbered a bit over 17,000 cars. The national fleet of such cars was about 720,000 cars, making the Rock Island fleet about 2.3 percent of all box cars. In model terms, that might mean that if my model railroad has 150 foreign-road box cars, about 3 should carry RI reporting marks.

Now I will show just one more example, the Southern Railway, which is interesting because of the substantial number of flat cars, well above the national average. Moreover, the ORER shows us that fully two-thirds of these were AAR type LP flat cars, meaning equipped for pulpwood service. This was a regional emphasis (the Seaboard fleet was similar in this regard), but the difference emphasizes the need to understand each railroad separately. And one might well decide that those pulpwood flats would not travel far beyond the rails of the Southern or its neighbors. I will continue with some more observations on individual railroad car fleets in a future post.