In several recent posts, I have addressed the topic of weight agreements, the arrangements by which  a shipper could certify weight of a shipment loaded into a freight car, on the basis of the shipper’s own scale, or by counting packages loaded, and multiplying by unit weight. These agreements were indicated on waybills with a stamp giving the agreement number, thereby precluding any need to weigh the car (though railroads retained the absolute right to weigh any car, any time).

I pointed out some time back that there were known to be several regional Weighing and Inspection Bureaus or WIBs that administered these weight agreements, but at that time I didn’t know their geographic boundaries. (That post can be found here: https://modelingthesp.blogspot.com/2016/11/sps-instruction-to-station-agents-part-2.html .)

With the help of prototype waybills from Andy Laurent’s collection, I was able to retrieve several of these regional agreement stamps, as I showed in a blog post (it is at this link: https://modelingthesp.blogspot.com/2021/02/waybills-part-79-weight-stamps.html ). An example is below, from that post. 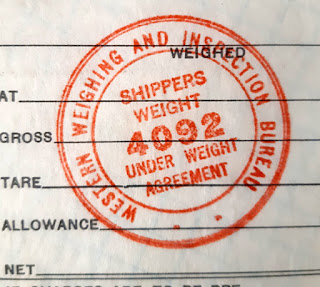 But it would still be valuable to know the regional boundaries, because obviously a waybill originating within a particular region should carry that region’s weight agreement stamp (if the shipper has such a stamp). So I continued to explore this question.

I have now found two maps of the territories of the tariff associations, only slightly different from each other, dating from 1925 and 1940. I will show the 1925 version below, taken from page 28 of a book of that date (Grover G. Huebner, The Fundamentals of Traffic, Traffic Service Corp, Chicago, 1925). I explain some of the details below. My apologies for the center glitch, as the map was laid out across the book’s gutter a little poorly. (You can click on the image to enlarge it if you wish.) 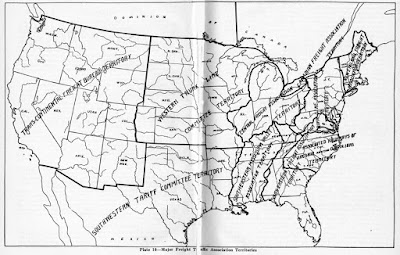 Note in the map that there is a vertical line within Canada, just at the top of Lake Superior. This was the division between the eastern and western parts of the Canadian Freight Association.

Several of the major territories in the map were previously known to me, and the Weighing and Inspection Bureau or WIB for each had approximately the same name. The far Western states under the Trans-Continental Freight Bureau, and the upper Midwest under the Western Trunk Line Committee, are well documented. Two of the other areas are complex because of multiple entities, and I will try to clarify. 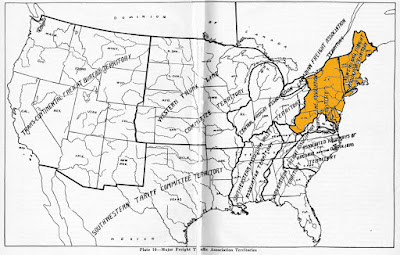 Another complex area is the Southern Tariff Association, combining the Southeastern Mississippi Valley Association, the Associated Railways of Virginia and the Carolinas, and the Southeastern Freight Association. This essentially includes states east of the Mississippi and south of the Ohio River, then wrapping south of West Virginia and including Virginia. I have indicated this below in blue. Here again, the separate tariff territories administered the Southern WIB collectively. 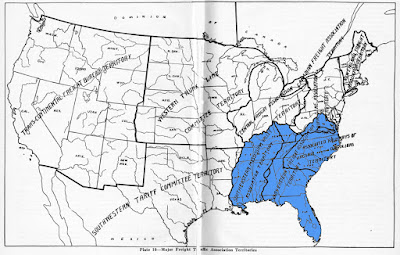 Another interesting point in all this is that the Southwestern Tariff Association territory shown, covering Texas, Oklahoma, Arkansas and Louisiana, plus Mexico, was later subsumed into the Western Association. This appears to have happened after World War II, but I am still trying to find out more about that history.

So what’s the point of all this? I’ve already stated it: any waybill’s origination point lies within one of these territories, and should bear the corresponding stamp, if it has a stamp. Here’s an example, from the Easter WIB: 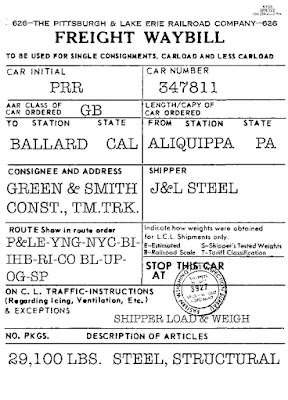 With the map shown in this post, I can correctly apply the right WIB stamps to waybills, and in fact will have to go back and correct a few previous waybills that were prepared without sufficient knowledge. Just another step toward more accurate waybills for layout operation. (And by the way, if anyone can offer additions or corrections to my descriptions here, it would be greatly appreciated.)