Proportions of a freight car fleet

Most model railroaders have a collection of freight cars that meets some expectation or another, from at one extreme, a “what I like” collection, to the other extreme of a carefully curated set that is correct for locale and era. Not everybody is interested in curating their models, and I understand that. This post is about having some degree of realism in the freight cars you own and/or operate, to the extent that realism appeals to you.

I have written about this topic a number of times previously, though today I will touch on aspects not previously discussed. And because of the multiple previous posts, I will move along fairly smartly in the present post, so if any of the material seems unclear, please consult the posts cited at the end of this one, for background.

Around 25 years ago, Tim Gilbert and Dave Nelson offered a very interesting idea: that at least on main lines of most railroads, the “free-running” freight cars, particularly box cars and gondolas, would move around the country somewhat randomly, as needed by shippers. That in turn suggests that the frequency of observation of any particular railroad’s freight cars, anywhere in the nation, would be in proportion to the size of that railroad’s total freight car fleet, relative to the national fleet.

They provided actual freight train data from conductors’ time books, and at least on bridge-route type main lines, the hypothesis seemed to have support. Gilbert and Nelson were quick to point out that their idea would not apply to freight cars with specialized equipment or assignments, notably tank cars, nor would it apply to most branch lines, for example coal branches.

But it’s clear that the Gilbert-Nelson hypothesis leaves all of us needing to be, as I think Jeff English first said, Pennsy modelers, as the Pennsylvania Railroad had, by a considerable amount, the largest freight car fleet in the United States. It also tends to make us modelers of the other “biggest freight fleets,” New York Central, Baltimore & Ohio, Milwaukee Road, Santa Fe, and Southern Pacific.

What do the data look like on this topic? I believe that the first person to emphasize railroad car fleets entirely by size was John Nehrich, in the January 1989 issue of Model Railroading magazine. He was interested in car reporting marks as such, not in total railroad ownership, so he omitted railroad subsidiaries with separate reporting marks (such as the Omaha road within the CNW). He also chose, for reasons I don’t know, to report data for 1949.

I made a new graph of the same data, correcting them for the year 1950 (from the April 1950 issue of the Official Railway Equipment Register, or ORER), not only to have a “rounder number” for the year, but to go beyond the large bulge of carbuilding after World War II. I also added in the subsidiaries of relevant roads, and produced the graph you see below (road names with asterisks have subsidiaries added in), still listed in the order Nehrich used. 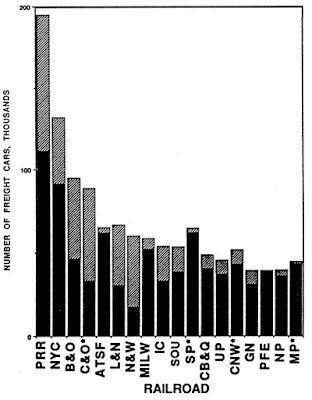 In this graph, the shaded part of each bar is the total ownership by that road of hopper, ore and ballast cars. It seemed to me that in assessing interchange around the United States, we have to recognize that most coal and ore traffic was not long-distance, and moreover in many cases mostly on home rails. In addition, coal and ore cars were certainly not free-running cars in most circumstances. Also omitted are ballast cars, for the same reasons. In other words, the black parts of the bars in the above graph shows the railroad ownerships most likely to show up anywhere in the country.

Accordingly, I re-plotted the data you see above, keeping just the black bars and re-ordering them by size. That produced the following graph of, if you will, the biggest interchange fleets in the U.S. The PRR and NYC remain the largest. 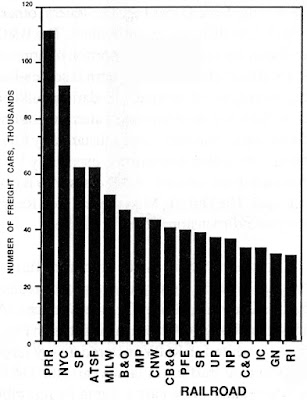 I of course recognize that if you model a railroad that handled a lot of coal or ore, or adjoined such a railroad, this graph may not suit you; but I believe it suits most of the United States.

At this point, I know that our Canadian friends are beginning to growl about the omission of the Canadian roads. Where do they stack up in this kind of ranking? In the graph below, I have inserted the Canadian National and Canadian Pacific data from the April 1950 ORER, as orange bars. 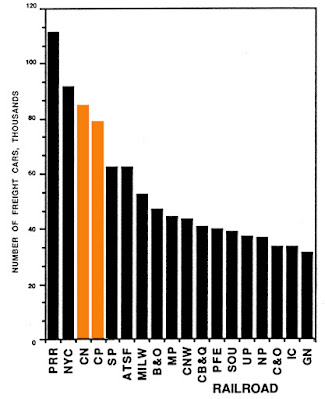 You can see immediately, if you didn’t already know, that CN and CP did indeed own extremely large freight car fleets. But if we focus on the United States, every piece of information I have found about Canadian cars operating in the U.S. shows at most 10 percent, and usually less than 10 percent, of those fleet numbers were in the U.S. at any one time. Obviously if we decrease the orange bars to 10 percent of the size shown above, these reporting marks fall far down the chart. That’s whey I omitted them above.

I’ve written extensively on this general subject, and the foregoing is just a summary. For those who would like to read more, I might recommend first my article in Model Railroad Hobbyist, the issue for December 2011.  There are also a number of prior blog posts, perhaps most usefully these two: https://modelingthesp.blogspot.com/2010/12/choosing-model-car-fleet-2.html and a later example with  more specifics, including some calculations for illustrative railroads: https://modelingthesp.blogspot.com/2012/12/choosing-model-car-fleet-numbers-part-2.html . I’ve also written a discussion about the meaning and frequency of “free-running” freight cars, for those less familiar with that idea (if you like, you can find it here: https://modelingthesp.blogspot.com/2017/05/free-running-freight-cars.html ). In a future post, I will delve deeper into this topic.

Posted by Tony Thompson at 9:41 AM