Cars on the layout for an op session

Not long ago, I received an interesting question about operating (or op) sessions via email. The questioner didn’t want to be identified, so shall remain anonymous, but I thought it might be useful to explore the topic that was raised. And that topic was, selection of freight cars to populate the layout during op sessions (implied, of course, is that the layout owner has far more freight cars than can be on the layout at any one time, certainly a description that applies to me).

I have discussed several times how I set up the layout for operating sessions, including some description of car selection (see, for example, the post at this link: https://modelingthesp.blogspot.com/2021/07/selecting-cars-for-op-session.html ). But the questioner wasn’t so interested in setting up, just in car choices. So here’s an overview.

I always start with home-road cars. My layout models the Southern Pacific, so of course the SP’s cars will be very visible. However, I’m aware of several studies of SP yards and trains (and a few conductor’s books), all of which show home-road cars to be around 25 to 35 percent (for example, see the analysis here: https://modelingthesp.blogspot.com/2011/03/modeling-freight-traffic-coast-line_11.html ). So I keep that in mind in considering whether there are too many or too few SP cars present.

A related point is that Pacific Fruit Express, owned equally by Southern Pacific and Union Pacific, would be the supplier of most empty refrigerator cars spotted for loading. The exception would be in peak harvest season (August to October), when up to a fourth of all empties loaded would be borrowed cars from other owners, heavily ART and BAR, but also others such as MDT or the FGE family (meaning FGEX plus WFEX and BREX).

Second, I believe that the cars of the largest freight railroads will always have a presence, if not in one particular session, certainly in the next. In the top five for size, along with SP, were the Pennsylvania, New York Central, Santa Fe and Milwaukee Road.

It’s well-known that the SP and the Santa Fe were fierce competitors in much of SP’s territory, and further it’s known that both railroads tried very hard never to spot the competitor’s empty freight car for loading on their own lines.

But of course inbound loads from elsewhere in the country could quite likely arrive on either road in the competitor’s car. So the only special point to recognize is that when those cars were made empty, they were returned directly to the owner, almost never spotted for local loading. But they will certainly be present.

Next is a list of the remaining “top 15” railroads.  I repeat below the graph for 1950 that I have shown previously in several places, showing the size of car fleets, minus coal and ore hoppers. (For a defense of the adjustment, see this: https://modelingthesp.blogspot.com/2021/05/proportions-of-freight-car-fleet.html , or my article in Model Railroad Hobbyist for  December 2011). 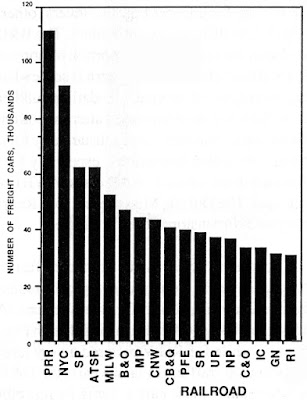 You can readily see the railroad names to the right of the Milwaukee, which are my other “try to include” reporting marks in any session. Although Gilbert-Nelson suggests that much traffic is just in proportion to the graph bars you see above, I still tend to use MP, CNW, CB&Q, UP and NP above most of those roads.

A further point is that Western railroads in the early 1950s, whether or not they served any grain-growing regions, had significantly higher percentages of box cars than the national average. Accordingly, the cars you are most likely to see on my layout from the Western roads are going to be box cars.

Fourth, I make an effort to include smaller railroads, ones that don’t appear in the graph above, like Western Pacific, D&RGW, DT&I, Central of Georgia, or B&M. And of course I try to include an occasional car from the “residue” little railroads or little car fleets, as I described recently (consult this post: https://modelingthesp.blogspot.com/2021/05/the-unusual-cars-on-your-freight-roster.html ).

So when you see a scene like the one below, with a bunch of cars in the yard at Shumala on my layout, it is no coincidence that you see a B&O car, along with a New York Central flat car and a UP box car. Cars from the major railroads are present on purpose. 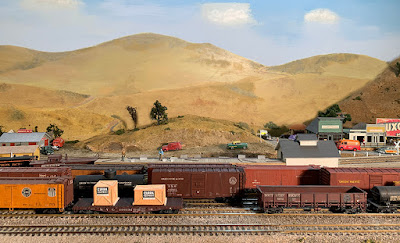 And at the same time, most sessions will include a car from a small or a very small railroad. An example is shown below, from a recent operating session, during switching in my layout town of Ballard. Spotted on the house track is a car from Minneapolis, Northfield & Southern (MNS), a railroad that only had a 100-car fleet: all PS-1 box cars, built in 1952, like the one shown here. 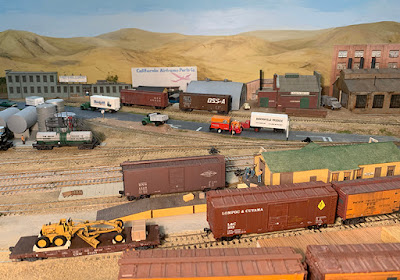 I should also mention that in the foreground, spotted at Guadalupe Fruit’s loading platform, is a car from the Lompoc & Cuyama short line (for more on the latter, see this post: https://modelingthesp.blogspot.com/2012/03/survival-from-my-old-layout.html ). Cars from the L&C show up very rarely on the layout.

My points here are that I do have a scheduling system, and I do call on waybill sequences for some of the car choices for operating sessions. But I also make sure that other criteria for representing railroads are fulfilled. I can and do juggle whatever the “scheduling” throws up. I think my position on this is that any layout contains an awfully small sample of freight cars, and can easily represent a pretty unusual lineup of cars; but I would like to have sessions appear more “typical”of averages, so make changes to suit.