Most modelers naturally concentrate their industrial building choices for rail-served industries, and supply one or more sidings to serve those industries. But it is natural that there are other industries, large and small, that don’t have rail sidings, and may either work via team tracks for rail service, or perhaps not handle any rail shipping at all.
The present post is about creating another off-line industry for my layout, small enough not to rate a rail siding. It’s a variation on the old layout classic, the junk yard, though in fact prototype junk and scrap dealers exhibit a wide gamut of size and sophistication. Here’s how I know.
When I lived in Pittsburgh, PA and was a member of the Pittsburgh Model Railroad Club, one member’s mother worked for a scrap broker, and accordingly I learned a lot about grades of scrap sold for recycling. In particular, I learned that the classic model railroader’s load of scrap, with everything from steam locomotive air pumps to 55-gallon drums to junk automobile bodies, is in fact most unlikely. This kind of mixed scrap is the very lowest value category, and even the lowliest junk yard in fact would sort its scrap.
With that in mind, I set out to model a scrap operation that worked with a limited range of materials. I would mostly have space for it between some of my trackage, and the backdrop, so needed to figure a small footprint. The obvious approach was a scrap pile or two, and a bounding fence.
I began with cutting an oval piece of 1/16-inch styrene. On top of that I formed a shallow pile of Sculptamold paper mache. The photo below shows the pile, with a penny for scale.

The next step was to spray the pile flat black, so that any scrap glued onto it would have no white showing in the inevitable gaps between pieces.
I have a substantial accumulation of discarded or unneeded parts from old kits (who knows why stuff like this gets saved?), so decided to start gluing these parts to the black-painted pile. I used canopy glue in the first group of parts additions, then added some more individual items until the surface was pretty well covered. I then dusted the pile with Tamiya “Red Brown,” color TS-1.
Below is shown the pile at this point. You can see that the majority of added parts are old horn-hook couplers. (These are often referred to as “NMRA couplers,” though the design was never adopted or even promoted by the NMRA. It’s true that an NMRA committee came up with the design, but the NMRA rejected it as even a recommended practice.)

I also similarly painted additional scrap couplers so they could be added loose on the ground in the scrap yard.
The scrap yard “industry” was chosen to comprise merely the parts pile shown above, as touched up with Burnt Umber and Burnt Sienna to emphasize a rusty look, and a wood fence around the small yard. An old paper-built building was re-purposed as the office. I also made a business sign to identify what it does. 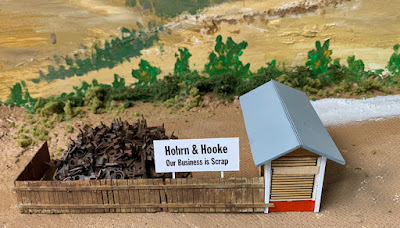 Yes, the business name is “Hohrn & Hooke.”
This small industry fills in an empty part of the layout, and adds some interest in that area. I guess I should also add, “Happy April First.”
Tony Thompson
Posted by Tony Thompson at 11:18 AM