In the previous post, I described a prototype Southern Pacific cab-forward class, AC-4, for which I had the Broadway Limited (BLI) model in HO scale. I showed appearances of these locomotives in service, and indicated the need to add a backup light to the BLI tender. That post can be found here: https://modelingthesp.blogspot.com/2020/04/preparing-model-cab-forward-for-use.html . Now I turn to lettering my undecorated model.
The BLI model was moderately glossy, so I could apply decals directly. I used Microscale set 87-75 for “Southern Pacific Heavy Steam.” It permits selecting correct-size lettering for tender sides and rear, as well as cab sides, front number plate, and number boards. In this lettering, I was guided by the excellent source book, Southern Pacific Painting and Lettering Guide (Locomotives and Passenger Cars), by Jeffrey Cauthen and John Signor (2nd edition, SPH&TS, Upland, CA, 2019.
I needed to add the tender backup light. I found in my stash of steam locomotive parts a Kemtron part no. 7519, a Pyle National headlight casting. I attached it to the rear of the tender deck with canopy glue and painted its exterior black. I painted the interior of the casting aluminum. 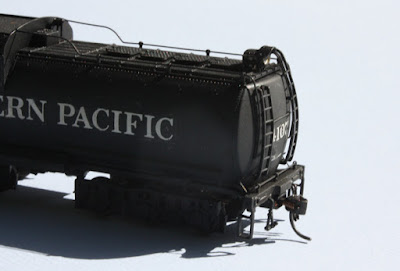 The cab-front number boards are illuminated, so the Microscale decal set’s inclusion of “indicator numbers” in correct stencil form and with clear rather than white numbers is a nice touch. Lettering the cab sides is an important part of the final appearance. The number plate below the headlight is also numbered. You can see the hole, centered between the windows, where the water cooler was removed. This will be filled and painted. 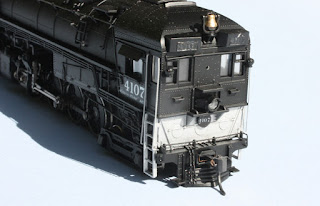 With these areas completed, one can appreciate the entire locomotive, quite an imposing model, especially for my branch-line layout; but of course, this engine will only operate on the Coast Division main, which does pass through the layout.

Having already lightly sprayed the engine and tender with flat finish, I was almost prepared for weathering. But first, one anomalous part of the model decoration had to be corrected. Why on earth Broadway Limited chose to paint the cab handrails and ladders silver is beyond me — I have pored through Bob Church’s book, Cab-Forward, without finding a single example of such painting — maybe they thought it “looked nice.” The only possible suggestion I could make is that some prototype photos do show the lower parts of these locomotives a dusty or grayish color, but always these ladders and handrails are a color that matches the rest of the engine in that area. 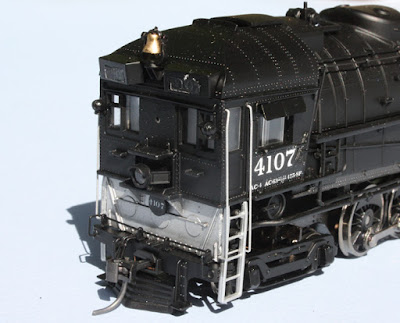 As far as I’m concerned, these parts have to be painted black to be realistic, and then I can weather. Here is that job completed, along with filling the hole between the windows. 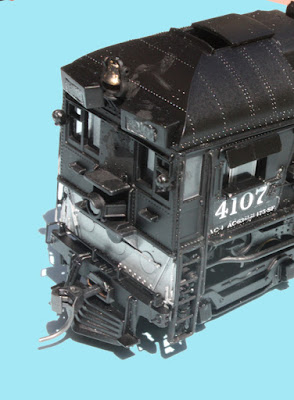 I decided not to make the locomotive exceedingly dirty. Many railroads in the last days of steam did entirely neglect the appearance of such locomotives, but photos show that SP was not nearly so neglectful. Even at the very end of steam, many locomotives were presentable. Here is the locomotive on the layout, operating cab-hop (as I discussed in an earlier post: https://modelingthesp.blogspot.com/2020/03/big-locomotives-on-small-layouts_17.html ). 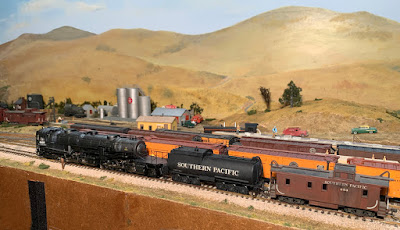 This is a fine-running engine and I am pleased to have it lettered and lightlyweathered, along with a few details corrected. If there is one locomotive that shouts “Espee,” it has to be the cab-forward.
Tony Thompson
Posted by Tony Thompson at 10:39 AM