Some time back, I posted a description of the Southern Pacific’s distinctive “whaleback” tenders, or as the SP classified them, “semi-cylindrical” tenders, to differentiate them from true cylindrical tenders of Vanderbilt design. You can find that post here: https://modelingthesp.blogspot.com/2018/07/sps-whaleback-tenders.html .
In that previous post, I showed a photo of SP Consolidation 2601, showing its right side. The image is from Bakersfield in 1950, taken by Francis Smith. Here is a repeat of that view: 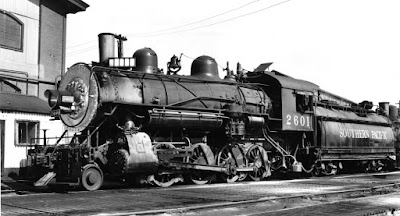 Both shots are good images of the 73-SC-1 tender (7300 gallons) then assigned to this locomotive (a diagram for that tender class was included in the previous post — a link to which is provided in the first paragraph of the present post). Both photos also show the distinctive slanted steam chests of small Harriman steam power.
When locomotives like this were relegated to yard switching in late steam days, they often had their small boiler-tube pilot removed from between the footboards, and the indicators (number boxes) were removed from the upper smokebox. Here is an example, a Sacramento photo of SP 2590 from my own collection (photographer unknown). Note that the fireman has lost control of adding water to the tender. 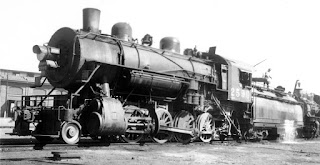 I wanted to extend my upgrade of the newer of my examples of SP Consolidation models with whaleback tenders, SP 2575, shown in the previous post. Accordingly, I completed the tender lettering. In that previous post, you could have seen that it was not complete, but of particular concern is that the locomotive number had not been applied to the rear of the tender. I corrected that, along with adding the engine number to the number plate beneath the headlight and “extra” (“X” prefix) numbers to the indicators. I then added a coat of flat finish and some acrylic weathering.
Next came a cab crew. I had some assorted HO scale engine crew figures, for most of which I don’t know the origin. Since the seat boxes are often too high in model brass engines, crew figures many times will need a little “surgery” to fit correctly in their positions. One figure I did recognize was an engineer from Weston, acquired years ago. He was “shortened” and installed with canopy glue.

I don’t recall the maker of the fireman, but he too had to be shortened, and installed with canopy glue. This view also portrays the finished front of the locomotive.

It has been fun to do the final work to complete this locomotive, adding the missing lettering and cab crew, and applying some light weathering. The locomotive can now join the other Harriman Consolidations in my fleet, and can take on assignments on my layout.
Tony Thompson
Posted by Tony Thompson at 10:46 AM