Preparing a model cab-forward for use

I have long owned a couple of brass cab-forward models, and also own both the InterMountain and Broadway Limited models. This post is about prep work for the Broadway Limited (BLI) model.
The BLI model is an SP Class AC-4, the first of the “modern” single-expansion 4-8-8-2 designs. I won’t go into the history of this or other cab-forward classes, in light of Bob Church’s excellent history, Cab-Forward (Central Valley Railroad Publications, Wilton,  CA, revised edition, 1982).
But to summarize, the AC-4s were ten of the “flat-front” engines, nos. 4100–4109, and were distinguished among cab-forwards by being the first to have the new 16,000-gallon Vanderbilt tenders.
When this model was released, I examined one at my Local Hobby Shop (please support yours!), and after looking it over and approving the overall appearance, I decided to buy one. But the factory lettering was, in my view, of poor quality and incomplete. Accordingly, I purchased an undecorated one, with the intent of lettering it myself.
There are a number of good decal sets available for “SP Heavy Steam,” which certainly describes these engines, from California Locomotive Works, Foothill Model Works, Microscale, and other sources. But note that SP steam locomotives were never lettered in white. Until 1947, it was a paint called “aluminum bronze,” a silvery metallic color, and after that Lettering Gray, a light gray. Beware of SP decal sets with white steam lettering!
Below is a photo of the right side of one of the AC-4s (a Stan Kistler photo, used with permission). Visible here is the unique spotting feature of the AC-4 class, the raised walkway over the air pumps.Note the staining on the boiler right behind the cab. The lower front of the cab has the post-1946 aluminum band. (You can click on the image to enlarge it if you wish.)

Shown below is a view of the left side of an AC-4 (Robert F. Collins photo, J&D Studios collection, used with permission). Again, the spillage on the boiler behind the cab is very evident. Visible in both photos is the engine’s number plate, moved from between the front windows to beneath the headlight. Some AC-4s assigned to desert divisions had a water cooler between the front windows (and the BLI model has that too), but most engines across the SP system did not, as is the case for both these engines. I removed the cooler from the BLI model. 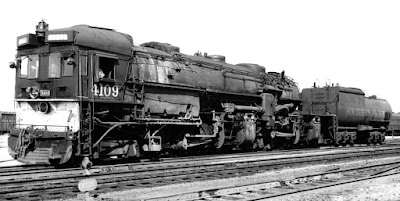 Note also in both these photos that the front number boards (the indicators) have been boxed in, so that crews could handle the numbers from inside the cab. The BLI model has this feature, characteristic of engines after about 1950.
There is good information in Church’s book about lettering appearance on these engines, but for comprehensive data, including sizes of all lettering, it’s essential to consult the Southern Pacific Painting and Lettering Guide (Locomotives and Passenger Cars), by Jeffrey Cauthen and John Signor (2nd edition, SPH&TS, Upland, CA, 2019).
I decided to number my locomotive as SP 4107, because it operated on the Coast in late steam days. Below is a photo of it at West Oakland, alongside the large sand house there (photographer unknown; print courtesy Alden Armstrong). 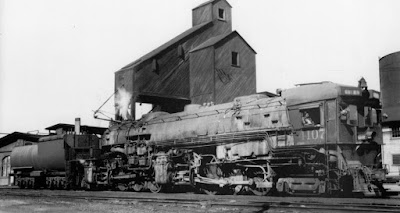 This locomotive has a lot of water staining on the boiler, more than one sees in most photos from the late steam era, and so perhaps not representative.
Before turning to lettering, I examined the BLI model carefully. The first thing one notices, if familiar with SP steam power, is the absence of a backup light on the model tender. 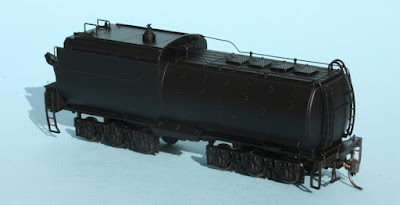 In the 1930s, SP had replaced the original Oliver backup lights with regular locomotive headlights atop the tender. They looked like the photo below (Stan Kistler photo at Los Angeles). 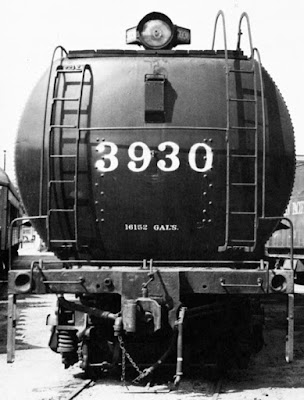 Obviously adding this backup light is an essential first step in this project.
At this point, I believed I had all the information needed, and I prepared to letter the BLI model. But I will return to that, along with weathering, in a future post.
Tony Thompson
Posted by Tony Thompson at 10:00 AM