The only really sizeable industry on my layout is a manufacturer called Jupiter Pump & Compressor, though it isn’t modeled in a large way. It just comprises some flats and a siding which appears to serve a large plant. My most recent post about it, which could be called “Part 4” in my descriptions of it, contained links for the previous descriptions (see that post at: https://modelingthesp.blogspot.com/2020/02/completing-jupiter-pump-compressor.html ).
That previous post described preparing the area in front of the Jupiter plant for a new structure. The structure chosen was the AL&W Lines kit for an SP power house, and the building of it was briefly covered in two posts, of which this is the second: https://modelingthesp.blogspot.com/2020/03/building-al-power-house-part-2.html . In that post, I indicated that the site needed additional work, and that work is the subject of the present post.
Both to tie the new structure to the surroundings, and also to provide an evident connection of the power house building to the rest of the Jupiter plant, I designed a length of sidewalk. I began by cutting some surplus light cardstock (obviously used previously to mask some airbrushing) to fit the space, as you see here. 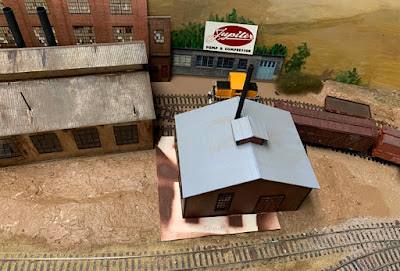 I made the cardboard cutout above to look like a reasonable-size walkway, and it came out to be about 3/4-inch wide. Thus the following step was to use Evergreen no. 4517, “Sidewalk,” in 3/8-inch squares, to match the cardstock cutout, in an integral number of squares. Here is a quick check of the white Evergreen material, cut in a single piece from the no. 4517 sheet. 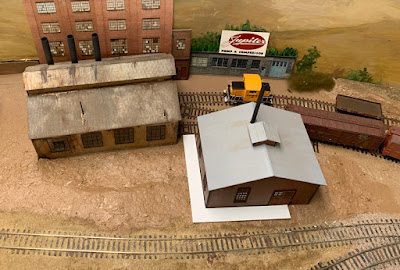 This segment of sidewalk was painted a “concrete” color. I tried the Model Master color called “aged concrete” (their no. 4875), and thought it looked good, a warm color as is often seen in concrete made with sand of a warm color.
After making sure all the alignment was as desired, and that all track clearances were maintained, I glued it to the location on the layout. Then I refined the ground contours to slope smoothly up to the walk.
I did this with my taxidermists’ paper mache, called Brandt’s Compound, a material with the great advantage that it is very fine-grained and helps create a smooth surface, as I have reported previously (see, for example: https://modelingthesp.blogspot.com/2015/01/pismo-dunes-road-part-2.html ).
I apply the material mostly with a putty knife, but it is easy and convenient to do final contour adjustment and smoothing with a wet finger. With the painted walkway in place, here is how it looked in a somewhat downward view (not an angle that a layout visitor would have): 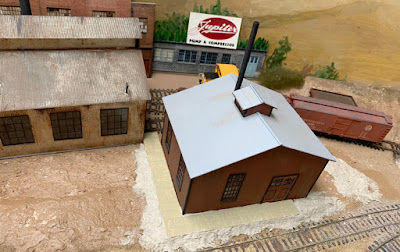 The paper mache will be painted a color to match the surroundings, and then soil and vegetation will be added; but as those are really scenery topics, I will defer them to a later post.
Tony Thompson
Posted by Tony Thompson at 10:15 AM