Southern Pacific steam power had many distinctive features, some of which (like the cab-forward articulated locomotives) were so distinctive as to practically constitute signature power of the railroad. Lesser power often exhibited features different from other railroads, too. The one I am writing about today is the so-called “whaleback” tender. This was called a “semi-cylindrical” tender, classed as SC types by SP, and that is a good description of these half-cylinder shapes.
Many of the larger SC tenders were built for cab-forwards, and in later years, as some of the older cab-forwards went to scrap, were re-purposed for other locomotives. But there was a smaller class of 7300-gallon tenders that were built new by Baldwin for Consolidations in 1903. These continued in service on a range of smaller steam power in the late steam era.
The diagram for these tenders is shown below. Dimensions are identified but details such as handrails and appliances are not. This is intended to be just the basic car. (You can click on the image to enlarge it if you wish.) 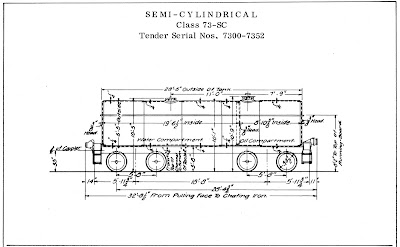 Photographs of these tenders in later years show a range of modifications that had happened over their lives. This is of particular interest to me, because I have chosen to model steam power that was assigned at San Luis Obispo toward the end of the steam era. That’s because my layout’s mythical SP branch, the Santa Rosalia Branch, would have used power from San Luis.
For a number of years, there was a Consolidation assigned there, SP 2592, with one of these 73-SC tenders. It’s shown below in a Rod Crossley photo from January 1954, after my modeling era.

The tender appearance and lettering of my model were matched to this photo, as you see here with the engine switching in my layout’s town of Shumala. Note that my model is fairly heavily weathered, to look like the prototype SP 2592 shown above. 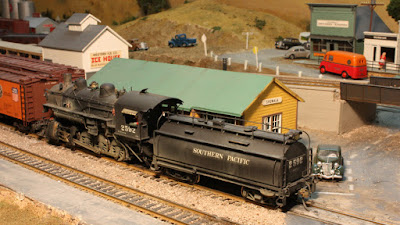 The road  name on the tender is the 9-inch lettering specified for smaller tenders after 1945, as shown in the reference book, Southern Pacific Painting and Lettering Guide (Locomotives and Passenger Cars), by Jeff Cauthen and John Signor, SP Historical & Technical Society, Upland, CA, 2013.
Most of the 2500-series SP locomotives were Class C-9, one of the larger SP locomotive classes (221 engines, all from the Harriman era; UP had an additional 291 of the C-9 design). The series 2513–2599, 86 engines, were built in 1906-07. A previous group of 47 C-9 locomotives, in the series 2752–2799, had been built in 1905-06, and 26 more arrived in the numbers above 2800 in 1907. They were delivered with both rectangular and Vanderbilt tenders, but like many SP engines, swapped tenders frequently through their lives. Both my model C-9s with 73-SC tenders are in the 2500 number series.
The photo above shows relatively small 9-inch tender lettering of the road name, but some of the whaleback tenders were given the post-1946 larger lettering, either 12 inches or 15 inches high. Shown below is a Francis Smith photo at Bakersfield in 1950, with Class C-2 Consolidation 2601 as the power, and the tender has the 15-inch road name.

My second model with this tender type has the larger lettering, and I like the variety. This engine remains freshly painted, and still needs some weathering, though not necessarily as much as SP 2592. It is shown on the turntable at Shumala on my layout, with an SP tank car in the background delivering another load of Bunker C locomotive fuel. 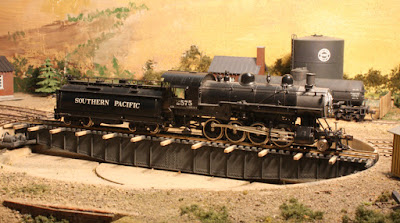 These tenders make an interesting contrast to the otherwise-ubiquitous Vanderbilt tenders of so much SP steam, and I enjoy having them on my layout. It’s an added bonus that I know at least one such tender was active at San Luis Obispo in the period I model.
Tony Thompson