For the 100th issue of the on-line magazine, Model Railroad Hobbyist (which was the issue for June 2018), editor Joe Fugate came up with the idea that the whole roster of the “Getting Real” column should each offer a short contribution. Normally the five (or sometimes four) of us submit columns in rotation, and that is how they ordinarily appear in the magazine, but for this special issue, we all contributed. (For those who don’t know, you can read on-line, or download for free, at any time, any issue of MRH via their website, www.mrhmag.com .)
We were all asked by Joe to comment on the following three aspects of our own prototype modeling, and I quote:

“1. You didn't start out a prototype modeler from day one in the hobby I suspect. How did you start out in the hobby and when did the ah-ha moment come for you that led to you being a prototype modeler? What sparked you to choose this route for your modeling?
2. Things almost never go exactly as planned. Tell us how it has gone – what do you really like about prototype modeling, and what hasn't gone like you expected? Any nasty surprises along the way? Any pleasant unexpected windfalls?
3. Any horror stories? Epic fails? Have you done any total re-dos? And also find the silver lining if you can and tell us about that.
This may be a lot to cover in 800–1200 words, so you will need to be fairly brief. If at all possible, pick things to write about that can be illustrated from your photo collection or with a diagram.”

As you would see by reading each of our contributions, we all had quite different “takes” on the assignment, along with fairly different backgrounds and trajectories through modeling. My own comments would likely sound generally familiar to anyone who reads much of this blog.
One image I decided to use in the article was a new one, taken to show Willow Lake Road in my layout town of Santa Rosalia. The town is at the mouth of the Santa Maria River, and has a practically perpetual marine cloud (or fog) layer out over the Pacific.  I enjoyed building an SP CS 22 depot from the American Model Builders kit, and one end of the depot is alongside the road, right across from the Harbormaster’s trailer office. (Both structures have been discussed in prior blog posts; the depot was described in a series of posts, ending with: http://modelingthesp.blogspot.com/2015/05/sp-depot-santa-rosalia-part-4.html , whereas preparation of the trailer office was described in this one: http://modelingthesp.blogspot.com/2017/05/house-trailers.html .) 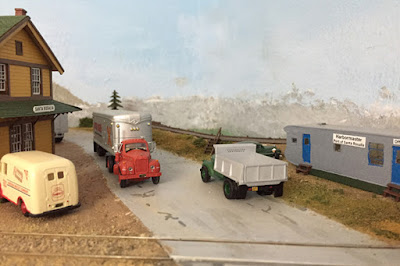 In this view, the rails in the foreground are almost at the end of the branch.
The “assignment” we were all given was a thought-provoking one, and I enjoyed the chance to look back and reflect on how I’ve gotten to where I am today, with prototype modeling. As my essay explains, I have for some years aimed at layout operation that is both prototypically accurate and also interesting for visiting operators. I think I’m getting there.
Tony Thompson
Posted by Tony Thompson at 8:51 AM