By “black” I mean the color black. It comes into modeling in a variety of ways. Most modelers know that objects that are black in the prototype ought not to be painted pure black as models, because it is just too severe. Instead, we use “warm black” or “grimy black” or some other modified color so that we can see the details on the model, rather than have them swallowed up by pure, dead black.
But there are other places that the color black might show up in modeling, outside of models of such things as rolling stock. These include things outside the layout itself, such as fascia, support legs, and drapes. Here we actually want the effect I just mentioned avoiding with models, namely for everything about the object to be swallowed up by the deadness of black. As many know, this is an old theatrical technique, used for stage props, background areas the audience ought not to notice, and even something like a stool that a single actor might perch upon, but wants attention on him or herself, not on the stool. Dead black, especially flat black, magically makes these things invisible.
Having hung around with theater people a little bit when I was at Carnegie Mellon University, with its renowned drama program, I was familiar with this trick. So when I was first going to have an open house for my layout in Pittsburgh, I thought of painting the legs and braces under the layout, making them all flat black. I was surprised, though, how powerful this effect is. Suddenly you simply can’t make your brain take notice that there are legs under the layout. Of course, being black, they are visible, but some odd spot in our brains refuses to notice stuff that is dead black.
Shown below is one example of my old layout legs, black as stated. All around you can see some of the storage containers, wiring, etc. underneath the layout, which I would prefer to hide. But the black legs really did disappear, when these legs were exposed under the old layout. The inner parts of the leg unit, which weren’t visible from the aisle, weren’t painted. 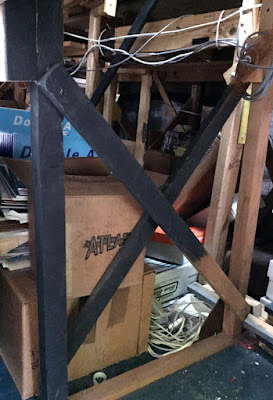 The same dramatic impact of black applies, of course, when drapes or other coverings are applied under the layout. Most of us do store “stuff” under the layout, and not only do drapes hide it, but if they are black, they fall below our level of notice. My wife was kind enough to make me a set of black cloth drapes, all attached with Velcro so as to be easy to remove or attach, and these are most effective. Here is the same area shown above, but now covered by a drape. This is just cotton cloth. 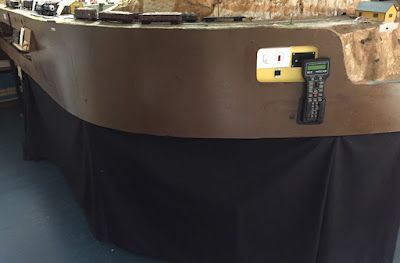 The difference in appearance is dramatic, and certainly much preferable. It’s nice if legs can be made to disappear, but even better if the entire under-layout area can be made to disappear.
But what about the fascia? Some modelers have chosen to make the fascia black also, for the exact same reasons. Personally, though, I don’t agree with that idea. Black is awfully stark when adjoining the layout surface, and if anything, calls attention to itself. Something less stark looks better to me.
I think a fascia ought to be clearly distinct from the layout surface — after all, it is kind of a vertical cut through the world, located at the edge of what we have modeled. To me, it shouldn’t look like part of that world. Black at least meets that criterion, though perhaps too strongly. At the other extreme are choices like green, blending with the green vegetation on the layout, or California golden-grass tan on a California layout. These seem to me to be extending the “layout world” down over the edge, and to me, that looks a little funny.
Colors like those greens or tans also may fall into another category, the “designer” look. I recall visiting a layout (which I won’t identify) that had a dark blue fascia. It was in a basement where part of the room area was a family room with window curtains of the same blue, so it made the layout look nicer as part of the room, but looked very odd as a component of the layout. Various other colors of this kind, which may be handsome colors but call attention to themselves, seem to me bad choices.
Then there are what I call “neutral” fascia treatments. These are choices that don’t call attention to themselves, but tend to fade into the background of the room, rather than blending with or strongly contrasting with, the surface of the layout. I have seen a fascia that was a warm, dark gray, and it looked fine. Another choice, which happens to be mine, is to use tempered Masonite and leave it natural in color (though I give it a coat of shellac). Some fascias I have seen are probably made out of Masonite, but are then painted a color very similar to that of natural tempered Masonite. I guess because it’s a natural color, it comes across as neutral.
Just to illustrate my own choices, the area near what was shown in the photo above does depict the fascia (this happens to be a large expanse of it). The drape below it tends to disappear from view, of course, since it’s black, 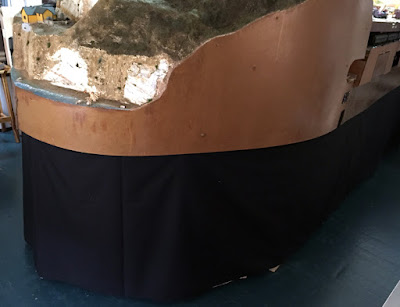 These are, of course, personal choices, and I would never assert that there are “right” or “wrong” answers for these choices. The foregoing commentary just represents my own thoughts on the topic, and whether or not you agree with me, I hope you too find it worth thinking about.
Tony Thompson
Posted by Tony Thompson at 4:36 PM