I was recently reminded of something that I had first done years ago, when I and my layout lived in Pittsburgh, PA, and sometimes visiting operators would bring equipment to include in an operating session. Essentially, all I did was tell them that the cars had to meet my operating standards (I have described my operating standards in some previous posts, particularly in this one: http://modelingthesp.blogspot.com/2011/03/model-freight-car-standards.html ), but I called my test a “rookie test,” with their car(s) as the rookie(s) in question. I will return in a moment to what that test involved, but first let me explain what brings it to mind now.
I hate to mention it, but my very good friend, the late Richard Hendrickson, for all his considerable skills in researching and building model freight cars, did not actually operate them, as the layout he was building never reached operational status. The cars lived in display cases, so there was no need to think about operation. But when he came to Pittsburgh in 1989 as part of a trip to attend an RPM meet in Troy, New York, he brought along a bunch of his freight cars so they could run on my layout. In addition, he had planned to photograph them on my layout, and the photos would be used in one of editor Bob Schleicher’s “Prototype Modeling” features in the then-thriving Railmodel Journal magazine. (It was published in the issue for January 1990, pages 10-13).
All that was fine, and I was flattered to have my layout as the setting. But as they came from the carrying case, the cars were inoperable. First, most had truck screws turned down tight. This kept trucks aligned with the long axis of the car, making them easy to take out or put into Richard’s display cases. But of course cars like that can’t operate on any but dead straight track. Second, couplers had been painted a lovely rust color, but the paint in many cases had glued the knuckles shut. And third, most trip pins on his Kadee couplers were far too low, and would hit road crossings or even high ties on my layout.
I trotted out the “rookie test” system, and most of the cars were quickly corrected and put into operation, as indeed was usually the case with other visiting operators’ cars. But what brought this to mind? I inherited most of Richard’s freight car fleet, and there are still a few entering operation on my layout for the first time. I most certainly do exercise the rookie test on each one, to make sure it can run all right.
All right, so what’s the rookie test? First, it involves checking coupler height. This mostly means the coupler head is at the same height above the rails as the Kadee coupler gauge.

When this test isn’t met, it may mean adding a truck washer to increase coupler height, or perhaps some material removal on the body bolster or truck bolster to decrease height.
But also it should mean checking the trip pin height. This height really only has to be sufficient to be above the rail head in most situations, but the shelf at the bottom of the Kadee gauge allows one to be conservative and set the trip pins a bit higher than the rail head. I usually do this. 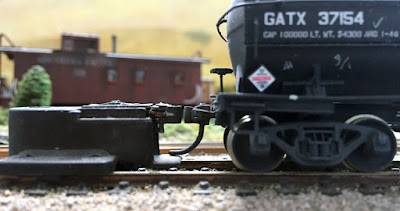 Third, and very important, couplers must swivel freely and the knuckles must freely open, and then spring back closed when released after opening. This is where paint is the culprit, as it gets into the mechanism and prevents the coupler spring from doing its job. This is not always an easy fault to fix, but touching a brush wet with paint thinner to the knuckle area usually works. 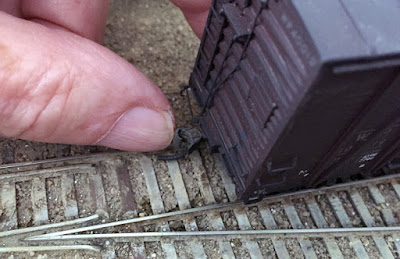 Last, I check truck swing. The truck should rotate freely and be capable of wide swings. It’s easy to correct if loosening the truck screw fixes it. Of course that may not always be true, as with the brass car seen below, where shortening the spring on the truck screw may be necessary. 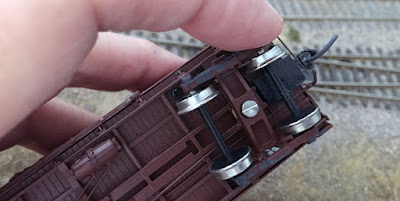 As I said above, I still use the rookie test on any car not recently operated on the layout, just to make sure. Most of my cars today are fine, but I still like to check. And I still double-check any of my Richard Hendrickson cars!
Tony Thompson

Posted by Tony Thompson at 7:56 AM