For the second week in a row, I was off traveling last week to another operating weekend, this time the well-known Prairie Rails event in Kansas City. Their normal time slot has been at the end of February, but rather than wait until then, they chose to put on the event during the last week in October. I visited or operated on eight layouts altogether, but rather than mention them all, I will just write about three.

The first, one of my favorite layouts anywhere, was John Breau’s Great Northern Butte Division, a transition-era layout. The first job I had was one of the local freights, a great job because of all the outstanding towns John has built for the layout. For example, I show below my train departing from Dutton, Montana, behind a Class F-8 Consolidation. This was fun to switch, operated flawlessly, and required planning to do efficiently. Who could ask for more? 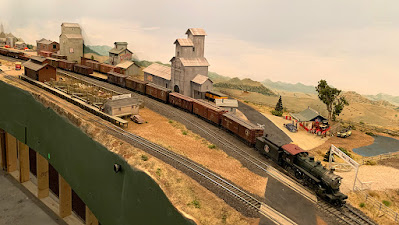 Incidentally, I spotted one clever feature on the layout (among many) that I want to mention here. If you don’t have enough space for a convincing stockyard that can load four stock cars at a time, why not conceive of it being located mostly in the aisle? Then you only have to model the loading chutes and outer fence. Nice concept! 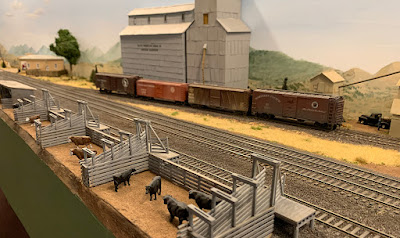 Another layout on which it’s always a pleasure to have the privilege of operating is Bob Willer’s Spokane, Portland and Seattle, set in 1967. Here I worked the Wishram yard, under the direction of Yardmaster Phil Monat. We had some lucky breaks with the right trains coming along to pick up a lot of our cars, and we suddenly realized the “yardmaster’s dream,” an almost empty yard (that’s a departing train at the rear of the photo). And that’s Phil at left, planning our next moves. 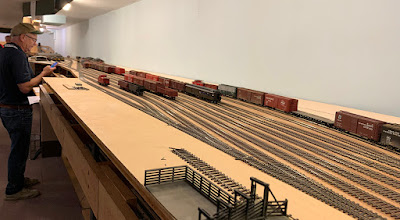 Lastly, I want to mention Bill Scheerer’s excellent smaller layout, the B&O Monongah Division in the transition era. It has gorgeous color position-light signaling, understandable since Bill retired from CSX as Chief  Engineer, Communications and Signals; you may recognize his name from the OpSig’s excellent book, Compendium of Model Railroad Operations, for which he and Mike Burgett wrote the chapter on signal systems.

In addition, the layout ran perfectly, and was fun to work. Here again, I got an interesting local freight to do some switching. The parts of the layout that are scenicked are really nice. Below is just one of them, his Kingwood Mine. 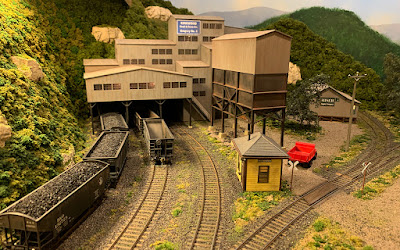 This was an intense few days, but really enjoyable, since Kansas City has so many excellent layouts. We were lucky on the weather, and I was lucky in the layouts I was assigned, and that all added up to an outstanding weekend.