An ongoing problem in preparing realistic waybills for model railroad layout operation is the identification of the off-layout industries from which your on-layout industries receive loads, or the off-layout destinations for your on-layout shippers. One can of course make these up, if desired; but what if you would like to have actual ones to use?

I have written extensively about sources of such information; for links to some of those posts, I urge you to use the search box at right, or to consult my summary guide at: https://modelingthesp.blogspot.com/2022/11/waybills-part-100-guide.html .

A source I have not seen mentioned, but which I have used myself, are railroad employee timebooks. These were intended for train-service employees to record their trips, especially the time consumed on each trip, for payroll information. But often these books were non-railroad-issued documents, privately printed and provided free because they contained extensive ads. And it’s these ads that are of interest.

To illustrate, here is a blank Shasta Division 1946 timebook page spread (date known from the dates of the employee seniority lists elsewhere in the book). You can click on the image to enlarge it if you wish. 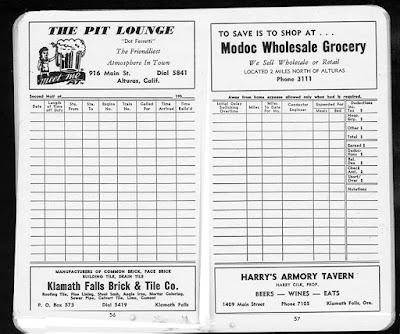 Note that the “business part” of the book is the blank entries for employee assignments. But note too the fascinating variety of ads, obviously some of them intended to appeal to a rail’s personal life (the tavern and the lounge). But note also the customer businesses (Klamath Falls Brick and Tile) and the businesses that might be both customers of the railroad, as well as serving its employees (the grocery).

Just to illustrate how a book like this was used, I show below two pages of Barry Anderson’s timebook for part of August 1953 on Coast Division. It’s a combination of yard jobs (all the ones noted as 8 hours) and road jobs. Barry sent me this copy. But this part of this book had no ads. 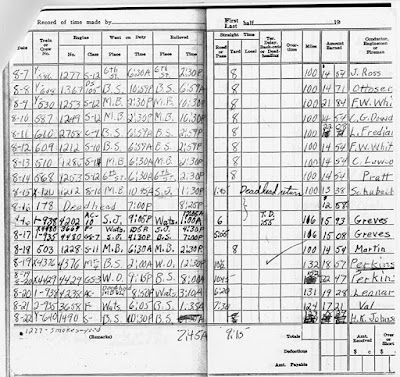 Usually at the front or back of these timebooks there would be included a division seniority list (one way we know the division of origin of each book). Shown below is another pair of pages from the 1946 Shasta Division book. The ads flank the list, and here they are all personally directed (who wouldn’t want to visit Ray’s Place?), though the Coca-Cola bottler might be rail-served. 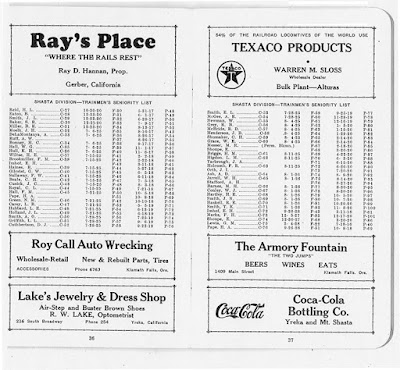 For a contrasting example, I just show two pages (pages 2 and 54) from a 1948 SP Western Division timebook, pages chosen to emphasize railroad customers rather than the more personal ads (except of course the 704 Club at lower right, with the helpful information, “railroad pay checks cashed”). This is a 5 x 8-inch size book. 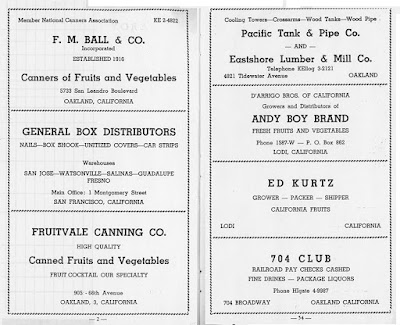 Can we use these? Absolutely. Just as an example, consider the Fruitvale Canning Co. of Oakland, with ad at lower left in the pages above. The fruits and vegetable they were canning were doubtless from the immediate East Bay and nearby Santa Clara Valley (long before it became known as Silicon Valley), but that wouldn’t preclude buying fruit from a little farther away if needed. Thus one could create a waybill something like this (as would fit my own layout); 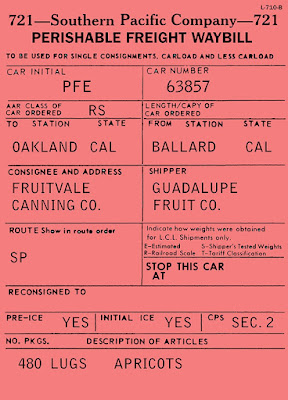 I will show additional timebook ad pages in following posts, but the introductory description here helps explain what these are and how they might be used.