Some comments about a layout visit

Over the years, I have visited many layouts during open-house events, and have also operated on a considerable number of different layouts. I often say that I have never visited any layout without seeing something interesting, or seeing some decision by the layout owner, often a problem solved, that I find worthwhile to learn. But I usually only write blog posts about operating qualities.

Today I want to make a partial exception: it’s a comment about a layout where I operated, but I also want to offer an appreciation some of the aspects of the layout I enjoyed most, beyond operation. The layout belongs to Dave Loveless, who lives near Watsonville, California, and he models the Southern Pacific Coast Line in the general area where he lives. The layout (if I recall correctly) is set in the immediate post-World War II era.

The layout runs well, with very rare derailments or electrical glitches, and it has an operating scheme that is both interesting and fun. I have run several of the local freight trains on the layout, and also have very much enjoyed the principal yard at Watsonville Junction. Last weekend when I was there, I again worked in that yard, and had the pleasure of having one of Mark Schutzer’s fine 0-6-0 switchers for power. I’ve always liked the “sausage” tenders that many of these switchers had. 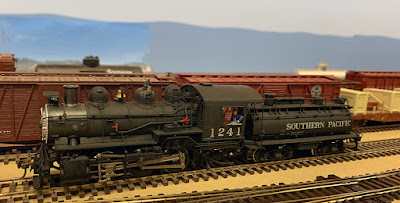 The scenery on the layout is mostly simplified, but illustrates how much can be accomplished with minimal approaches. Note above how the simple “horizon” line sets you in the real world without any details whatsoever. Another example is the scene below, with a simple painted backdrop having a “distant” horizon line, and a number of foreground trees. The soil in the area near Monterey is indeed sandy, as you see here, and the track doesn’t dominate the scene.

Included in the layout is the Army’s Fort Ord, primarily a basic training facility for much of its life, but with considerable rail traffic. For the model builder, the advantage of an army post is the similar-looking buildings, in this view barracks and warehouses, a look that I think Dave has captured very well. These groupings of the structures accomplish a convincing, simple representation. 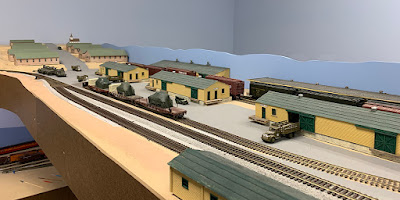 Lastly, I will mention the layout structures, many of which are simple paper stand-ins. Some modelers may look down on such structures, but they readily serve their layout purpose. Just one example is shown here, Watsonville Ice & Cold Storage. I like that it’s a big enough building to justify the three-car spot. 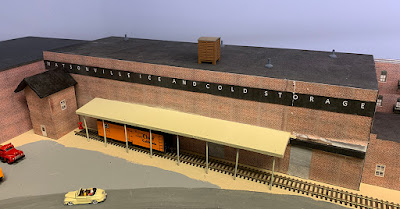 I also felt that among the layout structures are a number of which really have character. Shown below is the back of a saloon, but it would fit into any alleyway anywhere. (Not, of course, that I would know anything about the alley doors of saloons.) Maybe it’s not a great structure, just one for which I liked its looks. 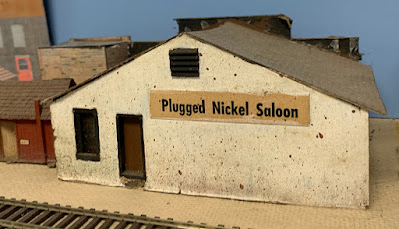 It’s a trip of a full two hours for me to Watsonville, but I always enjoy the journey to operate at Dave’s, and look forward to more visits in the future.