Back in 2002, I published a short article in the Southern Pacific Historical and Technical Society magazine, Trainline (issue 71, Spring 2002), on the method I use to model SP tank cars in HO scale. The recent release of a decal set for such tank cars (see: http://modelingthesp.blogspot.com/2011/05/sp-tank-car-decals.html), combined with some changes in modeling practice since 2002, suggest that an updated and improved version of that article could be useful. This post is that update.

A noteworthy part of Southern Pacific's freight car fleet until the 1970s was the 12,500-gallon tank cars. The distinctive size of these cars, large among American tank cars prior to the 1950s, made up 98 percent of SP tank cars in the early 1950s. In this particular case, SP modelers in HO scale are lucky, because the Athearn tank car is clearly modeled from an SP prototype. With simple modifications, this model can be very accurate.
Several earlier classes of the same gallon capacity had tank sheets with seams running around the circumference of the tank, but in 1928 General American built SP’s Class O-50-12 class cars (O for oil car, 50 for 50 tons capacity, 12 for twelfth class), numbers 58400–58574. These cars were the first with longitudinal tank seams, and this is what the Athearn model has. A very similar class, O-50-13, was built by General American in 1942, numbers 58575–58774. A builder photo of the left side of one of the -13 class at the General American plant is below.

There are several minor discrepancies between the SP car and the Athearn model. The most evident is the height of the dome. Also evident are different hand brake equipment and safety valve arrangement. All are easily changed. Other details, such as grab irons and underbody parts, can also be improved. The subtle change, not evident in every photo, relates to dome walkways. The SP cars only had walkways on one side, the left side as viewed from the B or brake end of the car (as shown in the photo above). This change is also easily made to the Athearn model.
The various improvements can be made on a painted and lettered car, although fresh paint and lettering may be easier (and the stock Athearn lettering is not accurate). The dome is a good place to start. The Athearn dome, about 10 scale inches from the top of the tank to the top of the cylindrical part of the dome, should be about 21 inches. Also, there should be two safety valves, not the three that are on the Athearn dome, and they should be paired behind the manway hinge, not spaced evenly around the circumference of the dome.
It appears that the single-dome Athearn tank car was derived from the triple-dome kit. The giveaway is the pairs of rivet rows around the body on either side of the dome, which represent the location of tank dividers in a triple-compartment car, but which should not be present on a single-compartment car with one dome. The low dome height and single safety valve per dome of Athearn’s triple-dome cars would be correct for such cars (if the Athearn triple-dome car had a prototype), but a higher dome and two valves are needed for the single-dome car. The triple-compartment origins of the model also show in the outlets. There should only be one, but an Athearn underframe has three.
Increasing the dome height is surprisingly easy. This method, shown in a sketch below, was developed from the ideas presented by Richard Hendrickson (published in Western Prototype Modeler, Vol, 3, May-June 1977, p. 17). 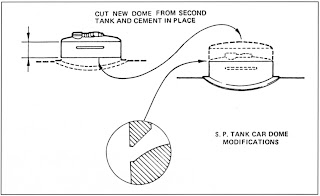 Here’s how it’s done. First, pry the manway cover from the dome of the car you are modeling and set it aside.  Second, carefully shave all the safety valves off, with a chisel blade for example, and save them also. Next, turn to a sacrifice body for another dome. Triple-dome bodies may no longer be available from Athearn to be purchased new, but it is often as cheap or cheaper to purchase assembled cars at swap meets. Saw off an end dome as close to the tank top as possible. Try to retain the full dome height if at all possible in this process. 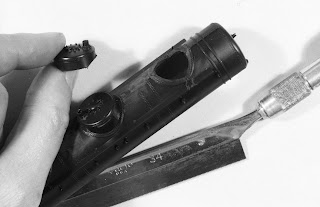 Then lightly file the cut surface of this dome top flat and level, again keeping as much dome height as possible. 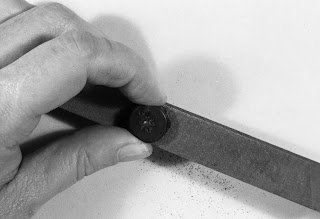 This will sit right on top of the existing dome of your model, with one further piece of work. This is to shave the inside of the additional dome top to a tapered shape, which fits atop the existing dome (see sketch above). I use a hobby knife: 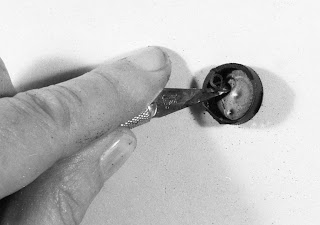 Here is the final product. The taper need not be exact, only enough to clear the curvature of the dome top onto which it will be placed. 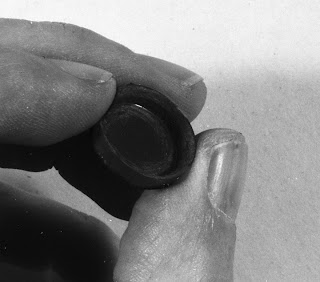 Before attaching the new dome top, shave off and save its safety valve also. Styrene cement attaches the new dome permanently. Fill any gaps with a model putty such as Squadron Green. Glue on the best two of the safety valves you shaved off the two domes, positioning them behind the manway hinge and symmetrically on either side of the centerline. When the tank top section is assembled to the tank bottom (later), the safety valves will be toward the B end. Also, shave off the molded grabs on the new dome, and replace. They must be curved to match the dome curvature, so I make them from suitable wire. Most SP tank cars only had a dome grab iron on the side of the dome above the walkway, so usually you only need to make one.
The extraneous rivets running around the body should be shaved off, and then sanded smooth. Also shave off the right side dome walkway and its supports, then sand that area smooth. Here is a body with rivet rows and one walkway removed, and the new dome top attached (a little putty was needed): 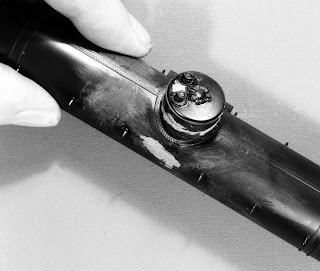 At this point, I also shave off the molded grab irons on the tank ends. Since these have to be curved to match the tank curvature on most SP tank car classes, wire replacements work best.
The underframe can be much improved by adding brake piping and rigging with brass wire. These parts are very visible on a tank car, and the model benefits greatly from their addition. The Athearn underframe already has brake levers and acceptable brake gear (some modelers may wish to replace the brake gear with better detail parts; the Tichy tank car detail set contains excellent examples). The outboard tank outlets should also be removed, leaving only one at the underframe center.

The Athearn side walkways are smooth, but these wood parts tended to weather heavily, and this is one time in modeling when a heavy wood grain can be correctly simulated. Drag course sandpaper or a razor saw blade along the walk, then sand lightly to tone down the effect. The Athearn placard boards are acceptable, but can be replaced with the much more refined (but more fragile) Tichy parts in the detail set. Fill the slot intended for Athearn’s handbrake stand with styrene or model putty. Finally, drill the B end walkway for a wire brake staff and add a brake wheel. I use Grandt or Tichy brake wheels.
My normal practice is to use Kadee No. 58 (“scale head”) couplers whenever I install new couplers or replace them. The Athearn underframe cover plate is all one piece with coupler box covers, designed for a press-on fit of the covers, but for maintenance access, I prefer separate coupler box covers. I simply drill through the assembled underframe coupler box from the top (where there’s a helpful dimple) and tap for 2-56 screws, then cut the Athearn cover away from the underframe cover plate. The visibility of the wheels on a tank car mean (for me) that it’s worthwhile to install narrower wheels, and I mostly use Reboxx wheel sets for this, in Athearn or other sideframes.
At this point, I would assemble the two tank halves and mount the underframe. Assembly of the tank to the underframe has just one point of importance: the outlet should end up toward the A, not the B, end of the car. This should also place the dome-top safety valves toward the B end. The Athearn handrail supports look all right on a black car, but on a silver or yellow car, I recommend the exquisite Precision Scale parts. A ladder is only needed on one side, and either the Atheam or another ladder can be used.
Here is a list of the parts mentioned in the article:
Tichy tank car detail set, part no. 3007


The painting and lettering which you apply to your model obviously depends on the car being modeled. Cars in revenue service or company fuel service were black with white lettering. Some cars were painted yellow (Colonial Yellow, the same color as SP depots) with black lettering for gasoline service; tank bottom sheets were also yellow on these cars. After 1948, as diesel locomotives arrived in quantity, some of the cars were assigned to diesel fuel service. These were at first all silver with black lettering, but in the late 1940s a new scheme was introduced for diesel fuel cars, black with a wide silver stripe on each end. Both these diesel fuel schemes continued in use throughout the 1950s.
Lettering on SP tank cars differed from most other SP freight cars. Although most SP freight car lettering had 9-inch high reporting marks, 7-inch car numbers, and 3-inch characters for the capacity data at the left edge of the car side, and for end lettering, it is important to recognize that tank cars had 7-inch lettering for both the road name and the car number. There were 1-inch stripes above and below the reporting marks and numbers until 1952.
There have been no commercial decals specifically intended for any of these schemes, and in the past, modelers used various decal sets for most of the lettering, particularly the Champ lettering in set SHS-144 (intended for gondolas). The new tank car lettering set from Jerry Glow (visit http://home.comcast.net/~jerryglow/decals/full.html and scroll down to “Southern Pacific”) solves all these problems and permits lettering several cars from any of four paint schemes, though to do so requires both the set with white lettering, and the set with black lettering. Here are several of the paint schemes (the yellow car is a Pecos River brass version of Class O-50-12; the others are modified Athearn). Visible here are car sides both with and without the dome walkway.

Since these cars often handled commodities which were spilled on the exterior during loading, and were rarely washed or repainted, you can feel free to go heavy with your favorite weathering technique. I like acrylic washes because of the excellent streaking and subtle color variations, which are possible. Your model is now ready for service as a veteran SP tank car.
Tony Thompson

Posted by Tony Thompson at 3:10 PM