Last Thursday through Sunday I was in the Pittsburgh, PA area, to attend the 2013 meeting of RPM-East, a meeting which is held in the Pittsburgh and Philadelphia areas in alternate years. I was there primarily to give two talks and have a chance to see old friends from my own days in Pittsburgh, and I also had the chance to operate on Larry Kline’s large O scale layout. For those interested, RPM-East has a nice website, maintained by Eric Hansmann, at: http://www.hansmanns.org/rpm_east/ .
One embarrassing moment at the event was the revelation by Eric Thur that I had credited him with models at the Cocoa Beach meeting (last January) that actually were not his. If you go to the post about those models (see: http://modelingthesp.blogspot.com/2013/02/prototype-rails-at-cocoa-beach-2013.html ), the first photo in the post does indeed show Eric’s models, but the following photo does not show Eric’s models—they are John Johnson’s. As I have known Johnny Johnson for many years, this is doubly embarrassing for me, and I apologize not only to Johnny but to anyone else who didn’t realize who was the right person to credit for the fine modeling shown. I have edited that post to correct the text, but wanted to also mention it here.
Let me return to Larry Kline’s layout. Here is a photo of his yard and engine house mockup at Western Maryland’s Bowest, PA. In the background is Larry’s mockup of parts of the National Tube Works at McKeesport.

Naturally Bowest usually contains lots of WM hoppers, loaded and empty, as is obvious in this view of part of the yard. That’s WM Baldwin switcher 129 at the left, and part of P&LE’s Dickerson Run yard in the right background.

He also has a staging yard at the other side of the basement from Bowest, called Ridgeley Yard, where mostly steam-powered WM trains are ready for action, heading west to Bowest. That handsome B&O Pacific nearest the turntable was scratchbuilt by Herman Kloppenburg for the late Warren Mayfield, and Larry has upgraded some details as well as adding DCC. Those happen to be NCE throttles lying on the layout, and packets of car cards can be seen ahead of staged trains. 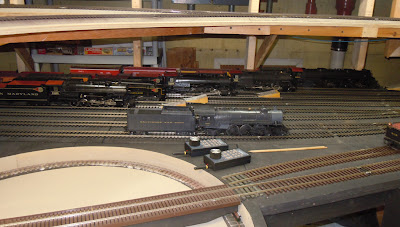 We all took turn running trains between the various interchange yards (Rook Yard of the P&WV, Dickerson Run for the P&LE, and Bowest), and here is a shot of me switching at Bowest. Judging by my level of concentration, I must have been dealing with a very complex set of moves! (This photo was taken by Jim Ruffing, who was among the operators that night.) 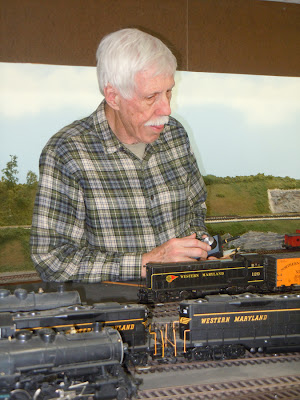 The trip to RPM-East was fun for me. The meeting was interesting and I enjoyed a chance to run trains on Larry’s layout. Thanks again, Larry.
Tony Thompson
Posted by Tony Thompson at 3:27 PM