I have built storage tanks for several of my on-line industries, and need to add more. This post is an introduction to what I have been and am doing. In this first post, I discuss two scratchbuilt storage tanks.
Scratchbuilt tanks are not difficult, and I have done several in the past. Today, with Archer rivets, these are not so challenging. In past years, I have made tanks with simple cores such as plastic pipe or toilet paper rolls, with overlays of 0.005-inch styrene, embossed with rivets. There are also other cylindrical objects which can be similarly converted to storage tanks. For example, I used a white glue bottle for this fuel storage tank. 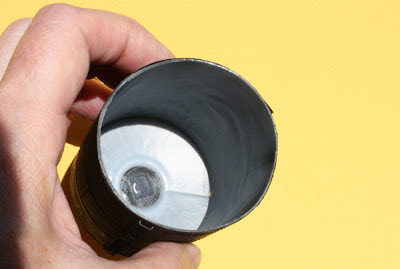 This interior view shows that I used the top half of the bottle, with the spout cut off.
To make this into a storage tank, I just used the styrene overlay method with embossed rivets, and painted it black. Southern Pacific often put their medallion on oil storage tanks, so I did the same, using a freight car decal. 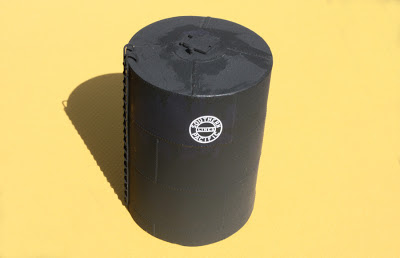 The ladder at left is simply brass ladder stock, folded so the stile is at right angles to the rungs. (You can click on the image to enlarge it.)
On the top, I added an access hatch (modified from a left-over ice hatch from some kit), a vent, and ladder top rails, bent from flat brass wire. I also added some spillage around the top. 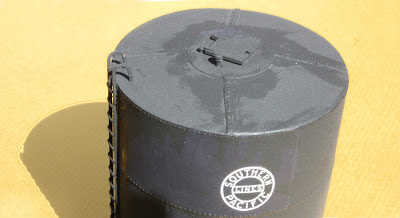 How big is the capacity of this tank? it is 17.5 scale feet in diameter and 23.5 feet high at the outside. The formula for volume of a cylinder is simple, and I have posted how to apply this with tanks previously (the post is available at this link: http://modelingthesp.blogspot.com/2012/10/naperville-tank-car-handout-part-2.html ). In my formula, all dimensions are converted to scale inches, multiplied out in the formula to give cubic inches, and then divided by 225 (converting cubic inches to gallons). This tank would hold 43,400 gallons, equal to the contents of more than three of SP’s standard 12,500-gallon tank cars.
How fast would this gallonage be consumed by steam locomotives? Tenders behind SP steam, in the size range from 7000 to 10,000 gallons of water, had fuel oil capacities of 2900 to 3100 gallons. Looking at some typical oil consumption figures from different parts of the SP, I conclude that a round trip on my (mythical) SP branch line would use less than half an oil bunker. Of course the bunker would be filled before each run, but probably in the amount of about 1000 gallons. So I will only need to deliver company fuel oil to this tank about every other week.
Another scratchbuilt tank I made was kind of a response to a skeptic. I had idly remarked that toilet paper rolls were not a bad size for storage tanks, and a listener said that since those rolls were pretty flexible, he doubted I could make a tank out of one. So of course I went ahead and did it.
I decided to make a horizontal tank. First, I made supports from quarter-inch balsa wood sheet, and painted them concrete (a little too gray a color, though). The curved parts were made, of course, to have the diameter of the toilet paper roll. 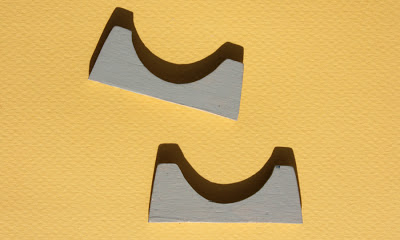 Then the tank body received the same styrene overlay with scriber-impressed rivets, both around the tank and on the ends. They aren’t great rivets, but as long as they are not at the front edge of the layout, they do the job. 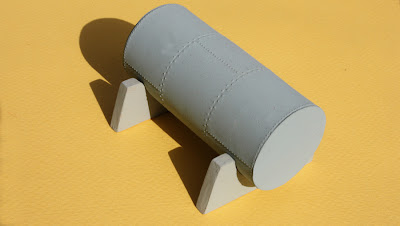 The tank is dark gray for the time being, and will probably be repainted to match the other tanks of whichever one of my bulk oil dealers eventually receives this tank.
These are pretty simple tanks, but they illustrate what can be done, even without using Archer rivets. In a future post, I will describe how I have used Archer rivets for making tanks. Of course there are also lots of kits for all kinds of tanks, and I will talk about those in the next post on this topic.
Tony Thompson
Posted by Tony Thompson at 11:11 AM

Email ThisBlogThis!Share to TwitterShare to FacebookShare to Pinterest
Labels: Structures