By “one-piece waybill,” I mean the model waybill which has no car card or car sleeve, just a single document, like the prototype had (and, in electronic form, still has). This is the style of waybill I created for the freight cars on Otis McGee’s layout, as I described in prior posts: first, an introduction (at: http://modelingthesp.blogspot.com/2011/07/waybills-9.html ), followed by some development of the ideas behind this type of waybill system (it’s at: http://modelingthesp.blogspot.com/2011/08/waybills-11.html ), and finally I completed the basic description by presenting a few additional refinements and details (here: http://modelingthesp.blogspot.com/2011/09/waybills-12.html ).
This idea, of course, is being used all across the country and is certainly not just mine. The recent book on layout operation by Tony Koester, Realistic Model Railroad Operation (Second Edition, Kalmbach, 2013) covers a variety of approaches, including the ones I have discussed in this blog. I described and recommended the book in a blog post when it was fairly new (you can read it at: http://modelingthesp.blogspot.com/2014/03/tony-koesters-recent-operations-book.html ).
In the present post, I want to mention experiments I have been making with my own waybill system, trying versions of the one-piece waybill. For cars which run freely (many box cars and gondolas), this is limiting because I would like to be able to marry a wide range of cargoes suitable for such cars, with the car available at the time on the layout. But there are also cars with very limited (or no) variety in their assignments, such as tank cars traveling back and forth between a refinery and bulk oil dealers.
To illustrate, here is a Union Oil Company tank car, UOCX 8008, which on my layout pretty much cycles to and from the Union Oil dealership at Ballard. The car is shown outward bound at Shumala, the main line junction, in an empty condition (note the Empty placard on this side of the car), and the corresponding waybill is the one on the left. Also in the car sleeve (which has no label) would be the paired waybill for when the car is loaded; here it is displayed alongside the sleeve. In this case, the cargo shown is kerosene. (You can click to enlarge the image.) 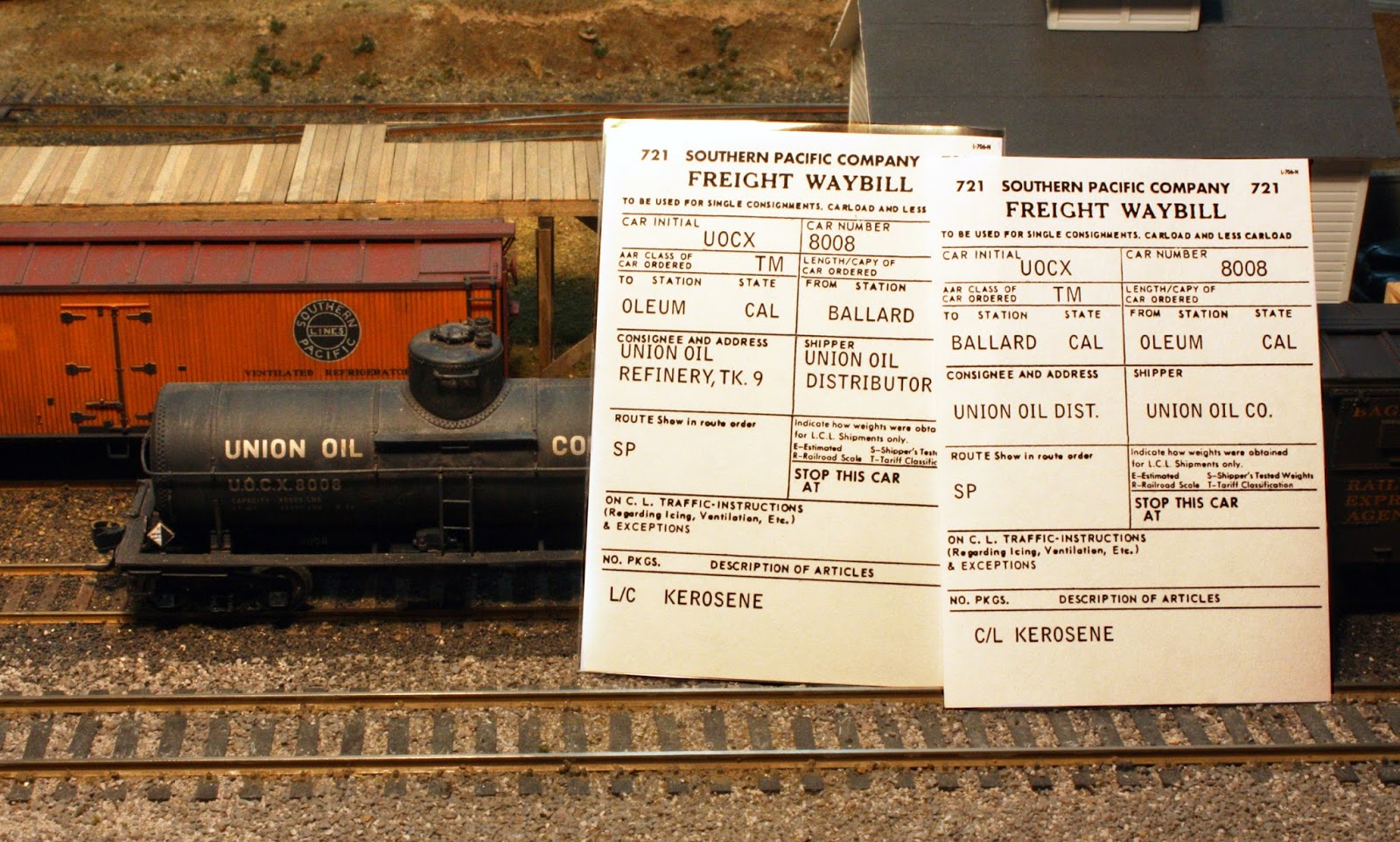 As often pointed out, the empty car returns on a regular freight waybill to help emphasize the identity of the previous cargo, for safety reasons.
If I wanted to do so, I could add another pair of bills for this car, with a different cargo such as heating oil. The sleeves readily would accept another pair of waybills, especially if they are printed on paper instead of cardstock.
Here is another example, paper being shipped from Canada to a printer on my layout. I received advice from a paper purchaser about how this would be handled, including the customs point, though I have not researched these details for 1953. 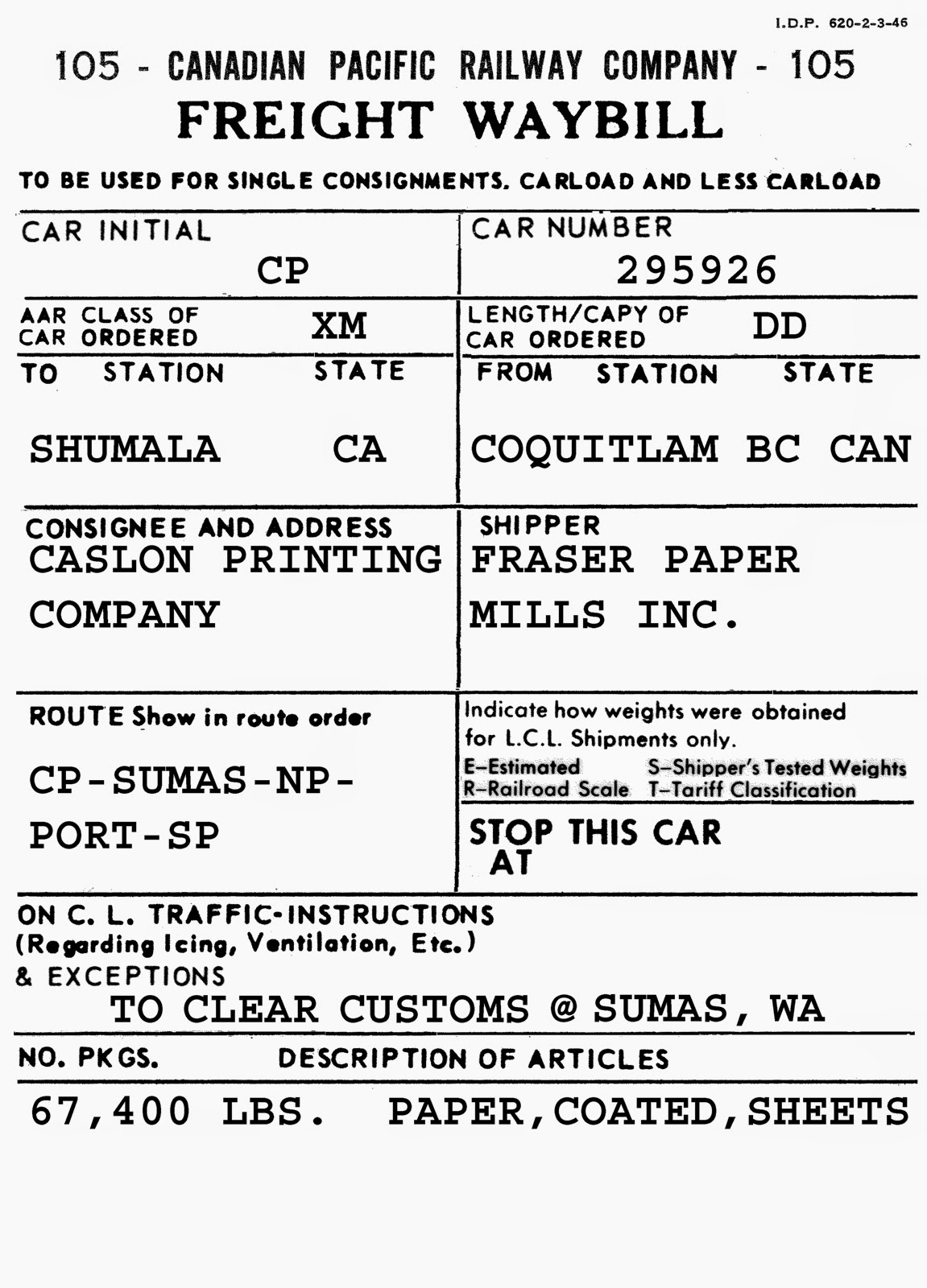 The car delivery at the printer is shown below. I have been told that one use of these double-door Canadian Pacific cars was in fact for paper shipping. (The car is from a Sylvan Scale Models kit.) 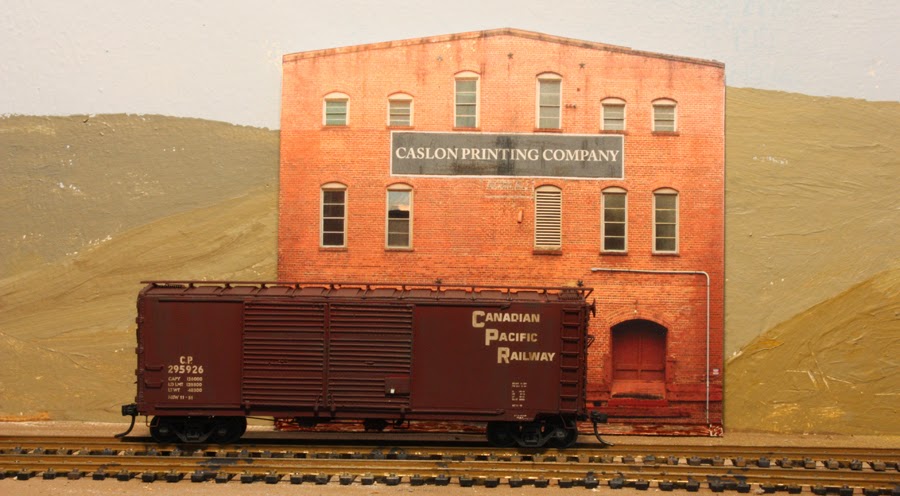 This kind of waybill is interesting in that it captures the limited options for some model freight cars on the layout. It also has the advantage that it places the reporting marks and number of the car at the top of the waybill, which is the prototype location. It has the minor disadvantage of being a different format than my other waybills which use car sleeves, but I will have to experiment and see whether that constitutes a real or an apparent problem.
Tony Thompson
Posted by Tony Thompson at 4:44 PM