It has been some time since I have commented on progress with the engine terminal at Shumala. It was described in 2011 as it then was, in a post which also described plans for it (see it at: http://modelingthesp.blogspot.com/2011/04/modeling-engine-terminal.html ). Among those plans was to build the Banta Modelworks kit (which represents SP’s roundhouse at Port Costa, California), and I have now completed that structure. I’m very pleased with how it turned out. For more on my build of the kit, you can work backward from the concluding post in a series (it can be found at: http://modelingthesp.blogspot.com/2014/02/a-roundhouse-for-shumala-part-5.html ). You can see it in the background of the photo below.
I have also added a long-planned caboose service building alongside the caboose track, using the body from a Westerfield kit. It too is at the engine terminal (a project description is at: http://modelingthesp.blogspot.com/2014/03/a-caboose-service-building.html ). Another principal feature of the terminal is the 88-foot turntable, built from a Diamond Scale kit, which has worked well in operating this terminal.
But recently I have received two different emails asking specific questions about the Shumala engine terminal details, so thought I would expand a little on the foregoing posts. I mentioned in the first of the prior posts cited above, that both a water storage tank, and a fuel tank, needed to be in place as sources for the fuel and water columns at the terminal. Those can be seen at the left of the photo below, with the 65,000-gallon water tank (Overland Models brass) alongside the roundhouse, The oil tank further right is scratchbuilt. 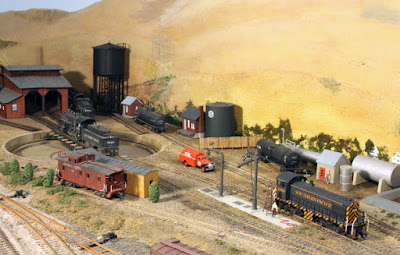 On the turntable is 2-8-0 SP 2829 (Sunset brass, Max Gray tender), and on the garden track next to the roundhouse is 4-6-0 SP 2344 (Precision Scale). In the foreground is Alco S-2 SP 1389 (Atlas), just forward of the fuel and water columns.
Note also in this photo the red Associated Oil Company delivery truck near photo center, which has just fueled the diesel — the SP has not build diesel fueling facilities here yet. In the background at right is part of the Associated Oil dealership here, described in an article in the March 2014 Model Railroad Hobbyist (downloadable for free any time from their site, www.mrhmag.com ) and also mentioned in a prior post (that one is at: http://modelingthesp.blogspot.com/2014/03/associated-oil-co-modeling-oil-dealer.html ).
At lower left is a single caboose on the caboose track, where there are often two; this suggests that the Santa Rosalia local is still out on the road, using that second caboose. And at the upper left, just in front of the 65,000-gallon water tank, can be seen an SP tank car delivering Bunker C locomotive fuel for the steam power.
This terminal still lacks a sand house, and I have a project started to build one from scratch. More about that when it happens.
Tony Thompson
Posted by Tony Thompson at 10:16 AM