My latest column in MRH

As part of the ongoing series of columns with the series title “Getting Real,” by several columnists including me, in the on-line magazine Model Railroad Hobbyist, I have a contribution in the current issue for August 2017. Like all issues of MRH, you can read it on line or download it, for free, at any time at their website, www.mrhmag.com .
This column is about engine-terminal details. Readers of this blog will realize I have been writing multiple posts on parts of this topic, for example on modeling of blue flags (see my concluding post in a short series at this link: http://modelingthesp.blogspot.com/2017/04/blue-flags-part-2-modeling.html ). I also wrote a longer series of posts about the  excellent kit produced by Banta Modelworks for the SP roundhouse at Port Costa, California (see for example: http://modelingthesp.blogspot.com/2014/02/a-roundhouse-for-shumala-part-5.html ).
Perhaps a more interesting part of my MRH article was the coverage of work carts used by workmen at SP engine terminals. I included a whole bunch of prototype photos, and for flavor here is still another such photo, from the John W. Barriger National Railroad Library photo collection at the St. Louis Mercantile Library, image SP 1168a. It was taken at an SP roundhouse, which looks very much like the one at Taylor Yard in Los Angeles. 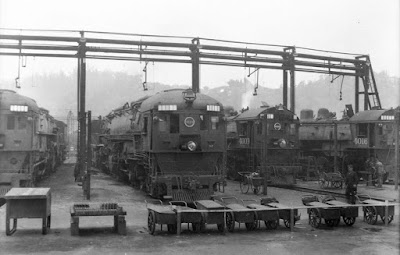 Note all the work carts lined up in the foreground, each slightly different from the next, with flat or rounded tops, different hand rails, some with hoses, and different in length. Here is a closer view of those same carts in the right foreground of the photo above.

My blog posts about how I built a variety of carts are available via the concluding post in that series, which can be found at the following link: http://modelingthesp.blogspot.com/2017/04/building-work-carts.html . I am in the process of building more of these carts.
I also enjoyed developing some of the other details described in the column. Some of these, as I mentioned above, have been covered in my blog posts (links are supplied in the article, to connect to those posts). Some other details, such as ladders, have not been addressed in the blog.
But probably my favorite project, one I had been meaning to do for some time, was the fire equipment cabinet. I knew that SP attached these cabinets to many structures, and I had seen something similar in model form on Bill Darnaby’s Maumee Route layout. But preparation of the MRH column drove me to finally dig out some SP photos of this equipment, and of course build a model. I enjoyed building it, and I will probably need to do a second one for the forthcoming sand house at Shumala.
Once again, the deadline for another column in the MRH series led me to pull together several ongoing and planned projects, and it was fun to get all those details completed. Once again, if you haven’t seen my column or even the August issue yet, I recommend it.
Tony Thompson
Posted by Tony Thompson at 7:34 AM