I have always liked tank cars lettered for Celanese Corporation, and want to have a small fleet of them. The largest production category for Celanese was synthetic fibers and yarn, but they also produced chemicals such as various acetyl intermediates, including acetic acid and vinyl acetate, along with acetone, acetaldehyde, formaldehyde, and methanol. Many of these products would be suitable inbound loads to Pacific Chemical Repackaging on my layout. (For more about that industry, you may wish to read my previous posts about it, such as: http://modelingthesp.blogspot.com/2017/03/chemical-repackaging-part-3.html .)
At the time I model, the largest plant was located at Bishop, Texas, southwest of Corpus Christi and served by the St. Louis, Brownsville & Mexico subsidiary of the Missouri Pacific. Accordingly, I use inbound waybills from the StLB&M. Several of the MoPac subsidiaries had their own AAR code numbers and separate waybills, including StLB&M.
There have been a number of commercial models, at least in HO scale, of Celanese cars. Some are reasonable versions, and I have a couple myself. But what I want to talk about in this post is the challenge of doing the paint and lettering for a typical Celanese car that is different from the commercial versions.

Celanese tank cars pose a challenge as to paint schemes. Most cars were green, but color photographs show a range from dark green, through a kind of pea-soup green, to light green. Some cars had dome stripes, either cream, dark green (darker than body color), or black; other cars had no dome stripe. The company name was spelled out in a stylized script, in colors ranging from black or brown, to light or dark shades of red (sometimes on a white background, sometimes right on the green), and of widely varying size. Here are examples of just two of those variations, in a photo from the Richard Hendrickson collection, obviously taken at SP’s Taylor Yard in Los Angeles, but I don’t know date or photographer. 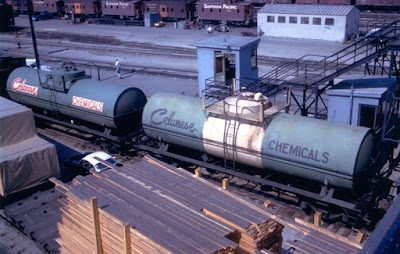 Here is another example, in this case an 8000-gallon insulated car, GATX 66287, with a dark dome stripe, possibly dark green or faded black. This photo also is from the Richard Hendrickson collection, now at the California State Railroad Museum. (You can click to enlarge.)

One might conclude that almost any paint scheme with some combination of these decorative elements would likely be correct for some car. And as can be inferred from these two photos, the ranges of colors seen in prototype photos may well represent simple fading in service, as well as possible variations in original paint color. In other words, the car at the right in the color photo above may have originally been the same darker green as the car at left.
I should hasten to say that I already have a couple of Celanese tank cars. One is a Precision Scale brass car, the upgrading of which I described in a post  few years ago (see it at: http://modelingthesp.blogspot.com/2012/12/small-modeling-project-brass-tank-car.html ). Here is a repeat of the model photo from that post. The color chosen by Precision Scale is certainly gaudy but does fall into the range seen in prototype photos.

There was also a Celanese car produced as part of the Tangent Scale Models series of three-compartment General American tank cars. Its paint scheme was based on this prototype photo: 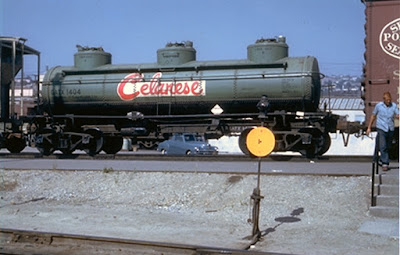 The model paint scheme and car number, GATX 1404, accurately mirrored the above photo. Here is a view of my model, with weathering added to the ready-to-run model. 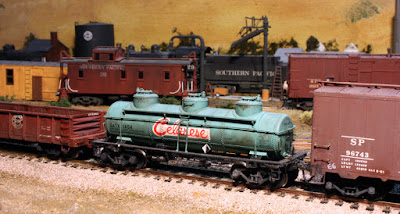 Since I have the Tangent model with the red lettering on a white rectangle, and the brass one with the lettering on an all-green car. I decided to aim for one of the cars with a cream dome stripe. It’s a striking scheme and would make a contrast to my other Celanese model tank cars. I haven’t decided yet as to the car type I want to model. It might be possible to start with either a 10,00-gallon car, such as an InterMountain tank car, or perhaps the old insulated Athearn tank car, always labeled by Athearn as a “chemical” tank car, though the term is meaningless.
[Incidentally, if I use an Athearn insulated car as a starting point, the project will become part of my ongoing series on how to “rescue” that model from its shortcomings. If that topic is of interest, you may wish to read some of the prior posts on it, such as: http://modelingthesp.blogspot.com/2010/12/upgrading-old-models-2.html, which is about fixing the enormous valve bonnet on the Athearn car, or one about a project to use the Athearn body for models of other than high-pressure (or ICC 105) cars, which is at: http://modelingthesp.blogspot.com/2015/12/modeling-insulated-tank-car.html .]
I will take up the modeling part of this story in a future post or posts, depending on the extent of exactly what I decide to do to create the model. Like any such story, use of prototype information is essential, and I will explore some of that further in the following post.
Tony Thompson
Posted by Tony Thompson at 8:37 AM