The Southern Pacific Historical and Technical Society now owns the dies for the former Red Caboose SP flat car, classes F-70-6 and F-70-7. Future releases of these flat cars will come from the Society, not from Red Caboose. The styrene kits for the early SP homemade bulkheads were also created for the Society, and have been available for some time from the Society. Now available are ready-to-run cars with those bulkheads installed. To purchase either the kits or the complete car, go to http://www.sphts.org/index.php, and use the navigation bar to visit the Company Store.
In September 1949, SP began to install these bulkheads on its own flat cars of Class F-70-6. They were converted specifically to carry plasterboard, which is why the bulkheads are not very tall: loading to the top of these bulkheads would be a 70-ton load of plasterboard. There were 10 or 12 cars converted per month until the spring of 1950. Some additional cars were converted in subsequent years, likely as plasterboard service needs dictated.
The Society’s bulkhead kit, and this RTR car, both make an outstanding representation of the somewhat complex end area of these cars. Here is a photo of a car I’ve repainted and weathered, shown being switched by a Baldwin AS-616. 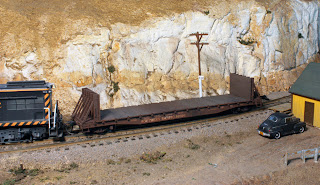 The repainting I did is only of the deck and internal wood surfaces of the bulkheads. The model comes with those areas in body color, but in fact SP did not paint those parts of the car (they did paint the outer surface of the entire bulkhead). All this wood was pressure-treated but not with creosote, thus SP flat car decks were essentially wood color in appearance.
The weathering method I use for unpainted wood surfaces like these was described in an earlier post (see http://modelingthesp.blogspot.com/2011/05/weathering-flat-car-decks.html) and I won’t repeat that information here. Modelers need to darken  these wood surfaces with a grayish brown color, to a degree appropriate for the number of years the car would have been in service by the time they are modeling.
The model is also a rather brown color, a factory error, but weathering it with a Burnt Sienna wash helps make it a bit more red. Burnt Sienna is a “terra cotta” color and as a wash atop the brown, does move the color in the right direction while also softening the stark white of new lettering.
This is a wonderful addition to the possibilities among SP freight cars, and we owe a debt of thanks to the SP Society and its president, Paul Lyons, for making this possible.
Tony Thompson
Posted by Tony Thompson at 1:14 PM