In my previous post, I showed my initial mockup for the Guadalupe Fruit Company packing house building at Ballard (you can view it at this link: http://modelingthesp.blogspot.com/2013/09/building-guadalupe-fruit-company.html ). I also mentioned some of my concerns about how the mockup looked: whether the platform was too large relative to the building, and whether the platform needed a full-length roof, or any roof at all. In this post, I describe revisions to the mockup.
My first step was to try enlarging the building, keeping it two stories throughout, and shortening the platform by the same amount as the building was lengthened. This was done with some scrap cardboard. Here is how it looked (depot in background), ignoring for the moment the issue of whether and how much to roof the platform.

The two reefers are spotted here to show that two cars could still be loaded at the shorter platform.
This immediately convinced me that I did not want the building this big. It is rather prominent in the layout foreground, sort of dwarfs the one-story depot behind it, and is probably too big in proportion to the imagined business of a seasonal fruit packer.
My next idea was to revert to the original, smaller main building, and use the shorter platform (shown above) with it. This was an easy change, as I just had to un-tape the added pieces of the larger building, and reassemble it in original form. In this view, I tried adding the platform roof, but don’t think I would actually build this tapered roof structure (which would not be entirely fun for a 1:1-scale carpenter either). 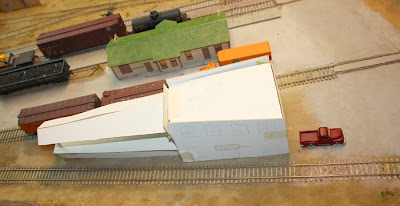 The structure here is also moved somewhat to the left, away from Bromela Road at right, which would permit a truck unloading dock at that side of the building. Here is a side view, with the two reefers behind the platform.

Another possibility surfaced in a search of back issues of model magazines. In the July 1987 issue of Model Railroader (pages 79–81), Eugene S. Martin had an article about the H.M. Young fruit-packing shed in Lodi, California, which was a single-story structure. The building was arranged to receive harvested table grapes on one side, and load refrigerator cars on the other side, and the article even included scale drawings of the prototype. Here is Eugene Martin’s photo of the structure in Lodi in 1971, used with permission from Model Railroader.

This structure almost goes too far the other way, being a genuinely small building (60 percent of the structure’s length is the open platform) and also was set up for loading lugs of grapes right from field trucks into refrigerator cars, with no “packing house” intervention. That is something that can be done with table grapes, but usually not for stone fruit, the intended product of the packing house I am going to build.
My interim conclusion is that I do want to build the two-story packing house building as I originally mocked it up, but I like the platform design from the Lodi shed, and can use the Model Railroader drawings for dimensions. My next step is to begin construction, and I will address that in my next post on this topic.
Tony Thompson
Posted by Tony Thompson at 10:20 AM