The annual meeting known as Naperville (even though this year it was a few hundred yards outside the town boundary of Naperville, Illinois, in the neighboring town of Lisle) was a fine event as always. Held at the Wyndham Hotel on October 17–19 this year, it gathered more than 320 attendees from every corner of the U.S. and Canada, justifying its nickname as “The Freight Car National.” Among my previous posts commenting on Naperville is one which mentions the change in management from Martin and Patricia Lofton of Sunshine Models, to Joe D’Elia, proprietor of A-Line and other products (Here’s a link: http://modelingthesp.blogspot.com/2011/10/meeting-highlights-lisle.html ).
This year’s meeting, as always, was marked by excellent model displays (perhaps not quite as numerous as some years), fine portable layouts, and a very fine vendor’s room. Talks by a wide range of clinicians are a central part of this meet, and there were a number of fine ones this year. And for some of us, the visit to the Chicago area is an opportunity to operate on some of the fine layouts within range of the hotel.
The four rooms used for talks this year were a little small, and any popular topic would find not only all seats full and standees around the rear of the room, but a few folks sitting on the floor in front of the rows of chairs. Nevertheless, I found the program good, and I heard the same from a number of other attendees.
Highlights for me personally were Perry Sugarman’s detailed presentation on “The Role of the Station Agent,” Jim Dick’s clinic entitled “Nelson-Gilbert: Getting Closer to the Railhead,” and John Brown’s talk on “Auto Frame Loads.” There were also good talks by Jim Ruffing on SP&S freight cars, by Bill Welch on pattern-making for resin casting, and not least, the after-dinner talk (the Friends of the Freight Car Dinner) about ExactRail products by Blaine Hadfield, head of product development at ExactRail. With all that in mind, you can appreciate this expectant audience in one of the clinic rooms, right before kickoff. 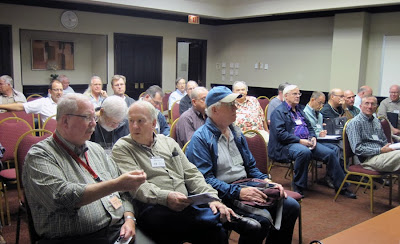 At left in the front row is Mont Switzer, with Chet French beside him, but I won’t go through the rest of the audience, naming names. Still, the many familiar faces is a reminder of a great value of this meeting — catching up with friends who live far away.
Here’s an overall view of one table in the model display room, but a single photo naturally can’t begin to do justice to the array of fine modeling. 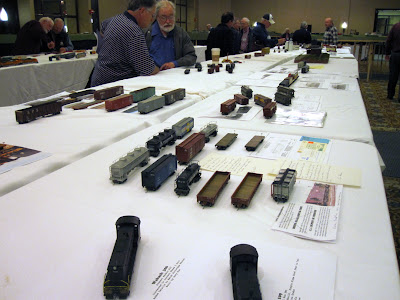 The gray-bearded fellow across the table is John Spencer.
The vendor room likewise contained too much to show in a single view, but here is one part of the room, with Sharon Camerlengo visible under the Funaro & Camerlengo banner. Assembled samples of F&C kits are at right. 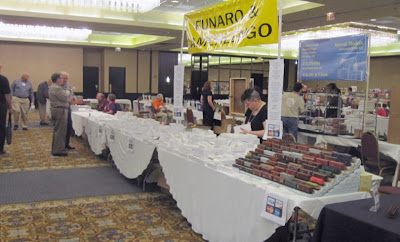 Probably the most active table among the vendors was Tangent Scale Models, with proprietor David Lehlbach seen here in the orange shirt. 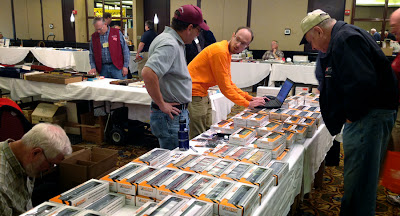 The reason was simple: Tangent released a marvelous tank car model at the meeting, a General American 6,000-gallon car with three compartments, and they sold like hot cakes. For more on that, I can only defer to their web site, where you can see much more of the model than I could show here. Visit them at: http://tangentscalemodels.com/ .
Lastly, one layout operating opportunity I had was at Bob Hanmer’s fine re-creation of the GN Mesabi Division, and the DM&IR, in Minnesota. Here is fellow operator Andy Sperandeo completing switching in the yard at Grand Rapids. I was yardmaster at Gunn, out of sight just to the right of this view. 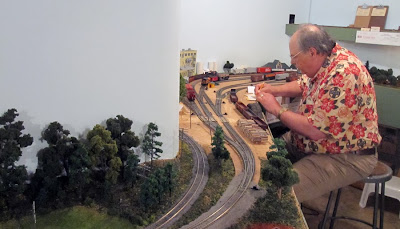 I especially liked Bob’s well-thought-out graphics at each switching location. Here is the graphic at Gunn (click to enlarge), placed on the box which holds waybills. Bob’s waybills are the Steve Karas design, 4.25 x 5.5 inches in size (a quarter-sheet of paper), and are the single-use type, no car cards. This is my kind of car distribution! 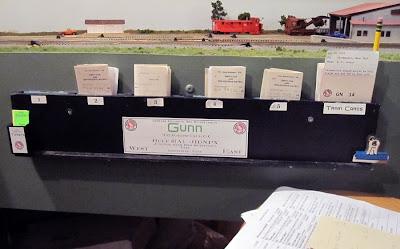 All in all, another fine Naperville (well, yeah, Lisle) meeting. Many of us are already looking forward to next year.
Tony Thompson
Posted by Tony Thompson at 6:04 PM