Stauffer Chemical in the Bay Area

I have long been interested in the Stauffer Chemical Company, in part because they owned a fleet of tank cars to transport various chemicals, and also because they had West Coast operations, and even identified each location with separate reporting marks for assigned cars. In the 1953 Official Railroad Equipment Register, there were six different reporting marks for Stauffer component companies: SCHX, for the Eastern Branch (66 cars); STLX for the Southern California Branch (49 cars); STAX for the Northern California Branch (45 cars); STIX for the branch in Indiana (14 cars); STNX for the branch headquartered in New York (7 cars); and STHX for the Henderson, Nevada branch (41 cars). That’s a total of 222 cars
A few years ago I corresponded with Decker McAllister Jr., a Professional Engineer who had worked for them, and he was kind enough to send me an account of their inbound and outbound traffic. This kind of information, of course is absolute gold for those of us interested in traffic and waybills. Below is his account, sent to me in writing.
“I used to work at Stauffer (the boric acid plant in San Francisco, circa 1950) and at Stege (Richmond, with five plants). I have been kicking myself that I didn't get photographs or draw plans. For the most part, these were multi-story, steel-reinforced brick buildings, built right out to the clearance limits of adjoining track. They had been built around the turn of the century.  Many walls curved to follow the track shape. These buildings had character — they were ‘hung’ with Redler conveyoers, pneumatic conveyors, piping, Cyclone dust collectors, loading platforms, etc.
“The boric acid plant received borax ore in covered hoppers and sulfuric acid in tank cars (STAX). Boric acid was loaded out in 100-pound sacks and in barrels into box cars (2-3 cars per day). Soda ash (Na2SO4) was loaded out in 100-pound sacks. (I worked most jobs, including freight car loading.)
“The Stege works included a bunch of activities. One plant was the only carbon disulfide (CS2) plant west of the Mississippi (plant was called Wheeler, Reynolds & Stauffer, WR&S). Charcoal was received in box cars (from Tennessee). Liquid sulfur was received in insulated tank cars equipped with steam heating coils. Also, WR&S owned 4 tank cars (WRSX) and also shipped CS2 in drums in box cars. (The CS2 was used in mining operations to make xanthate flotation agents, and in agriculture [strawberries] to disinfect fields on a yearly basis.) Storage tanks were located under water in big ‘swimming pools.’ The CS2 was ‘water pumped’ since it was toxic, flammable, and heavier than water.
“There were two sulfuric acid plants at Stege. One, the wet process, burned pyrites (delivered in gondolas) with Herreschoff roasters. Cinder was shipped out in the scroungiest, most beat-up hoppers and gondolas the railroad could find. The sulfuric acid was shipped out by drum or carboys in box cars, and in tank cars. The other plant, a Leonard-Monsanto (vanadium catalyst) plant, burned elemental sulfur that was received by box car (frozen solid, from Canada), truck and tank car.
“The superphosphate fertilizer plant received phosphate ore from the San Francisco Chemical Company at Garfield, Utah, in covered hoppers. The fertilizer was shipped out in 100-pound bags by truck and box car. Cars were switched and spotted at night. We also received those special flat cars with the 1-ton cylindrical containers of chlorine. I dare say that we had 20 to 30 cars per day, all types.
“Also produced at Stege were alum, ferric sulfate, vapam (metam sodium, a soil fumigant), and insecticides.”
Over the years, a variety of Stauffer tank cars have been photographed, including SCHX cars with home points such as Roanoke, VA and Chester, PA. Shown below is an STLX acid car from the Bob’s Photo collection (used with permission), photographed at Los Angeles in February 1954. 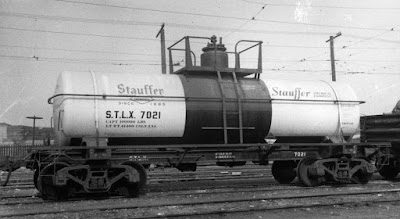 The car is gray with a black band and underframe. The lettering scheme you see here, it must be said, is one that had many variations, and the various elements seen here appeared in a range of combinations, sometimes with white lettering on black, as is evident in different images. Very noteworthy in this photo is the stenciling on the center sill, which reads “built 11-29” and under that, “rebuilt 1-54.” (You can click on the photo to enlarge, if you wish.) Since the underframe is obviously riveted. this “rebuild” almost certainly involved a new, welded tank on an old underframe, a very common procedure with tank cars.
A paint scheme of this general kind was used by Broadway Limited on their nice ICC 105A chlorine tank cars, recently released and still available many places. This represents a car leased by Stauffer from Shippers Car Line. (Photos demonstrate that Stauffer also leased cars from General American.)

This  model is “out of the box” and needs weathering, placards, route cards, chalk marks, etc.
In a post a couple of years ago, I also showed Tangent’s acid tank car model, with decoration for Stauffer (that post can be found at this link: http://modelingthesp.blogspot.com/2014/11/a-terrific-new-tank-car-model.html ). And to round out the story, even earlier I built a scratchbuilt tank to go on a modified Tichy underframe; that project was described in Railroad Model Craftsman, in the issue for January 2012, pages 61–66. Here is that model:

Having Decker McAllister’s recollections enables me to understand some of Stauffer’s traffic and accordingly, to make a few waybills for my own layout, using the various Stauffer tank cars I have. I wish I had this kind of information for more industries!
Tony Thompson

Posted by Tony Thompson at 3:57 AM