The latest HO scale freight car from Rapido Trains is a distinctive (and numerous) box car built by the Northern Pacific. This particular group of cars has become well known to freight car modelers because of its size and, especially, its longevity. I will say more about the prototype below, but this Ready to Run or RTR model represents a great increase in availability. Sunshine Models offered this car in resin kit form around 20 years ago, but now there is a readily accessible version for anyone.
The Northern Pacific received no allocations of freight cars from the United States Railroad Administration (USRA) during World War I, but NP, like most railroads, was nevertheless greatly influenced by the USRA designs. In the middle 1920s, they purchased over 4000 box cars that followed essentially the USRA 40-ton box car design, though NP’s distinctive radial roof was applied (or, as NP called it, a “circular” roof). The USRA box car underframe was, in hindsight, rather over-designed, and accordingly had a long life. That’s one reason the NP cars lasted so long.
The base group of these NP cars were numbered from 10000 to 13999 (the follow-on cars in the 14000 series were dimensionally identical). As an example of their remarkable longevity, 3809 of the original 4000 cars wee in service in January 1953, about 30 years after construction. Their wood-sheathed sides were unexceptional, as the image below demonstrates (from Bob’s Photo):

The paint scheme of this photo is that introduced in 1941, with the 36-inch diameter emblem.
Like the USRA cars, the NP cars also had corrugated ends. The view below shows the end well, along with the roof contour (photo by M. Nierdieck, Richard Hendrickson collection). This car, NP 11237,  was photographed in 1957, but still has the 1941 paint scheme. 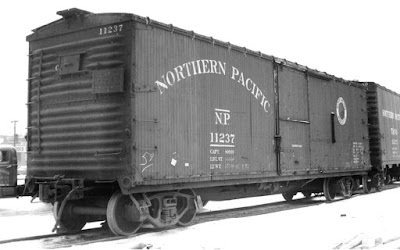 The new Rapido model reproduces this prototype extremely well. I show below the car I obtained, with the 1941 paint scheme and AB brakes (suitable for my 1953 modeling year). It also has the lever-type hand brake which NP originally installed on these cars.

The car is fairly glossy as received, so a coat of flat was my first step, prior to weathering with my usual technique involving washes of acrylic tube paints (for more on that, see the Reference Pages linked at the top right of this post). I also added my usual reweigh and repack stencils, along with addition of route cards and chalk marks, and also dirtying the overly pale rust color of the couplers. Here is the left side of the completed car.

This is a very nicely done freight car model, and I commend Rapido for the quality. I will have it at work on my layout in the next operating session!
Tony Thompson
Posted by Tony Thompson at 2:49 AM