I have been gradually working through my several Southern Pacific box cars of pre-war built dates, and replacing their original Red Caboose or InterMountain wood running boards with etched metal “steel” running boards. The first box cars that SP purchased, according to the 1937 AAR standard box car design, were from classes B-50-18 and -19, and these were delivered with wood running boards.
But by the beginning of World War II, three more classes of box cars had been delivered, totalling more than 5200 cars, and all had steel running boards, as well as W-corner-post ends. Bodies with these ends have been offered by Red Caboose and InterMountain, but the steel running boards have been ignored, and all these car classes have been produced with wood running boards.
As my layout centers on SP, I wanted to correct these models. I will just show a single example of how I do this. I have several sources of etched-metal running boards, including some nice ones offered by Overland Models years ago, but the versatility and general excellence of the Plano Model Products boards is very convenient. Shown below is the kind of kit you get, with the longitudinal running board, and both lateral boards in a single fret, and a frame for the laterals (below the laterals’ fret in the photo below), This is a kit for an Apex running board. 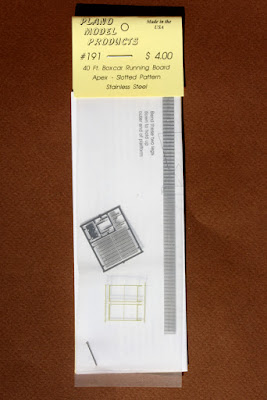 You can see all these parts here, though the full length of the longitudinal board extends under the label at the top.
My first step after removing the old, incorrect wood running board, is to attach the longitudinal board with canopy cement. This is the right cement for this job, because it remains flexible and will not break when temperature changes expand or contract the metal running board; the contrary is true of CA or other brittle adhesives. (For some further details about canopy glue, you might wish to read my blog post on the topic, which can be found at: https://modelingthesp.blogspot.com/2013/05/a-few-words-in-praise-of-canopy-glue.html .)

I have represented a little paint failure on this roof, using a light gray paint at sharp edges of the roof panels, which is where paint over a galvanized surface often fails.
Note that this running board on the model is a U.S. Gypsum board, also from a Plano kit. The car models SP 82940, Class B-50-21, and out of 2000 total cars, the 500 cars of this class built by Bethlehem (SP 82490–82949) all had Gypsum running boards. (This information is from my Volume 4 on box cars, in the series Southern Pacific Freight Cars, revised edition, Signature Press, 2014.)
Next I attach the frames for the laterals to the back of the lateral boards, using CA. Shown below are the undersides of the laterals with frames attached. All application of CA is on the underside only.

The next step is to attach the corner grab irons to the laterals. I used Tichy corner grabs for this, and added eyebolts from my parts box. The way I arrange a constant height of the grab iron above the lateral is to clamp a piece of styrene between the grab and the lateral (using a normally-closed tweezer), then apply CA underneath to hold the wire ends of the grab and eyebolt. The clamped arrangement is shown below. In the photo below, I  moved the tweezer slightly so you can see the grab iron. 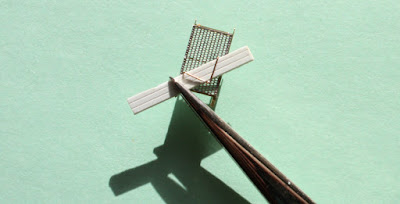 With this completed, I cut off the excess length of the grab iron on the underside of the lateral, then bent the frame tabs to accommodate the shape of my model box car roof. I attached both laterals with CA. This completes the modeling work for this job. 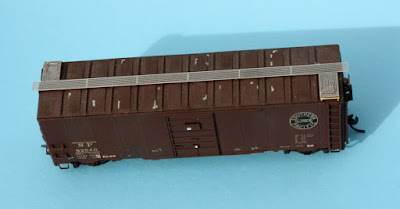 The rest is finishing: painting the running board with boxcar red, then weathering lightly to match the roof. But that is straightforward and not an essential part of this small project. I have more of these Red Caboose box cars to “correct” by replacing their wood running boards, so this is kind of a pilot project for additional work.
Tony Thompson
Posted by Tony Thompson at 11:58 AM