I have commented in a number of previous posts about paint schemes for Pacific Fruit Express refrigerator cars, especially about model manufacturers’ implementation of some schemes. Any of those posts can be found easily using a search term like “PFE paint scheme” in the search box at right. Of particular interest may be a predecessor of today’s post, which can be found at: https://modelingthesp.blogspot.com/2016/05/replacing-bad-decals.html .
Let me begin by reviewing what is very well documented and should be well known. From the earliest days of PFE in 1906, car ends were painted boxcar red (which I’ll call BCR). Roofs then were an outside wood-sheathed design, and were BCR also. When metal-sheathed roofs were first applied, they were painted black, but around 1936 or so, they became BCR again. Roof and ends then remained BCR for PFE’s ice cars until 1962, when PFE decided that all its cars, ice or mechanical refrigeration, would have the same paint scheme, black ends and silver roofs.
Much of this information is contained, in somewhat abbreviated form, in the PFE book (Pacific Fruit Express, 2nd edition, Thompson, Church and Jones, Signature Press, 2000), but it is much more completely presented in Dick Harley’s excellent compilation, contained in the SP Historical & Technical Society book, Southern Pacific Freight Car Painting and Lettering Guide (SPH&TS, Upland, CA, 2016). The book also contains a pretty complete guide for SP cars that I wrote.
So what’s the problem? One issue is that exceptions to the standard paint did occur, especially in the latter part of the 1950s. Ice refrigerator cars were occasionally photographed with black ends, though they should have been BCR, probably having happened when the shops were painting mechanical refrigerators (which always had black ends) and just didn’t bother to change colors when doing the ends on an ice car. There is also at least one photo of an ice car with the lettering and railroad emblems of pre-1960 PFE, but with black ends and silver roof, again, likely a shop shortcut.
Should we model these rarities? That’s a personal call, but relevant, because nowadays our good friends at InterMountain Models release some ready-to-run cars with black ends, or in the latest release of Class R-40-25 cars, a car with black ends, silver roof, and pre-1960 lettering, as I just described. Now I know how modelers often fall in love with weird or one-of-a-kind paint schemes, so I would guess that decorating models that way does produce sales, but the more careful modeler may wish to avoid such oddball paint and lettering.
As it happens, I have a couple of the InterMountain-produced rare-scheme cars myself (one of which was given to me, and one that I bought without realizing the color of the ends). A car or two with black ends might be okay in the late 1950s, but I model 1953, when PFE standards were still pretty consistently observed. Here are those two cars, one wood-sheathed and one steel.

The Tichy-origin wood car in the background here, in addition to its black ends, has the oddball numerals that I think InterMountain inherited from Red Caboose. They really do not resemble the condensed numerals actually used by PFE. Some readers may recall that I have expressed myself previously on this topic (see the post cited in the first paragraph of the present post). 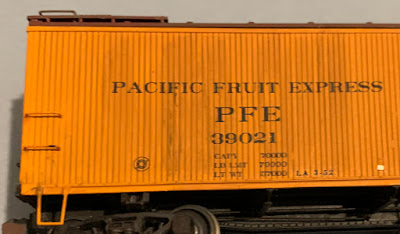 For an example of real PFE numerals, here is a detail of a PFE photo, repeated from the post just cited. It should clearly demonstrate what actual PFE numerals looked like (compare the numbers “2” and “9” in each image).

It may occur to you that I sound a little like a type geek here. Guilty as charged. And if all this sounds familiar, it should; I sounded off similarly last spring (see this post: https://modelingthesp.blogspot.com/2019/04/small-rant-manufacturer-lettering.html ).
To correct the car ends will require painting them boxcar red, thus obliterating the old car numbers, and since I am not delighted with the car numbers on the car sides anyway, the cars will both receive new numbers, in a correct size and style, of course.
I prepared to paint by masking off the car sides and roof. Now masking over the side ladders and grab irons might seem a daunting task, but not so if you use a really flexible masking tape. I used the Tamiya 10-mm tape that I showed earlier ( https://modelingthesp.blogspot.com/2018/08/a-shout-out-for-tamiya-products.html ). It goes on easily and simply gets the job done.
Next I airbrushed the ends boxcar red, using a color I like, Star Brand Paint STR-30, “SP/UP Freight Car Red,” and then hand-painted out the offending side lettering using Star’s STR-27, “S.P./P.F.E. Daylight Orange.” This paint dries glossy enough to accept decals with no other preparation. Lettering was done with the outstanding Microscale set 87-501, the recent version with the superb Dick Harley lettering. If you have a set with this number that’s more than, say, 10 years old, please, please, replace it with a new one. You will see the difference at once. 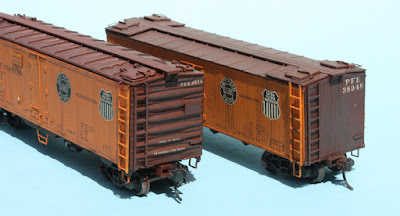 The photo above shows both cars with their new end lettering, and a bit of weathering to match the rest of the model. Note that the wood-sheathed car, as was standard in the early 1950s, has 7-inch end lettering, while the steel car has 4-inch end lettering. And yes, all that small lettering on the lower part of the steel end is available in Microscale 87-501.
I am happy to have removed these anomalous (for 1953) black ends from these two cars, and can now happily use them in general service on my layout. I’m sure they will be rolling in the next operating session.
Tony Thompson
Posted by Tony Thompson at 11:06 AM