Since it’s Thanksgiving and a day devoted to family events rather than modeling, I will indulge in a very small personal note.
I happened recently to be looking at some old magazines at a neighbor’s house, and among his stacks were copies of Science magazine, the publication of the American Association for the Advancement of Science or AAAS. Back when I was on the faculty at Carnegie Mellon University in Pittsburgh, I was a member of AAAS and received Science weekly. It covers every nook and cranny of the world of science and engineering research, and many of the professional articles are opaque to any but those in the article’s particular field. But they also have news relating to research and research funding, which was the main value to me.
It’s been years since I had any reason to even look at a copy of Science, much less continue to belong to AAAS, so looking at old issues was kind of nostalgic. But I happened to pick up one from the late 1960s, and boy, did it take me right back to my days as a graduate student. Why? On the back cover was an ad for the Siemens transmission electron microscope, the model 101, that I had learned on when I was a student. Here’s the ad (click to enlarge if you want to read the text): 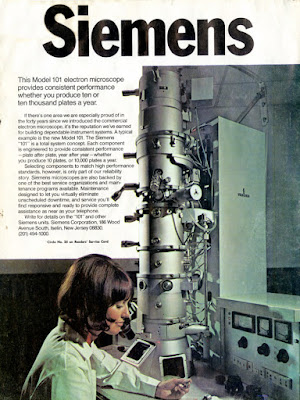 This shiny instrument was advanced for its day, though rapidly outpaced by new Japanese electron microscopes that were making major strides in both capability and ease of use. I will never forget peering into those little apertures at the bottom of the column, near the model’s left hand in the ad, and trying to interpret what I saw.
But after receiving my Ph.D. and moving into a job in industry, I soon was able to make use of a JEM-100B microscope, produced by JEOL in Japan (originally standing for Japan Electron Optics Laboratory, but eventually the initials became the official corporate name). What a revelation! Suddenly I went from a ham-handed beginner who could barely make the instrument do what I wanted, to a skilled and capable microscopist. By no means an expert, mind you, but definitely capable. I actually began to enjoy transmission electron microscopy or TEM. And as I’m implying, it really wasn’t me making a giant improvement, it was a case of a far easier to use and more capable instrument.
But it was just seeing this ad, with the unmistakable image of the Siemens TEM, that took me back to those days, both good and bad. Today there are immensely better TEM instruments, but I’ll never forget my struggles with the Siemens Model 101.
Tony Thompson
Posted by Tony Thompson at 9:31 AM