Over the last year, I have posted a whole series of descriptions of HO scale modeling of armored fighting vehicles or AFVs, in connection with upgrading the old Roco model of a U.S. Army 100-ton flat car. Those cars were built to carry heavy AFVs, and were equipped with Buckeye trucks. I won’t list all the links here, though nearly all of them include the series title, “Roco flat car,” which if used as a search term in the search box at right, will find them all quickly. The most recent of the posts about armor and other loads for this flat car is this one: https://modelingthesp.blogspot.com/2019/10/roco-flat-car-part-10-still-more-loads.html .
One thing I included in those posts was references to a variety of published resources about AFV appearance, design and history. Recently I received an email comment that the publications I referenced were all more than 20 years old, and asking if there were more recent resources. I had cited the ones I felt were most informative, but yes, there are more sources. One is from prolific military history author Michael Green, whose most relevant book is shown below. 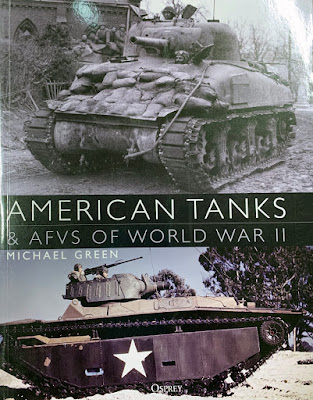 This was published by Osprey in 2014, and remains readily available in both hard cover and paperback, along with e-book versions, and can be purchased used from on-line sellers. It’s a 376-page book and is lavishly illustrated.
Another book I found interesting delves into the design and performance of tank destroyers, like the M36 model of mine that I depicted in this post: https://modelingthesp.blogspot.com/2019/10/roco-flat-car-part-9-more-armor-loads.html . First published in 2004 in both hardback and paperback, The Tank Killers by Harry Yeide is currently available in a modified edition published in 2018. The cover is shown below. 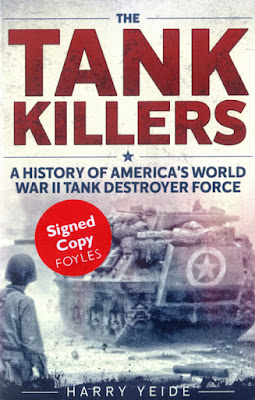 This is a 5 x 8-inch paperback of 292 pages (Casemate Publishers, Philadelphia and Oxford) and contains a great deal of interesting information, along with very thorough documentation (and footnotes).
(As it happens, I picked up this signed copy at Foyles in London, though the seriously quirky and funky Foyles premises of the past have now been replaced with a more modern bookstore building a few doors away, still on Charing Cross Road — and still of remarkable size.)
Both these publications, like the ones I’ve cited in previous posts on this topic, provide the most vital of all information for modeling: prototype appearance and time-line for when certain features were added or removed. However good a model starting point, such as a commercial model, the only way to make sure it’s right, or if not, to make it right, is to have the relevant information.
I think modelers often fail to recognize how much rich information lurks in the world around us, especially conveniently on the internet (where, as the saying goes, Google is definitely your friend) and in many other resources such as published books and magazines.Try and think where all your desired information might be located, and be patient in your search(es). I’ll bet you find more than you expected.
Tony Thompson
Posted by Tony Thompson at 10:44 AM