I received an interesting question from a person who had watched my recent TSG video, showing how my layout is operated. (I posted earlier some comments on that video, along with a link to it on YouTube, at this link: https://modelingthesp.blogspot.com/2019/11/a-new-video-of-my-layout.html .) The question had to do with how I convey to operating crews in a session, how the Guadalupe Local train is made up.
In the TSG video, the Guadalupe Local arrives in Shumala at about the 18:15 mark in the video. Its local function is described, to set out and pick up cars to and from the Santa Rosalia Branch, but it isn’t explained how that works.
This Local is one part of the typical pattern of Southern Pacific train operation. I described this pattern awhile back by using examples from the Coast Division, one part of which I model. That post was intended to show all the variety of ways SP ran freight trains, not only through trains (division point to division point), but also turns, locals, and haulers. (See it here: https://modelingthesp.blogspot.com/2019/04/patterns-of-sp-train-operation.html .)
When the Guadalupe Local arrives at Shumala, the local crew does the switching of cars into and out of the train. (This was a labor agreement to protect local switch crew jobs.) How does the Shumala crew know what they are dealing with? 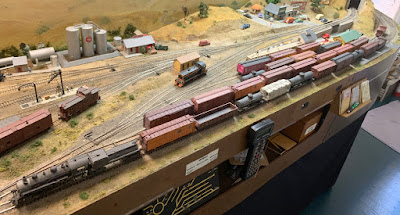 In the photo above, you see the 9-car train just halting at Shumala, and the Consolidation power will cut off and pull ahead to make space for the local switch crew to work. To sneak a peek at what is coming, note that there is a gray covered hopper in fourth position in the train, followed by a tank car.
The Local’s conductor hands the train’s waybills to the switcher’s crew. On the front end of the train will be some cars for Shumala and for the Santa Rosalia Branch. But behind them will be cars for Guadalupe. It is not evident from looking at the rear of the train where the division might be. At the left of the photo below is the same covered hopper seen above.

(On the prototype, the conductor would have exited the caboose and gone into the depot to hand the set-out waybills to the agent, who in turn would have handed the waybills for the pickups to the conductor. But my layout doesn’t have a depot interior for this event.)
So in our operation, the switch foreman now has the waybills, which are in train order, and finds these two for the fourth and fifth cars in the train: 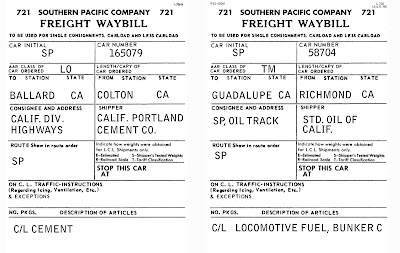 Since the waybills are in train order, he expects (and finds) that all cars behind this tank car are also going to Guadalupe. Some are loads and some are empties, but all are destined to Guadalupe. That means that the switcher will pull off only the front four cars of this particular train.
Then there are usually some cars that the Guadalupe train will pick up, and the switcher places them in the train. The locomotive of the Local then returns to the train, the switch foreman hands all the waybills for the continuing train to the conductor, and the Local proceeds (railroad) eastward, leaving the switcher with its cut. 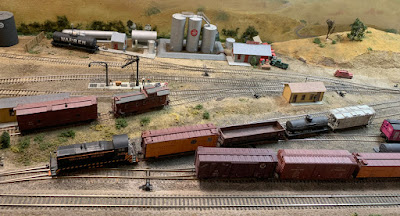 The Local is now proceeding to Guadalupe (off layout, in other words, back to staging) and the Shumala switcher has its next batch of cars to sort. This is a simple process, relies on waybills for the crew to do its work in switching out the local, and gets the Guadalupe train on its way fairly quickly.
Sometimes the train is not so well blocked, and the Shumala switcher will have to pick out the cars to be removed from the train, but ordinarily the San Luis Obispo yard has prepared the train so the work goes as I’ve just described. This is just one of the waybill-based features in an operating session on my layout.
Tony Thompson
Posted by Tony Thompson at 10:49 AM