Waybills, Part 72: is it merely visual?

I encountered a skeptic at a meeting, after one of my talks about creating and using model waybills in layout operations. His comment to me was, “Who really cares what waybills look like?” I was tactful at the time, and just replied along the lines that we all model in different ways.
But the discussions I posted recently on the topic of waybill design, the three preceding posts in my long series about waybills prior to this one, brought out a similar comment, delivered by email. Those posts are about a larger-format waybill design, 5 x 7 inches (The second of three posts is at this link: https://modelingthesp.blogspot.com/2020/06/waybills-part-70-other-waybill-forms.html .)
I would hasten to repeat that I accept differences in modeling goals and choices. But this particular comment sort of annoyed me, so I decided to try to make my point with a kind of whimsical illustration. What follows, I hope, will be recognized as just that, and nothing more.
Let me choose such an illustration. Let’s say, that instead of waybills, we talk about box cars in model railroading. After all, such a model just fills a spot in a train, or on a siding. If it carries out that assignment, would we care what it looks like? Why not something like this? The body is a little simple, but it has trucks and couplers, so it will operate just fine.

Ah, you say, but that couldn’t serve as a model freight car; it isn’t lettered. Good point, and I can fix that pretty easily with a Post-It note; now it’s AB&C 1245. 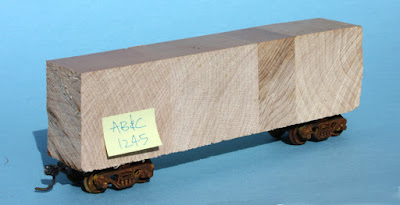 Notice how convenient this is; whenever we need some different freight car for operation, just apply a different Post-It note.
So is this an exaggeration? Of course, and intentionally so, but in my opinion not much more so than using a waybill along the lines of this one: 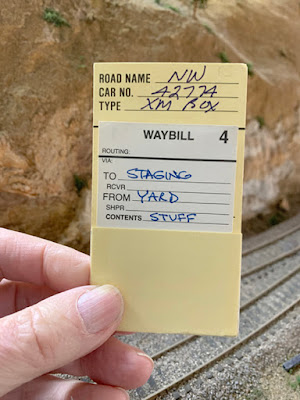 This “waybill” bears about as much resemblance to the prototype as does the wood-block box car I showed above.
Do any of us use the prototype waybill in model railroading? Not to my knowledge, but the post I referenced in the second paragraph of the present post shows an effort to get close to the look and content of a prototype waybill. One might then have such a bill filled out like this: 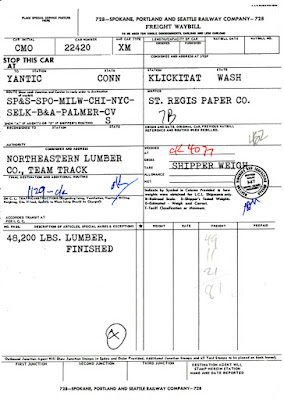 I leave it as an exercise for the viewer, whether this waybill is more prototypical than the one shown just above it.
What’s my point here? We may or may not aspire to reproducing all aspects of prototype railroading in our models and in our layouts. As many people have said, there is nothing wrong with any of the many versions of our hobby that an individual may choose to pursue. But if you ignore too many aspects of reality, and yes, I include paperwork in that, you run the risk that, as Tony Koester put it, you are just playing with interesting models of railroad hardware, not trying to model the reality of railroading.
It has always been my modeling goal to try and reproduce at least a decent version of what railroading was like in my chosen locale and era, and on my chosen railroad. I want the crews that come for operating sessions to experience the flavor of what operating on the Southern Pacific was like in 1953. For  me, improving waybills are every bit as much a part of my goals as improving the looks of my locomotives and freight cars, or building better structures and scenery.
Tony Thompson
Posted by Tony Thompson at 10:58 AM