This post is stimulated by an email I received a few weeks ago, and I have been cogitating about it since, not because I think it is hard to answer, but maybe because it is hard to answer simply. I will give it a try in this post.
The question was this (I’m paraphrasing): “How do tank cars operate in service? I understand that a company like, say, Dow Chemical owns tank cars and ships its products to customers in those cars. But what about the leasing companies like General American? or railroad-owned cars? How does that work?”
As I said, this isn’t necessarily easy to answer simply, but I will try. (Background on most points below is available in my article on tank cars in Model Railroad Hobbyist, the issue for February 2016, still available on line for free, to read or download at their website, www.mrhmag.com .) I have also provided a lot of facts and car drawings in a talk handout (you can find it here: https://modelingthesp.blogspot.com/2013/01/new-tank-car-handout.html ).
These are the basics. First, essentially all tank cars carry liquid cargoes (though some are liquified gases), and liquids can leave residue in the cars. That in turn could readily contaminate a subsequent load of something different.
Thus the first principle is that tank cars assigned in some particular service, for example, carrying heating oil, will tend to stay in that service. Tank cars certainly can be cleaned, to permit assignment for a different cargo. But this cost time and money, and was avoided as much as possible.
So a particular car owned by General American, for example, might carry heating oil, and be assigned to a particular oil company. The car, then, would move between one or more of the oil company’s refineries, and its bulk oil dealers, delivering heating oil. It might show up repeatedly at one particular oil dealer, or only ever appear once at that dealer. But the key point is that when unloaded, it would be moved back to the refinery from which it had come.
In thinking about such a car, it’s useful to remember that about 95 percent of all tank cars in the United States in the transition era were privately owned, with barely 5 percent in railroad ownership. And fully 90 percent of all U.S. tank cars were the general service or ICC 103 type, AAR Class TM. So that car of heating oil might look something like this, a plain black paint scheme with minimal lettering.

This photo shows an 8125-gallon ICC 103 tank car; photo from the Richard Hendrickson collection (location, date and photographer unknown).
Another point of importance about a car like GATX 4121 is how privately owned tank cars were handled. A very clear description of the rules for this were presented in a previous blog post, concentrating on how empty cars were to be handled (see that post at: https://modelingthesp.blogspot.com/2016/12/sps-instructions-to-station-agents-part.html ).
Some cars were sized to carry specific cargoes. A good example is chlorine, shipped in high-pressure cars. Because of the high density of liquid chlorine, these were usually 6000-gallon cars riding on 40-ton trucks. (To illustrate, 6000 gallons of liquid chlorine weigh about 74,000 pounds.) This means that such a car is not interchangeable with other tank cars that were designed for other cargoes. An example is below. 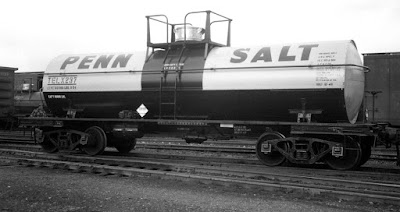 This photo, with date, photographer and location unknown, is from the Richard Hendrickson collection. The 1940-built tank car had a yellow body with black center band and bottom sheet, and had been reweighed in 1954. The reporting marks are TELX, a mark owned by the Pennsylvania Salt Mfg. Co. of Tacoma, Washington, a PennSalt subsidiary, so this is a car owned by the company which produces its cargoes. As a high-pressure car, it’s classed as ICC 105A-300, capacity 5900 gallons.
A car like this, or any privately owned tank car in assigned service (as were most such tank cars), would have directions on file with the railroad agent at every place where the car might be delivered. These directions would either describe returning the car to its origin point, as I mentioned above, or would identify the owner’s preferred collection point for cars of this type. I covered this kind of car direction in a previous post (that post is here: https://modelingthesp.blogspot.com/2015/03/waybills-part-38-handling-empty-tank.html ).
The foregoing PennSalt car, owned by the manufacturer, was by no means the typical specialized tank car, in this case for chlorine. Many such were owned by leasing companies and then painted and lettered for the lessee. Here is an example, for Shippers Car Line (SHPX) leased to DuPont.

Finally, it is often assumed that any railroad-owned tank cars are exclusively in company service, for fuel, lube oil, or other company needs. But this was certainly not true of all railroads. In particular, it’s known that Southern Pacific, owner of one of the largest railroad tank car fleets, only used about a third of its tank cars for company shipments. The remainder were in commercial service, sometimes under lease. To show a single example, here is SP 60179, an 8000-gallon car of Class O-50-14, photographed in Kansas City in 1959 (George Sisk photo).

This car may not be obviously leased (and indeed most cars do not exhibit leasing information), but it happens that the lessee is stenciled on the center sill, as you see below in a detail of the above photo. Anderson, Clayton & Company of Houston, Texas handled cotton and cotton products, thus the likely use of this car is to carry cottonseed oil.

Posted by Tony Thompson at 9:32 AM