The purpose of this post is to summarize the handling of empty tank cars, nearly all of which were privately owned and in some kind of leased or assigned service. Some of the points I will make in this post have been made before, and whenever that’s the case, I will provide a link to the prior discussion.
The primary previous post about empty car billing is Waybills 36, and can be found here: http://modelingthesp.blogspot.com/2014/10/waybills-36-empty-car-waybills.html . I have also introduced the topic of empty cars, including tank cars, of private ownership, in my post titled Waybills Part 31: http://modelingthesp.blogspot.com/2014/03/waybills-part-31-empty-private-cars.html .
A good place to begin is with an inbound waybill for a loaded tank car, such as this Erie bill for a carload of soybean oil. (You can click to enlarge.) 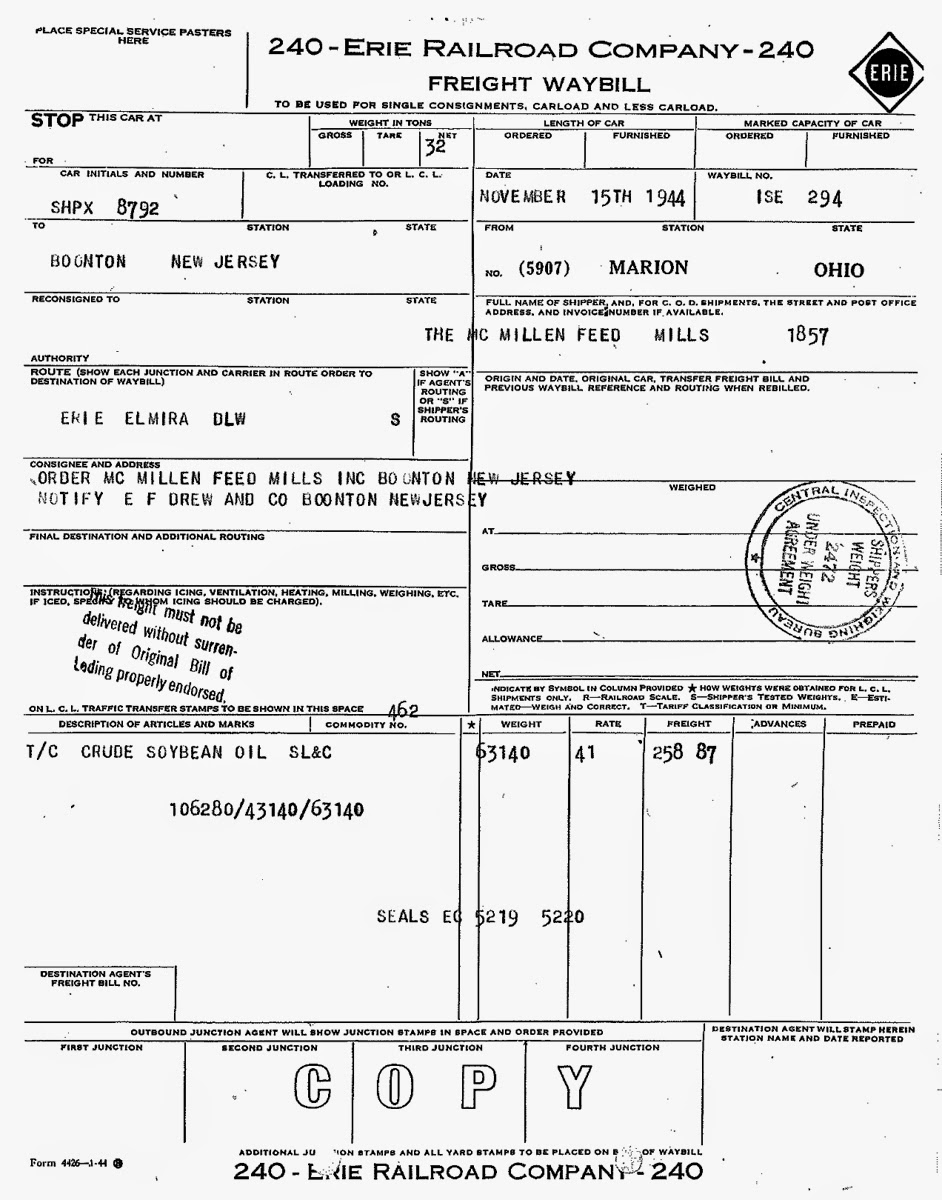 When the car is empty, the consignee calls the local agent or car clerk to notify them that the car is empty and ready to be picked up.
Here is the process undertaken by such a clerk when notified about an empty private tank car, as clearly explained, in some detail, by Harry Dolan in Waybills Part 29 (at: http://modelingthesp.blogspot.com/2013/06/waybills-29-waybill-preparation.html ). The agent or clerk looked up the inbound waybill to see who owns/leases the car. Upon determining the lessor, the clerk then looks to see if there is a file with directions for such cars (such as the Dow Chemical document shown below). On that basis, a waybill for return travel is made out.
What might those instructions look like? I will repeat here a document from the Part 31 post, sent to me by Tony Koester, and obtained by him from Geoff Barbier: 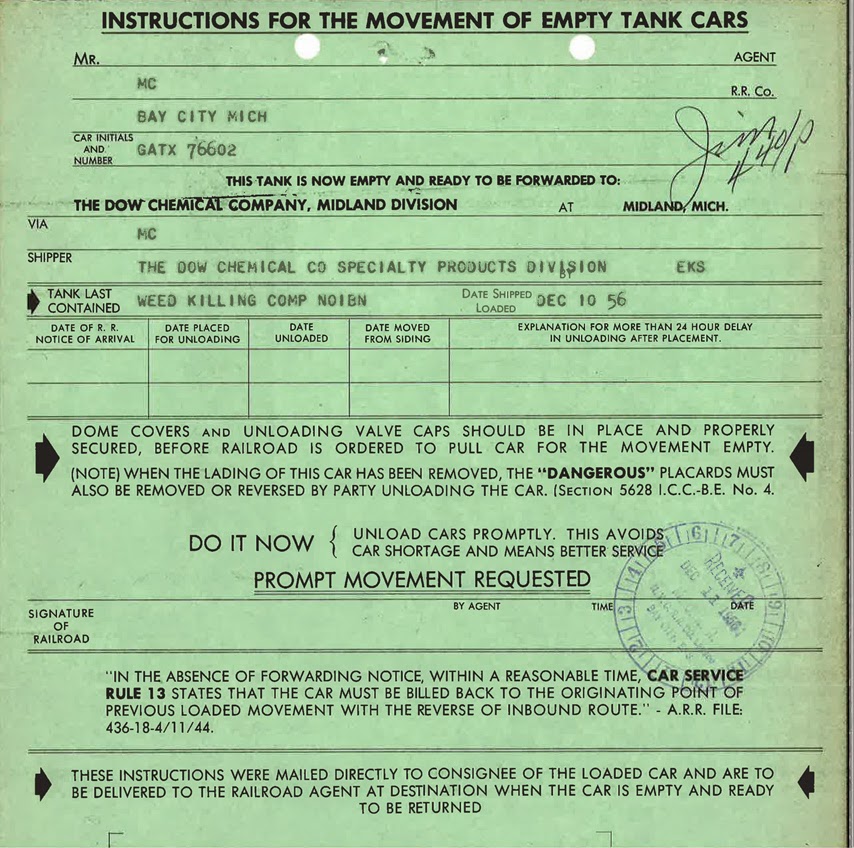 I discussed the contents of this document in Part 31, but here will just point out a detail of the cargo description. Here is that line of the document:

The acronym “NOIBN” stands for “not otherwise identified by name,” and is visible throughout any tariff document. Whenever a type of product (let’s say, paper) has numerous specialty versions, they must be described by their full name, but if the product being shipped does not fall exactly into any of these specific versions, it is then described by NOIBN, and a kind of averaged tariff is assigned.
Usually the private car was returned empty using a regular freight waybill form. This had two benefits: the most important benefit is that the previous cargo had to be identified for safety reasons (see the notation above on the handling instruction document). A second reason was to speed up return of privately-owned cars in assigned or lease service.
This waybill usually showed the agent making out the waybill as the shipper, though consignees who regularly received a type of private tank car might be shown instead as the “shipper” of the returning empty. Here is an example in model form, illustrated with the superb model recently offered by Tangent of an acid tank car: 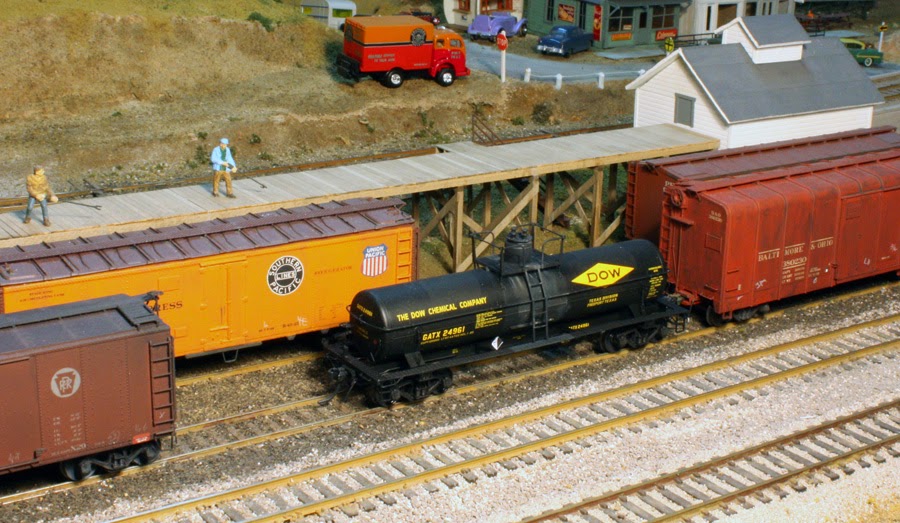 Note the “empty” placard on the car. The model waybill could look like this, with the agent as “shipper,” and containing the notation “record rights, reverse route” to explain the routing: These are some of the particular details associated with empty private cars, especially tank cars, for which return waybills were often used. For more detail, please see some of the prior posts cited above.
Tony Thompson

Posted by Tony Thompson at 5:53 PM