In my first post about this creek, I described its location and history (you can read it at: http://modelingthesp.blogspot.com/2015/01/modeling-oso-flaco-creek.html ), and showed my very earliest work to develop a creek bed and banks.
Now I want to take up the refinement of this creek bed. My first step, moving forward from the view shown in the previous post (just cited), was to make the banks wider and gentler. I also glued down the Homasote on the right side of this photo, and began development of its bank sides. 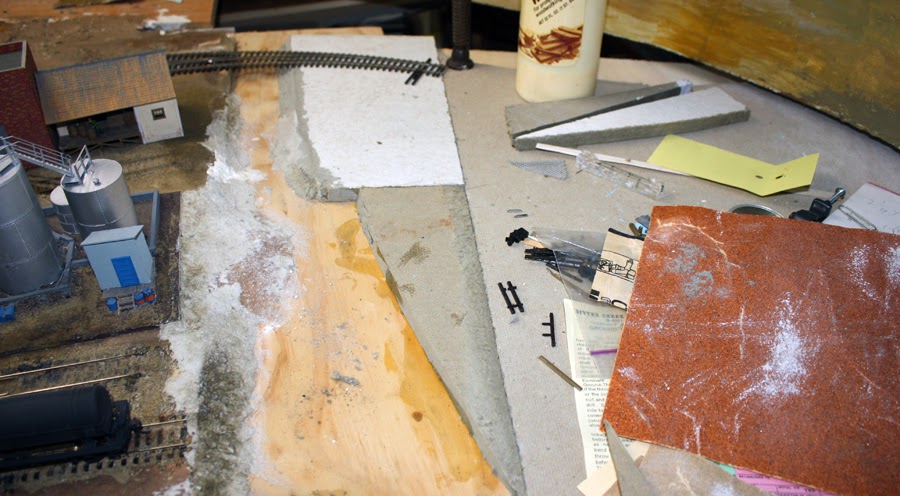 You can see the location where the trestle over the creek will be, in the background where a piece of track lies across the creek. I had just finished sanding the roughness of previous paper mache layers, thus the sheet of garnet paper at right.
Next I wanted to get a little bit of a meander to the path of the creek, which in turn means steepening the banks a little on the outside of the curve, where the creek cuts into the bank at higher water, and flattening the bank on the inside of the curve, where slower water drops its sediment load and makes a gentle slope. That would be easily accomplished in adding more bank shapes beyond what is shown in the photo above, as you see next. 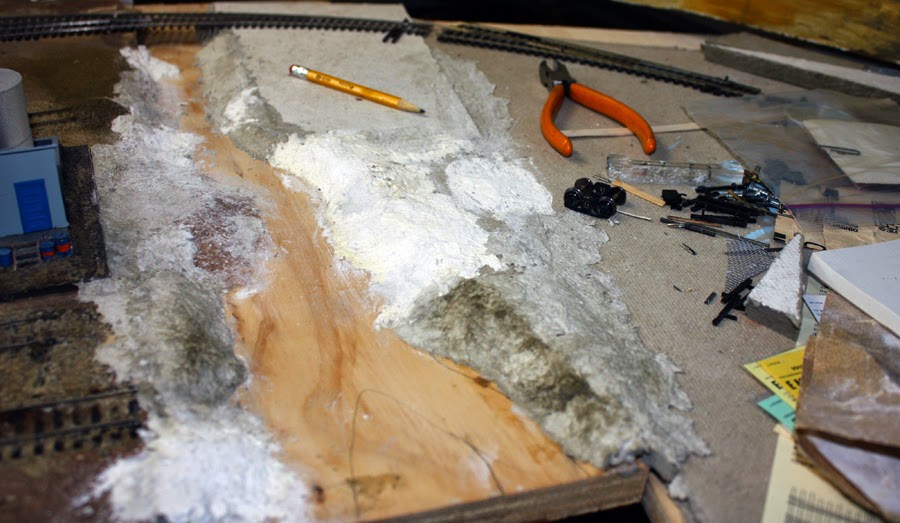 I also want to attempt to build an island in the wider section nearest the aisle. Once the fascia here is installed, it will define the contour of the creek banks at the layout edge.
I installed the fascia (see my description of that task, which is at this link: http://modelingthesp.blogspot.com/2015/02/layout-fascia-additions.html ), so then I could finish contouring the creek banks at the layout edge, add the island, and paint everything “dirt” color (I use Rust-Oleum’s acrylic color “Nutmeg”). Though the creek bottom remains without topography, you can see below the basic creek shape which has evolved. Note that beyond the trestle site, no contour is yet created. The intention is to bend the creek to the right, toward the backdrop, so it can disappear gracefully.

I added a few more pieces of Homasote at the center rear of the photo above (just left of where you can see the dark area at the base of the backdrop). This brought that area up to level. I then carved in a representation of a “disappearing” creek as it heads for the backdrop. 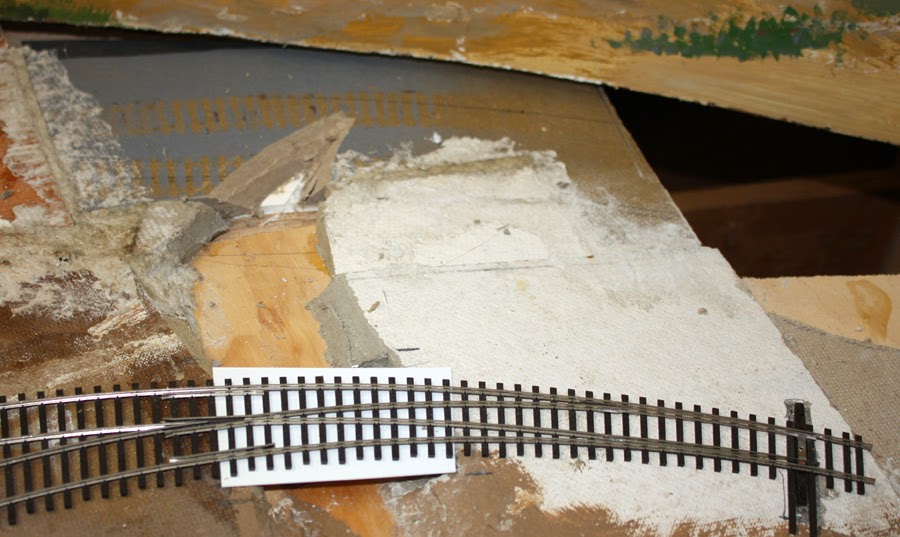 The contours need refinement, but it’s clear what is being done here: to curve the creek so it can fade toward the backdrop. In the foreground is the alignment of track crossing the creek, which I will bridge with a trestle (more on that later).
The next problem is the plain plywood bottom. There should be a little topography to the creek bed, and I decided to begin with a coat of shellac. This seals the wood and avoids any problem with a subsequent thin layer of water-based materials, like paper mache, raising the grain. Now I am almost ready to scenic the creek.
Tony Thompson
Posted by Tony Thompson at 10:47 AM