I introduced this topic with a discussion of model and close-up photography in general, and suggested some good background books on that topic. I also listed my three key requirements for successful model photography: having enough depth of field, enough light, and enough camera stability (see: http://modelingthesp.blogspot.com/2015/02/photographing-railroad-models.html ). I followed up with a second post, addressing more specifically railroad models but still describing the subject in a rather general way (that post is at: http://modelingthesp.blogspot.com/2015/02/photographing-railroad-models-part-2.html ).
In this post, I will show the simplest and often most convenient way to photograph railroad models. I refer to this as a “table-top” set-up, though there need not be an actual table. In many though not all cases, I do use a small portable table, lightweight, folding for storage, and inexpensive. It is a “personal table,” Model 8354, from Lifetime Products; it can be seen here: http://www.lifetime.com/gallery/tableschairs/personal-tables/26-x-18-personal . Tables like this are sold at many big-box stores such as Costco. 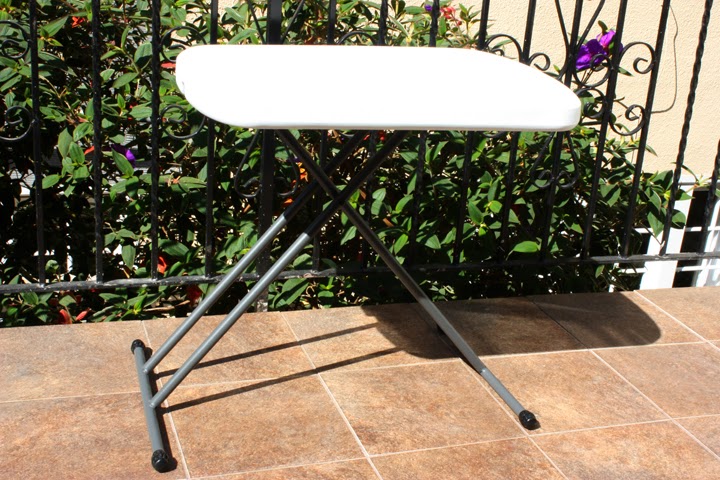 You can see here the steel legs, and the molded styrofoam (or equivalent) top.
The simplest way to make a table-top set-up is to place a white or solid-color background onto the table. I like the variety of colored papers available at art stores, such as this deep orange, which I’m simply placing on the table top. 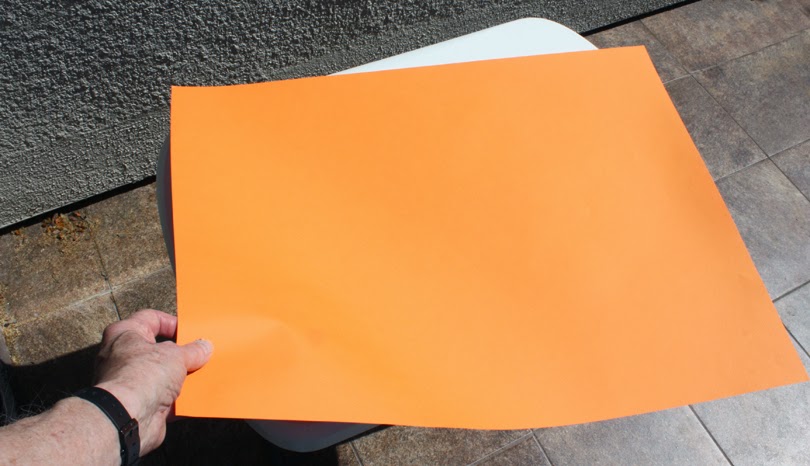 All that remains is to place the model or other object to be photographed on it. If you do this outdoors, as shown in the preceding photos, ordinary sunlight provides two excellent features: natural light, and plenty of it. In fact, you can usually hand-hold your camera and get satisfactory results. If need be, of course, you can bring a tripod into play, but often won’t need it. 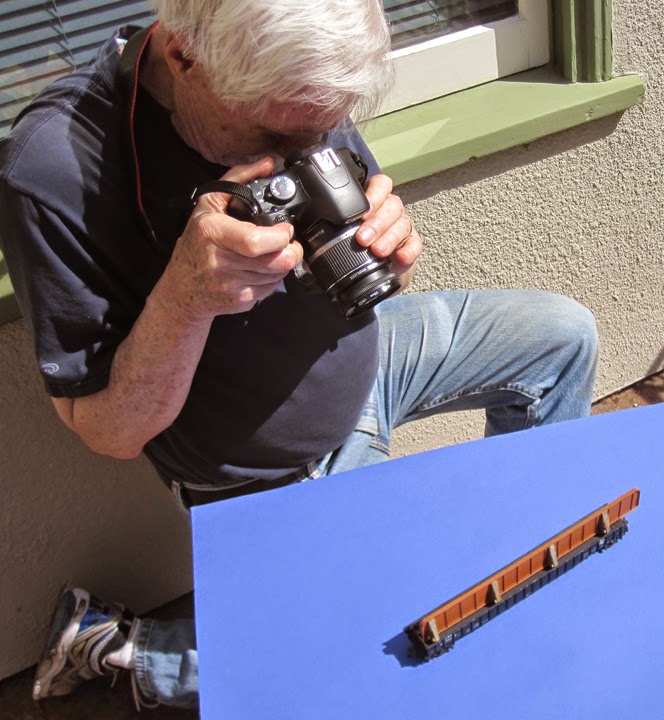 Here I’m using a blue art paper as background to photograph one of the cars among Richard Hendrickson’s open-car loads (described in a previous post at: http://modelingthesp.blogspot.com/2015/03/richard-hendricksons-multi-car-loads.html ). Obviously here I have freedom to move around or above the model to get the perspective I want for the photograph, or to move the model relative to the sun angle for the desired lighting, making this one of the most flexible arrangements you can make.
Just to repeat what was mentioned in prior posts, my digital SLR is a Canon model XSi, here with an 18–55 mm zoom lens. I have it set on “aperture priority,” stopped down as far as it will go, which is f / 25.
For some purposes, especially if you want a more nearly eye-level view, there is the problem of background. I make a seamless backdrop by the old stand-by, the curved sheet of paper. First, something needs to support the vertical part, for example this bar clamp on my table (many other supports can be arranged). 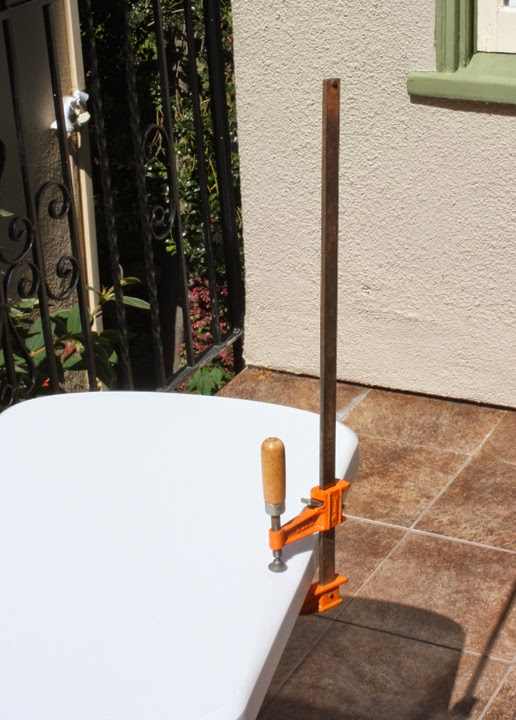 Then a piece of paper, white in this case, or any chosen color in the way I have described earlier in this post, is clipped to the upright (here, attached with a clothes pin). 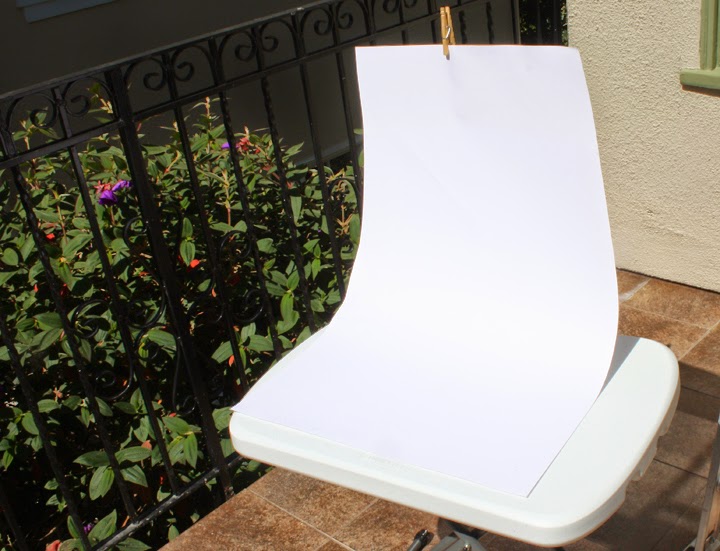 Then one can shoot without worrying about what is behind the model, as you see me doing here. 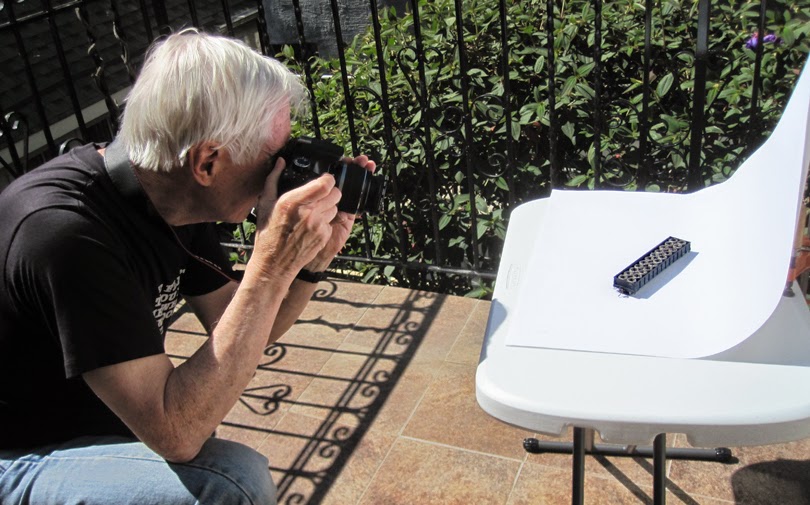 The seamless background set-up can be used indoors too, with the addition of suitable lights and, almost always, a tripod for the camera. I just like the convenience and speed of working in sunlight. By the way, here is the car I’m shooting in the view above, one of Richard Hendrickson’s gondola loads.

The one drawback to full sunlight is that shadows can be rather dark. Sometimes you want less contribution from those shadows. One way to take advantage of the plentiful light of daytime but without the strong shadows is simply to photograph outdoors in the shade (or take advantage of a cloudy day). But the light level can be a lot lower, and a tripod may be needed. Still, you get good light balance and no need for artificial light.
The table top is a great set-up for many kinds of model photography. Because of the abundant light when it’s done outdoors, the camera needs no tripod when stopped all the way down for depth of field. I will describe more complex photographic issues, including layout photography, in the next post in this series.
Tony Thompson
Posted by Tony Thompson at 10:23 AM