The late Richard Hendrickson was a creative modeler. (I wrote an appreciation of him after his passing last year; you can read that memorial piece at this link: http://modelingthesp.blogspot.com/2014/07/in-memoriam-richard-hendrickson.html .) Among the things I know he greatly enjoyed was the building of open-car loads, always attentive to prototype examples. In this post, I will show a few of the ones he constructed, that required multiple cars to carry them. Some of these cars have gone to new owners, but I photographed almost his entire collection before dispersing much of it to his many friends, so I can show them here.
A simple example is a pipe load a little too long for the gondola in which it is loaded. This is no problem with drop-end gondolas, and the solution is to drop one end and use an idler flat car at that end of the load. Here is Richard’s model of that arrangement. The gondola is SP 94033, one of the cars he kitbashed from an Athearn body in his two-part story in Prototype Modeler (in the September-October and November-December issues of 1982, pages 31 and 12).

The 40-foot flat car has some dunnage on its deck from some previous load, something Richard modeled on most of his empty flat cars. The pipe load is banded with steel strapping, thus the stakes do not have to be tied together over the top of the load, exactly as shown in the AAR Loading Rules book.
Another example of a two-car load is this interesting case where the load has to be able to swivel. The flat cars are SSW 81541, a 40-ft. Tichy model, and L&N 24560, an Athearn 50-foot flat car shortened to the prototype’s 47 feet. Both have heavily distressed decks. Again, the arrangement follows the AAR rules. You can click to enlarge.

The load does indeed swivel on both cars, and is fixed to the L&N car, as you see below. The pivot is a screw and a nut under the load. The metal socket on the deck of the SSW flat car at right is evident here, as the range of motion. Each swivel point is at the center of its flat car.

The bottom of the un-fixed end of the load has a pin, which fits into the socket on the corresponding flat car. Inverted, you can see the arrangement.

The two flat cars have coupler knuckles glued together, because with the inflexible distance between the two swivel points for the load, coupler slack can cause problems. But I have operated this pair of cars through tight switches, S-curves, and tunnels, and it operates flawlessly.
At one time, Richard had also modeled a two-car load of creosoted poles, using a pair of 40-foot flat cars, and a swivel arrangement similar to the pipe load above. I think it must have been among the 35 or so models Richard had stolen from his rental car in Philadelphia in 1990. Here is a similar load, just using one car, on a WestRail 53-foot flat car, UP 57255. It carries a “Do Not Hump” placard.

The tour de force of Richard’s multi-car loads, though, has to be this complete bridge span, with both girders and the deck framing. Idler flats are required between each load-carrying car, and the center gondola has both drop ends lowered.

Here the cars are, from left, Precision Scale brass 65-foot gondola NYC 726034, 40-foot flat car W&LE 1974, Proto2000 52-foot gondola P&LE 40136, 40-foot flat car NYC 496240, and another Precision Scale brass 65-foot gondola, CRP 89065. Since the cars are coupled normally, without any swivels, there is no problem with operation of this consist through the tightest curves, but the sheer height of the center frame would limit its operation on some layouts. The height of the frame reaches exactly to the top of the NMRA clearance gauge.
Both of the flat cars here are originally Athearn, but have reworked decks, all stake pockets replaced with Tichy parts, and new vertical staff handbrakes.
Here is a perspective view just of the car with the high frame, the load aligned so the highest point is at the center of the car width. This car also has a “Do Not Hump” placard. 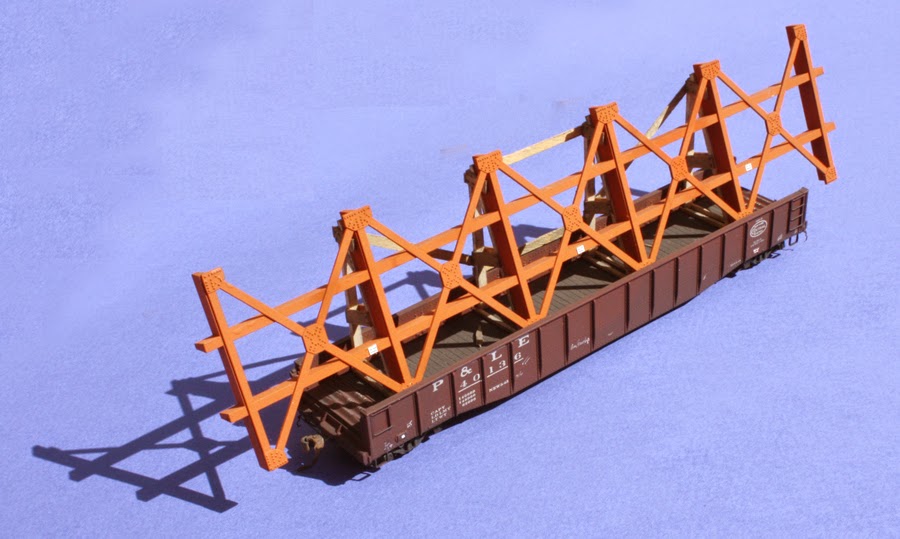 I will later present more of Richard’s excellent open-car loads, but these multi-car loads are very striking, and should give any modeler ideas.
Tony Thompson
Posted by Tony Thompson at 9:34 AM