An SP depot for Santa Rosalia

At the end of my mythical Santa Rosalia Branch, off the SP Coast Line, there is a small town, and it needs a depot. Southern Pacific had 26 numbered designs of standard depots, from small to fairly large, all of frame construction. (These have all  been covered in masterful detail by Henry Bender, in his book, Southern Pacific Lines Standard-Design Depots, Signature Press, 2013.) So which would I choose?
It might be thought that if Santa Rosalia is not a very big town, it would have a small depot. Actually, this in many cases is backwards. The larger depots had an upstairs living quarter for the agent, and such quarters were only needed in the smaller towns where convenient housing might otherwise not be available. Indeed, SP depots at remote places with no town around them at all, like Surf or Grass Lake, were the two-story designs. So a two-story depot is appropriate for Santa Rosalia.
In choosing one, the most obvious choice in a number of ways is SP’s Common Standard No. 22 depot. It was built in several places near the location of my mythical branch (at Oceano and Guadalupe), and was SP’s most numerous standard depot, with more than 76 of them built, according to Bender. Like many of the standard designs, CS 22 was a “combination depot,” meaning it provided both passenger and freight service. Finally, because the CS 22 is so familiar, it is also an iconic SP structure, helping to make my mythical branch line have an SP “look.”
Here is a photo I took in 2009 of the CS 22 depot at Oceano, which has been moved away from the tracks and restored. The caboose in front of the structure makes it difficult to photograph, but this view shows the overall style, from what was originally the “street side.” 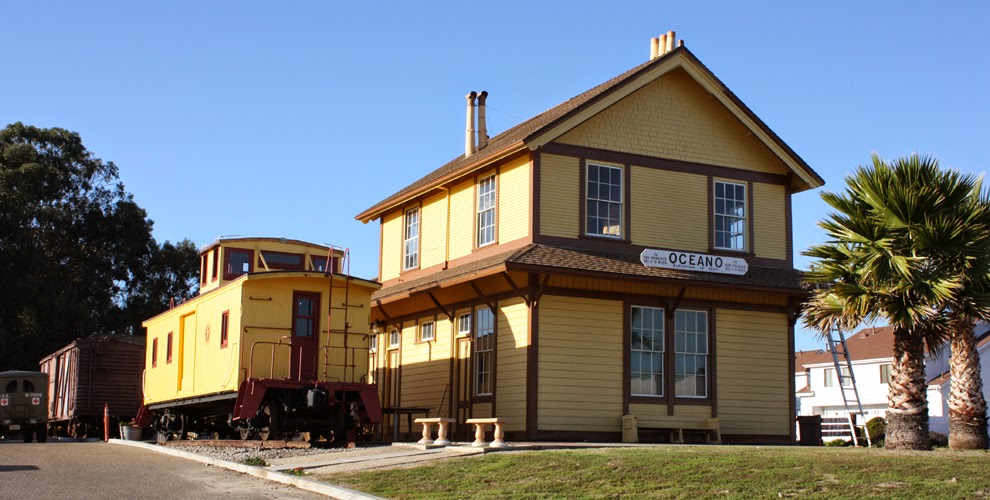 The CS 22 also happens to be a convenient modeling choice, because American Model Builders or AMB has a kit (LaserKit) for this depot, their kit no. 134. (You can visit them at: http://www.laserkit.com/bldgho2.htm .) The history provided in the kit directions predates the Bender book, and is inaccurate in several details, including the dates during which this design of depot was built. In fact, they were built from 1893 until about 1910. But the kit is a marvel of clever design and beautiful parts. Here’s the box. 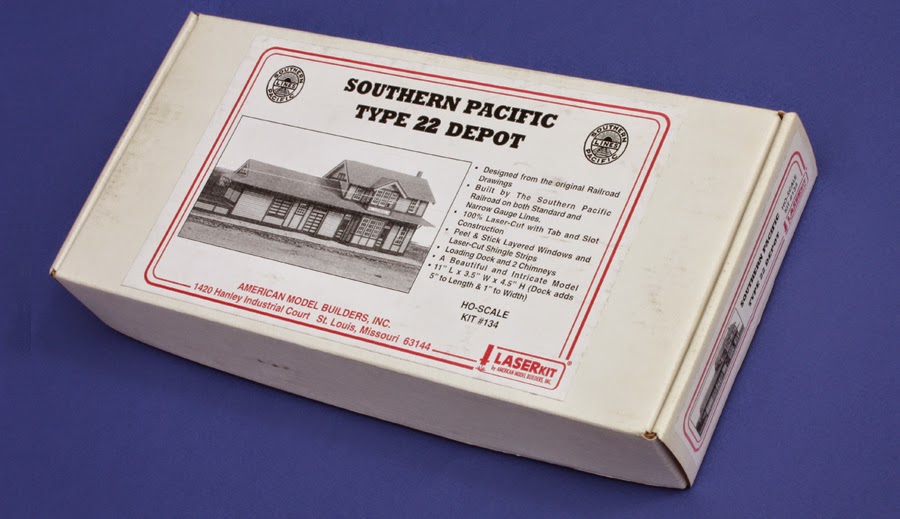 By the way, this is a “right-handed” depot, with the two-story section to the right when viewed from trackside. The SP also built “left-handed” CS 22 depots, and AMB has a kit for that also, their no. 176.
I began by separating out the various sheets of laser-cut parts so I could prepaint them in the right depot colors. The kit design by AMB nicely groups common-color parts on separate sheets, so this task is easy. I began with Testor’s White for all the window sash. Then I used Tru-Color’s correct Southern Pacific depot colors for all wall and trim. Walls are Colonial Yellow, TCP-153 (note that roof gable trim boards, parts F-11 through F-16, are yellow also), and all other trim is Light Brown (TCP-163, which Tru-Color call “Depot Trim Brown”). This was airbrushed.
The first thing you are asked to do in the kit directions is assemble six wall sheets. A total of 22 pieces make up these walls, easily edge-glued with yellow glue and allowed to dry under weight. Here are the assembled wall sections (bay window portion not shown), along with the window sash pieces in white. 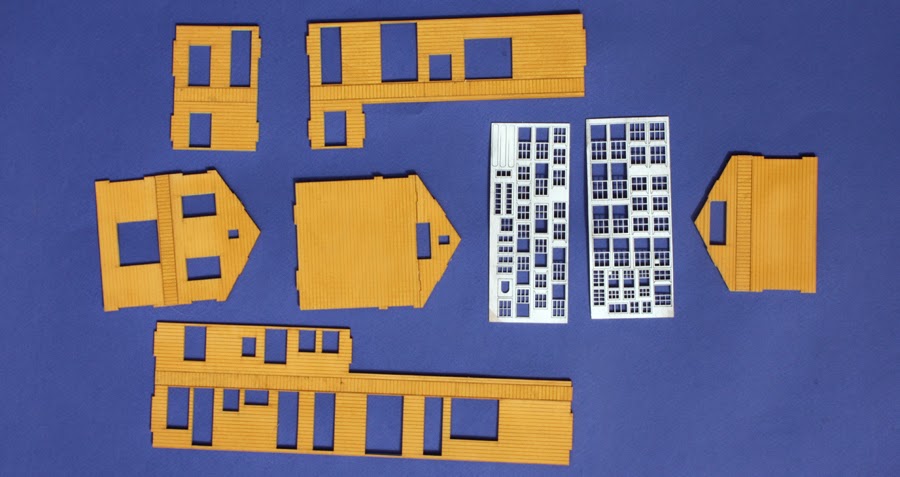 Once these were complete, I also realized that one can often see inside a structure like this, and ought not to see the raw wood back of the walls, so painted the back of all the wall segments with Star Brand “Sea Foam Green” (STR-08), one of those annoying institutional green colors (SP used it inside diesel locomotive cabs). Many SP buildings had cream-colored interiors, so that would be an option also.
The next kit step is to glue all the door and window “inserts” (frames) into the assembled walls. These are Light Brown. There are 29 of them. I only mention the numbers here as a forewarning that though this kit goes together perfectly, and is beautifully thought out, it does have a lot of parts. Patience helps with this one.
I will continue the description of my progress on this model in future posts, though only in detail where I diverge from the kit instructions.
Tony Thompson
Posted by Tony Thompson at 8:01 AM