In Part 1 (see: http://modelingthesp.blogspot.com/2015/03/an-sp-depot-for-santa-rosalia.html ), I described the background and starting point of constructing an American Model Builders (AMB) laser-cut wood kit, their kit no. 134, for an SP CS 22 depot. In that post, I showed some of the prepainted wall parts.
Once walls are done, door and window inserts are added, then begins the installation of windows. This is a somewhat tedious part of the job, though it results in superb window treatments, and because the parts are assembled with peel-and-stick parts, does go quickly. However, if you have a kit issued some time ago, be careful of the drawings in the kit directions, in identifying individual windows and the matching glazing pieces. The original kits, issued in 1996 and thereafter, had some errors in the directions. More recent kits (since around ten years ago) have corrected directions.
Here is what to watch for with older kits. The directions show, for example, an E19 window, and the parts layout shows that too, but the corresponding G19 glazing is mis-identified; the two glazing pieces for the two E19 windows are labeled G20 in the glazing layout. And in the layout, what is labeled as G19 is really G15, and G13 is really G20. Similarly, the bay window glazing, parts G3 through G6, are misidentified in the glazing layout, though all pieces of correct size actually are present. You just have to fit the window sashes to each glazing piece to make sure which is which.
This slight mixup in the drawings should not be taken as criticism of what really are excellent sash windows. I have rarely seen their equal in any kit. I simply recommend checking each window frame against what is supposed to be its glazing, before trying to assemble any individual window. There are 30-some windows, not counting the sash windows as two parts each, nor counting the glazing in doors. Though assembly of all these pieces can be a little tedious, it is very rewarding because of the excellent appearance of all the windows.
With the wall sections all having received their doors and windows, the exterior side of them looked like this (one part of bay window section not shown). 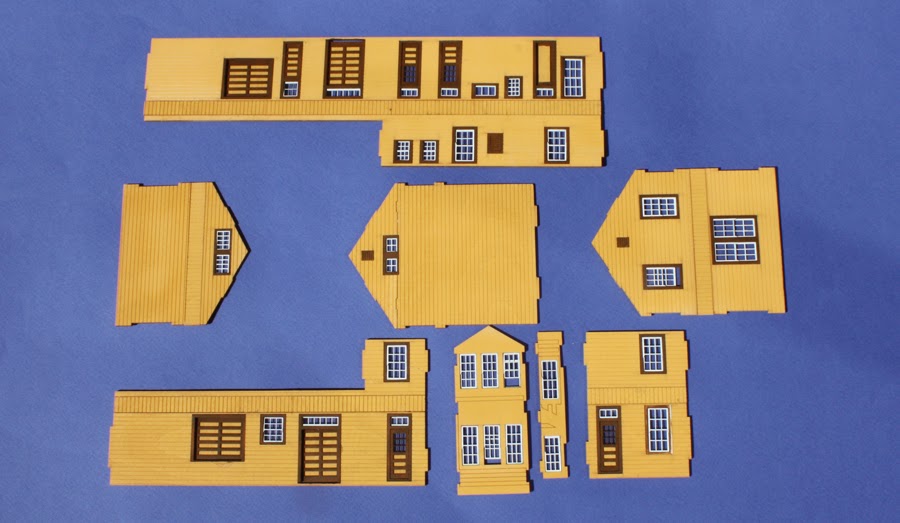 The next step is the gluing together of various wall sections into sub-assemblies, then of the sub-assemblies into the full structure.
At this point, I might add that I received an interesting question about this kit via email, as to how “accurate” it is. One answer is that it is extremely accurate in representing the standard CS 22 design. The other answer, though, is that most prototype depots of this and other standard SP designs differed in a variety of ways from the “standard” drawing. The freight room portion of each depot was originally built to a length determined by expected traffic, and not only did this differ from place to place, but as events proved the original design to be too large or too small, the freight room end of the depot was often lengthened or shortened accordingly.
In addition, many other changes are evident in photos of prototype CS 22 structures. As built, there were no indoor sanitary facilities, with outhouses being provided; over the years, downstairs restrooms, at first for men and in most depots, eventually a women’s room also, were added. A bathroom in the agent’s quarters upstairs was added later in many depots too. And many depots show an extra window or two at various locations. These kinds of changes are evident in photos from Henry Bender’s book, Southern Pacific Lines Standard-Design Depots (Signature Press, 2013). So even though CS 22 was a standard design, many variations existed, and anyone wishing to construct an accurate model of a particular CS 22 will need photographic coverage of the entire building, close to the era to be modeled.
In my case, I can build the kit without qualms, since my location is mythical, and a “standard” CS 22 version is just fine for me.
Returning to the AMB kit, when I went to glue together the sub-assemblies of walls into a full structure, I discovered the first part of the kit that did not go together perfectly. This was the floor, which had one pair of recesses for wall tabs wrongly located. I simply widened them to the correct location.

The change is quite visible, and the slots were  enlarged toward the right in this view. The basswood floor was easy to modify this way.
At this point, as mentioned, the kit directions suggest connecting pairs of wall units into sub-assemblies, then assembling everything onto the floor. This step is a pleasure, as suddenly you see the entire building emerging into view. 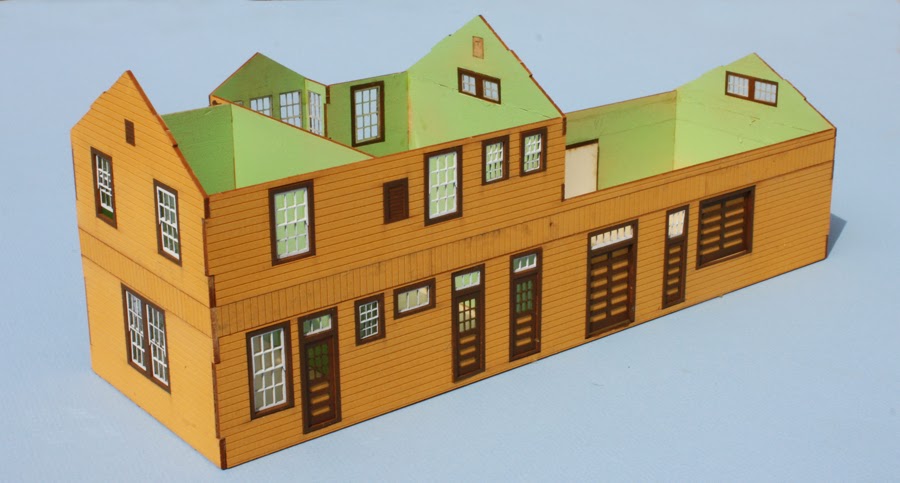 Next come the trim boards, already pre-painted light brown, and application of these boards is also a peel-and-stick process, thus should go swiftly.
One addition I am considering, is to make a removable second floor and a removable roof over the second-floor part of the depot. If nothing else, this will help with sight lines through the structure, and of course with later additions of interior detail or lighting, if I should want to do that some day. More on this depot later.
Tony Thompson
Posted by Tony Thompson at 11:38 AM