Many industries that are rail-served have loading docks (others have doorways opening directly onto trackside). In model form, these may be supplied as part of a kit structure, or have to be constructed for scratch-built structures. They are usually not complex to build. I have mentioned the basic process in my column for Model Railroad Hobbyist for March 2014, which described building a bulk oil dealer; like all issues of MRH, it can be downloaded free at their website. (For this particular issue, go to: http://model-railroad-hobbyist.com/magazine/mrh-2014-03-mar .) That loading dock was simply a styrene box, which is like the approach I want to show now.
In this post I show the assembly of two such freight docks, one quite simple and the other a little more involved. They do follow the “styrene box” method I’ve used before, not only for my Associated oil bulk dealer, referred to above, but also for the loading dock for the machine shop behind my roundhouse (see: http://modelingthesp.blogspot.com/2014/02/a-roundhouse-for-shumala-part-5.html ).
I like to use scribed styrene for the kind of loading dock built of planks. A material I often choose is Evergreen sheet styrene No. 4100. This is a V-groove material, 0.040 inches thick and with 0.100-inch groove spacing. This is about 3 scale inches thick and about 9 inches wide, a realistic size. The V-groove is an exaggeration, since the prototype would not be grooved, but it helps provide definition to the planks, and also helps show the wear of such planking, often notable at plank edges.
One of the two platforms I am describing here is for my local facility of California Highway Commission (as it was then called). Such platforms were typically about four feet high. The dock has an incline to facilitate vehicles entering or leaving the dock. My study of SP prototype loading docks shows them to have a slope of anywhere from 1:4 to 1:6. I chose something in between here. The cut pieces of sheet look like this:

The two large pieces are the dock’s top and incline. The two long strips, and one short one, are the three sides of the top. The two triangular pieces are sides of the incline, and are arranged as they were cut: first a rectangle, then a diagonal cut to make the two triangles.
Using HO scale 6 x 10-inch styrene strip in the corners, I began assembly by attaching the two sides to the end piece. I make sure this kind of connection is square by letting the parts set up within this machinist’s square: 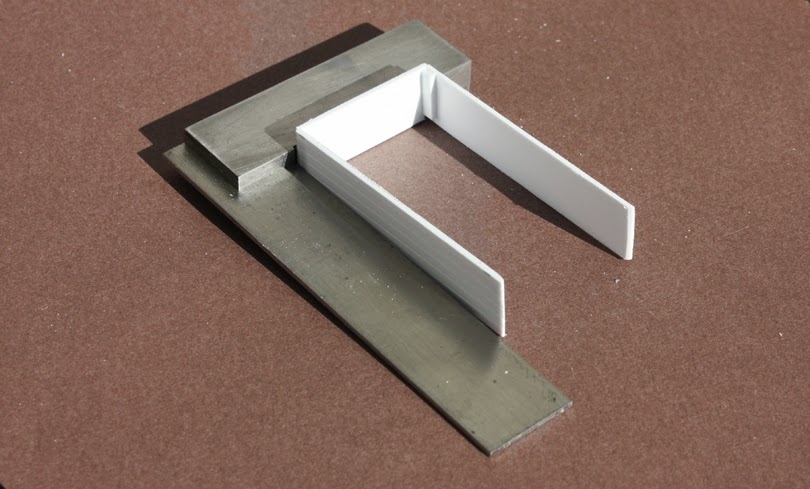 With this looking all right, I used the same 6 x 10 strips in the corners, to attach the assembled sides to the top of the dock. 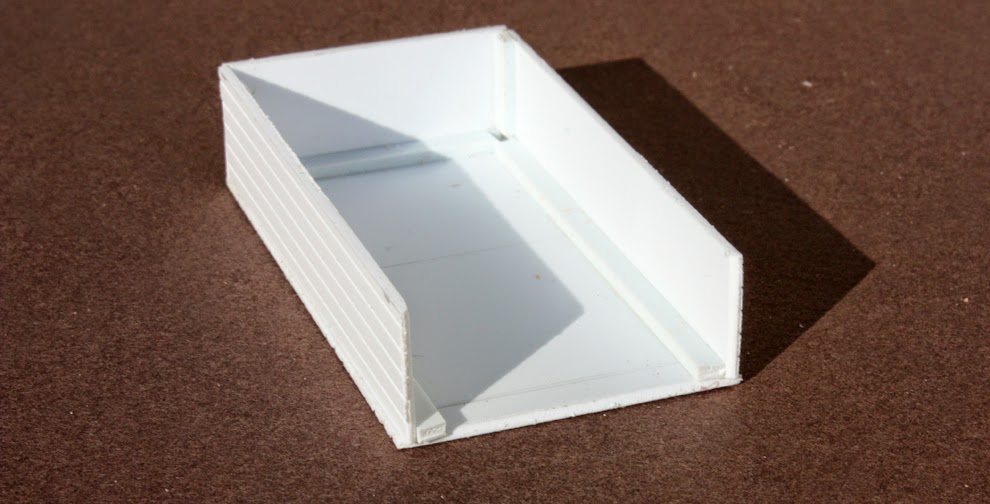 It isn’t obvious here, but I have also notched the front edge of the top sheet, so the plank divisions are visible on the side of the deck top. I also scrubbed the top with coarse garnet paper and dug a few divots with a hobby knife, to befit a dock with some usage. The same was done to the incline.
Next, the incline and its sides are assembled the same way as the rest of the dock, and the two sections are joined. I used a piece of 0.020-inch styrene sheet, pre-bent to the angle between the two sections, to splice the connection underneath. With a couple of trim boards added, here is the complete dock.

I painted the dock with Star Brand paint, their color STR-11, “Seasoned Brown Wood,” and weathered it with tube acrylics; see the Reference Pages at upper right of this blog site. Here you see it in front of the state highway garage. 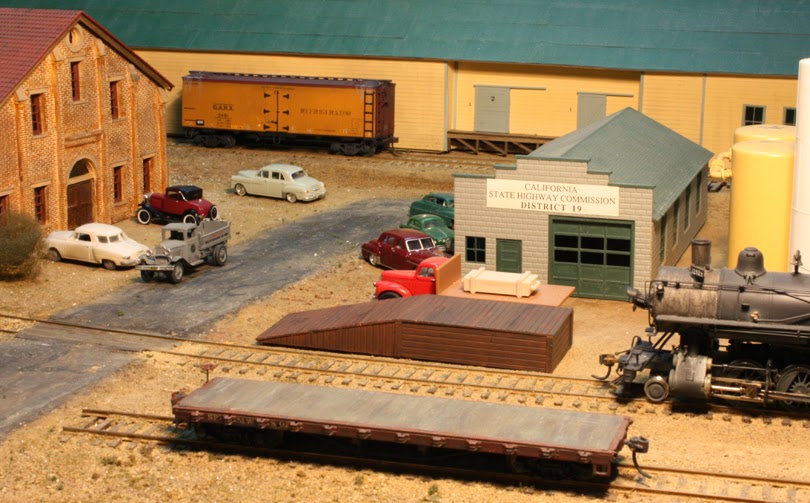 My second dock is for the depot at Ballard, so it must fit around the end of the house track, against the depot building, and allow space alongside it for truck traffic to the team track spot. It is L-shaped. I measured all these dimensions carefully on the layout, laid them out on the same kind of V-grooved styrene sheet as for the dock shown above, and then began to assemble it. The same kind of styrene box was built. To make all planks run across the short direction of the platform, I had to splice the top deck in a couple of places, then abraded and distressed the deck as described above.
Once all parts were in final size and shape, I airbrushed the sides with SP’s depot color, Colonial Yellow (using Tru-Color paint no. 153), and the top with the same Star Brand wood color mentioned above, and the same weathering. Trim boards are SP’s Light Brown, painted with Tru-Color no. 163. Here it is shown in place against the end of the Ballard depot, with some freight items on it. 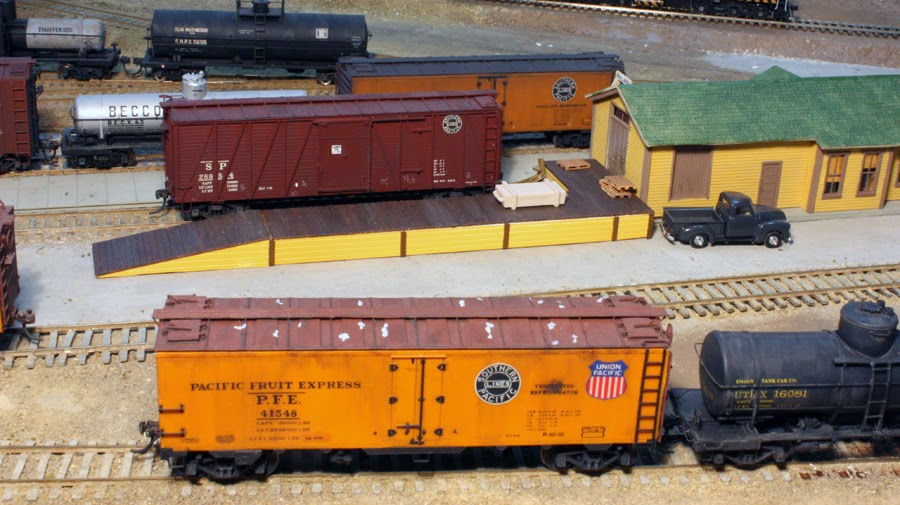 The depot at right has now been painted Colonial Yellow, as was the plan, described in a prior post about the Ballard depot (which you can see at: http://modelingthesp.blogspot.com/2014/07/my-ballard-depot.html ). The sides of the new dock need a little weathering. And by the way, those are Preiser pallets on the dock.
As I said at the outset of this post, many structures, even some kits, need to have loading docks added for rail service. This “styrene box” method is an easy way to make them.
Tony Thompson
Posted by Tony Thompson at 10:10 AM