Getting Down to Basics

Some years ago, in 1991 to be exact, Richard Hendrickson and I set out to write one of those modeling articles, which becomes increasingly improbable as you read through it, and culminates in a reference to today’s date. I’ve reproduced the result (with permission from Bill Schaumburg), a “Perspective” column from Railroad Model Craftsman in the April 1991 issue, on Google Drive, for those who might never have seen it, or would like to see it again.

I would just correct one detail in the RMC version: the photograph was credited to me, but in fact was supplied by the Association of American Railroads. Here is the photo for reference. 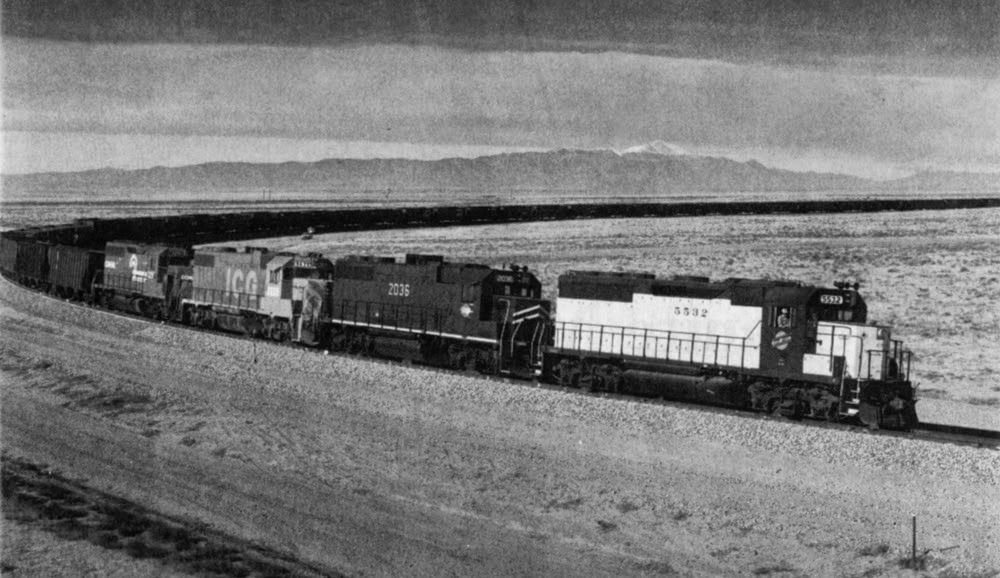 Notice that all four locomotives are now “fallen flags.”
So what’s it about? Here’s a kind of reprise of the article. Our premise could be regarded as the idea that you may not have enough space to build the model empire of your dreams (Pennsy’s Horseshoe Curve, St. Louis Union Station complete with train shed, SP’s Donner Pass), but you can always simplify down to the elements, even if all you have is part of a small room. In fact, you might be able to simplify all the way to one of those layouts that is only erected at one particular time of year, with a small, decorated conifer in the middle.
What were we talking about? The Federal Railroad Administration test track in Pueblo, Colorado, built in 1971 for testing of high-speed rail concepts, and still very much in use, though with more track than when we described it in 1991. You can see the current track plan at: http://www.aar.com/tracks.php .
The test track has the special attraction for modelers seeking simplicity that it is, indeed, just a loop of track (or a couple of loops today). Trains run around it at fixed speed, around and around, to generate miles of use on whatever is being tested, whether track, locomotives, cars, trucks, track-train dynamics, or whatever, and often several of these at the same time. Equipment borrowed from many railroads leaves you free to choose the road names you like, and DCC definitely is not a requirement.
We also pointed out that scenery can be minimal (see photo). There is little vegetation at the site, few structures near the track, and in the eastward direction toward the Great Plains, there is only a flat horizon line, simplifying any backdrop needs.
When we were writing this little piece, Richard and I were endlessly amused with ourselves, and thought the article was screamingly funny. But after it was published, editor Bill Schaumburg told us that not only did few readers find it amusing, but some actually complained, and in hindsight, there is a certain snarky tone to be detected. Obviously neither of us was cut out for comedy writing. But it was fun while we were thinking it up.
Tony Thompson
Posted by Tony Thompson at 10:55 AM