I am preparing to host an operating session at the spring meeting of the Pacific Coast Region (NMRA) next month. Since not only have some of my siding arrangements changed, but I have somewhat modified my waybills, modified the communications between agent and crew, and even created a more complete timetable with town maps, as described in my article in Model Railroad Hobbyist, the “Getting Real” column for October 2014 (you can download this or any issue of MRH for free, at: http://model-railroad-hobbyist.com/magazine ), I decided I ought to put everything into service, and do a trial operation of the layout with all these changes together.
My friend Ray DeBlieck was available for a couple of hours at a time when I could host the session, so I invited him to come over and give it a try. I was not even sure how many things I would need to explain in advance, since Ray is a very experienced operator and has visited the layout before. So I kept my briefing to a minimum and observed carefully to see what issues might arise, such as directions that weren’t clear. That was one of the objectives of the session, after all.
In this photo at Shumala, you can see the various freight cars on hand, most of which would have to be switched, and in front of the yard office in the middle distance, the switcher is idling, ready for work. (It’s a Broadway Limited NW-2.) 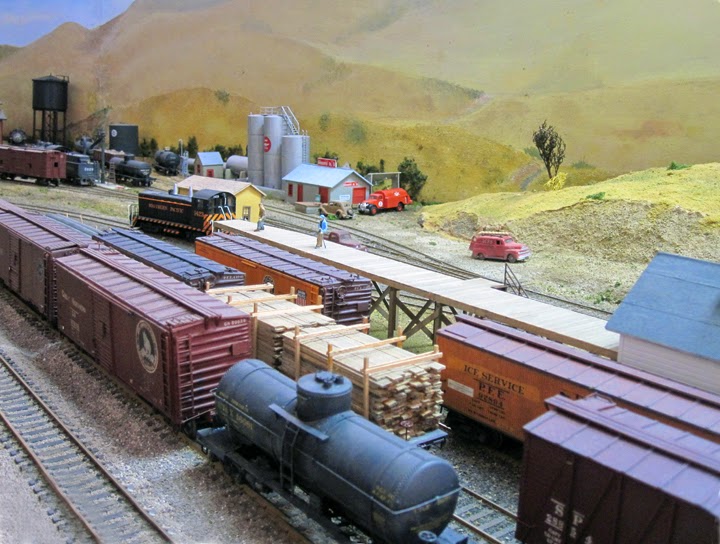 The first materials I handed Ray were the new timetable and all the waybills for the cars he would switch. I also handed him something new (for me): a message from the Shumala agent. I discussed internal SP communications of this general type in a prior blog post (you can read it at the following link: http://modelingthesp.blogspot.com/2012/08/internal-sp-communications.html ). As I said in that post, blank telegram forms were often used on the SP for all kinds of messages other than telegrams.
What sort of message might this be? I showed several examples of agent messages in my post about bill boxes, to show what a crew might find in a box (it’s at: http://modelingthesp.blogspot.com/2012/03/bill-box.html ). Here is another example, provided by Chet French; it’s directed to the “Dixon Way Freight” and describes work at Dixon, Illinois. It tells the crew which cars to pull or re-spot, and is pretty specific. In fact, this is only part of the entire message page, but it clearly shows the kind of thing that might be provided. 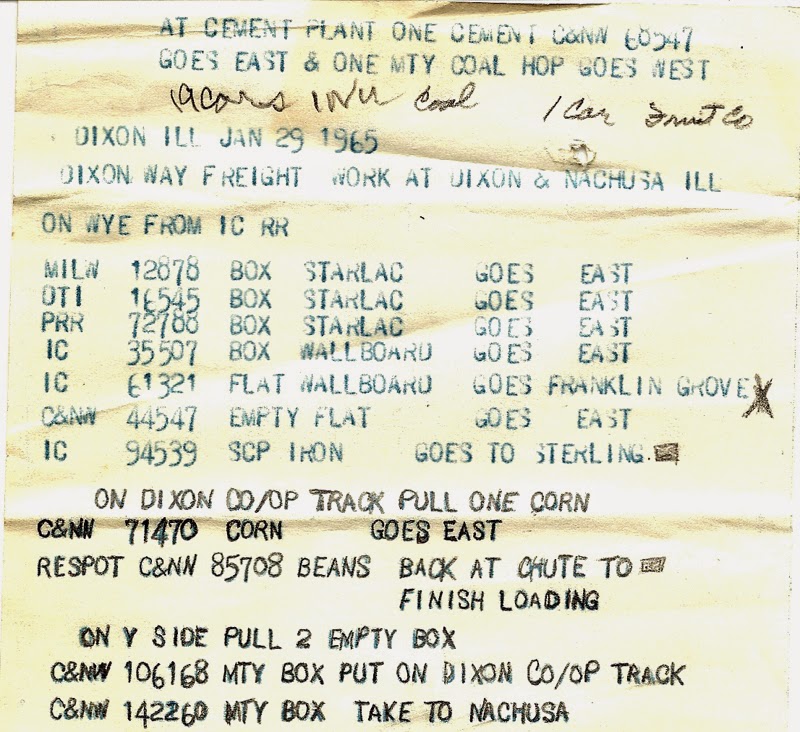 I used the SP telegram blank, from the post cited two paragraphs above, and gave Ray the following agent’s message at Shumala. Among other things, it directs car icing, information not available on waybills since empty cars being pre-iced do not yet have a waybill.(Hopkins is a prototype name; he once worked at nearby Oceano.) 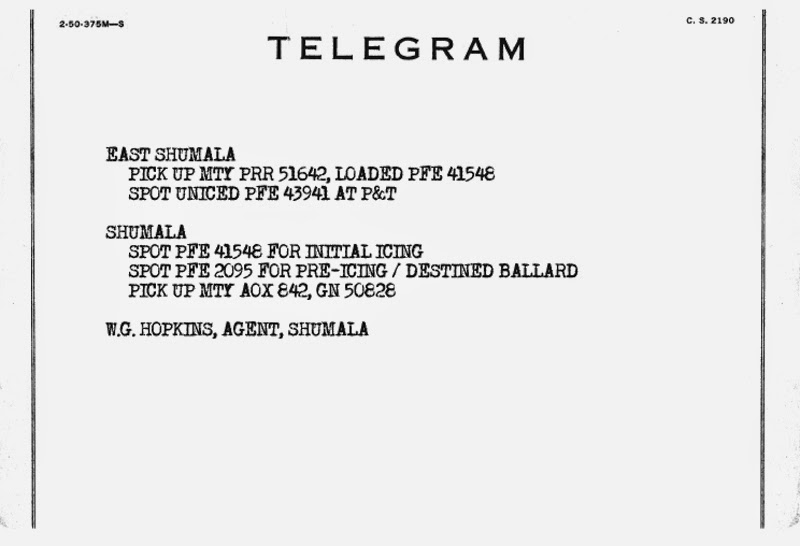 Once Ray absorbed what was in the paperwork, he got to work, and having plenty of experience switching, quickly got things sorted out with only a couple of false moves. Here he is sorting cars by destination. 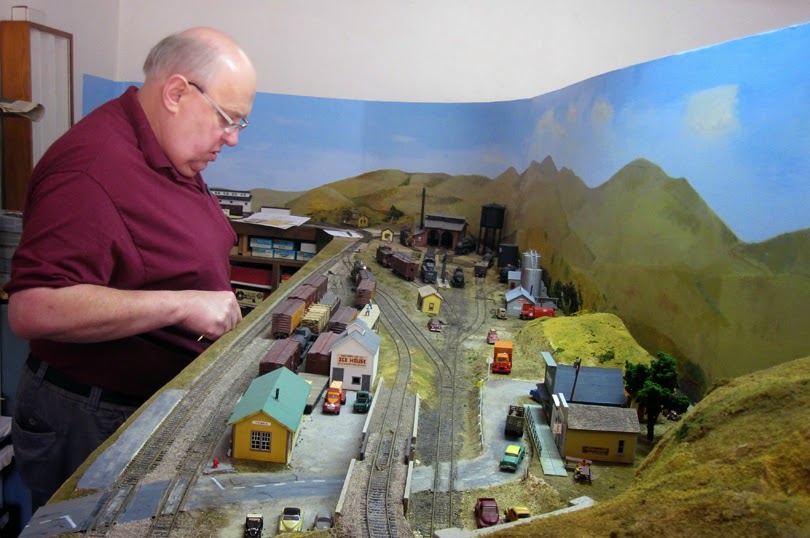 Once he completed work at Shumala, the train to Ballard could be made up. Here it is departing Shumala, using the NW-2 to shove up the hill. The caboose is behind the engine. 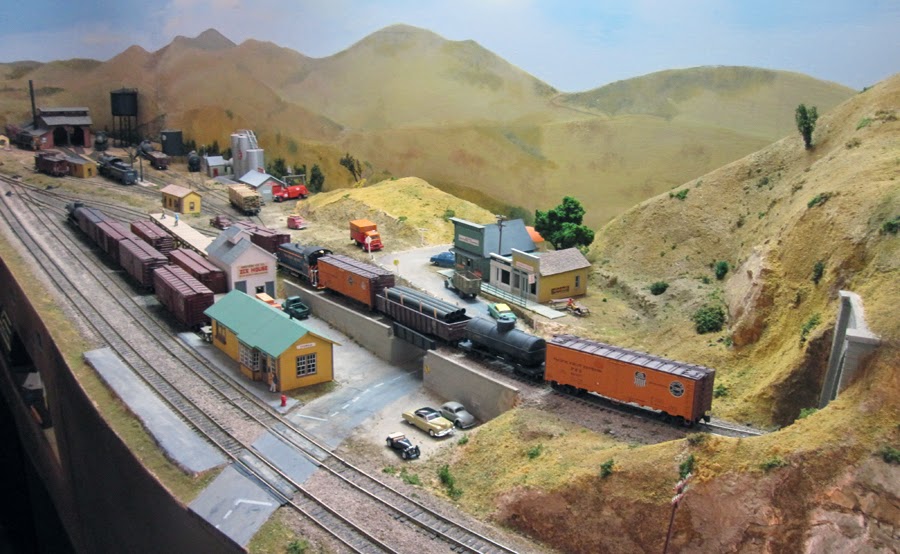 Once in Ballard, he stopped alongside the depot to collect another message, this one from the Ballard agent, and his local waybills. In the photo below, he is well along with switching Ballard, and is about to spot that foreground gondola of pipe on the team track. 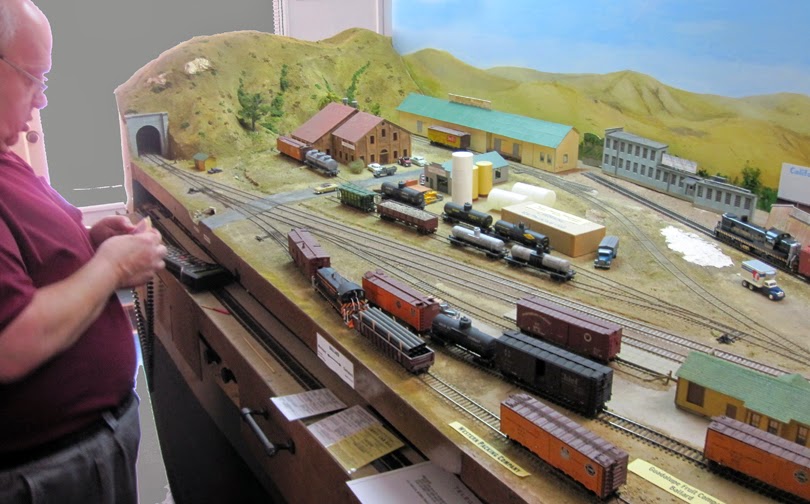 This session went pretty well, and though I did have some issues with electrical contact in a few turnouts, the switching plan generally worked all right. I do need to make refinements in my agents’ messages, and will also make a small modification in the layout description. But this practice session with new arrangements served its purpose, showing me what worked all right and what needed more development.
Tony Thompson
Posted by Tony Thompson at 12:51 PM