A drawer to store open-car loads

One problem with removable loads for open-top cars is convenient storage. I have written several blog posts about open-car loads (for example, see: http://modelingthesp.blogspot.com/2012/03/open-car-loads-lumber-in-gondolas.html , or for the pipe loads I especially like to build and operate, see: http://modelingthesp.blogspot.com/2012/01/open-car-loads-pipe-in-gondolas.html , or the always-popular, and deservedly so, because of their versatility, crates: http://modelingthesp.blogspot.com/2012/03/open-car-loads-crates-and-machinery.html ), and each of these load types needs to be stored.
A solution I devised on my layout when it was in Pittsburgh, PA was a homemade drawer, set into the fascia, so that loads were available right at the layout. When I moved, all that fascia material was dismantled, but the drawer was saved. I thought it might be interesting to show how I have re-installed it in my present layout.
My basic design is elementary, simply using lengths of L-girder as sides, with a pair of pieces of molding on each side for sliding support. The basic arrangement is shown in this crude sketch, to identify major features.

First, here is the drawer I had built earlier. It is really just a box made from wood scraps, with an open top, and Masonite on the front to match the fascia. My wife scrounged in her fabric odds and ends and came up with the piece of yellow felt that’s in the bottom. The key mechanical detail is the piece of molding you see glued along the edge of the box. This molding is the drawer half of the support arrangement (see sketch above), and slides on another piece of molding on the fixed support. 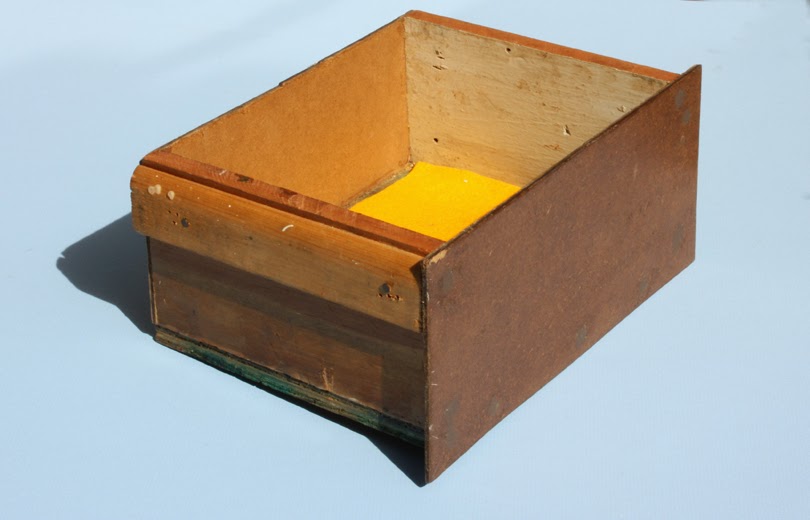 For this installation, I had to make new side supports, and repeated my use of pieces of L-girder, a fair amount of which I salvaged  from the Pittsburgh layout. I just cut some slices longer than the drawer. Then careful measurement determined how far below the top of the drawer opening I should locate the side molding, which in turn was the depth at which I had to attach the support molding to the L-girder. Here you see a support being glued to one of the L-girder pieces.

The L-girder sections were then attached to the bottom of my staging drawer, with screws through the short leg of the “L,” as is done in layout construction also. It was naturally essential to install these pieces perpendicular to the front of the layout, and correctly spaced to support the drawer, and also allow it to move freely. This design, however, is not dimensionally critical, because there can be some slop in the width of the support spacing. Here are the supports, installed below the table surface. 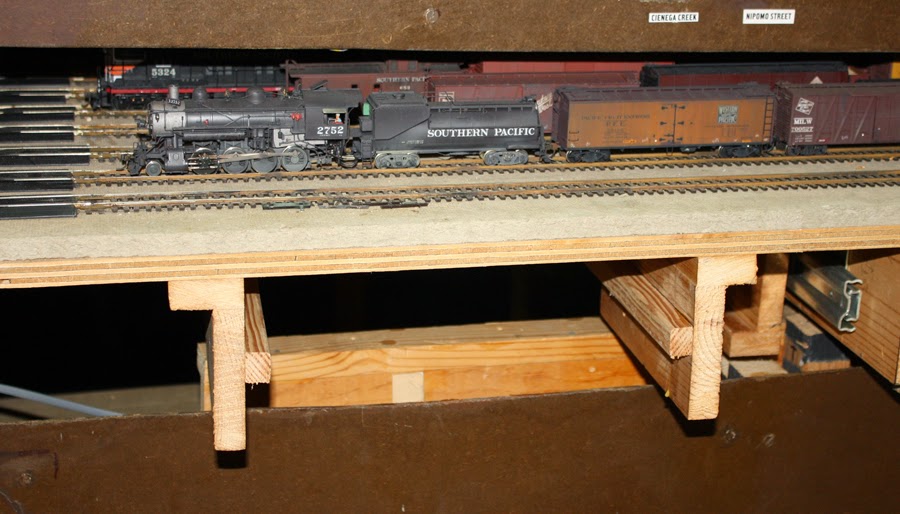 Above the drawer supports you can see the tracks of my staging table. I described the idea for this table, and its construction, in an earlier post (at: http://modelingthesp.blogspot.com/2010/12/staging-trackage-installation.html ).
At this point, I could design the fascia for the staging table. I followed my usual practice here, which was to tape up a couple of sheets of newsprint and cut out a paper pattern, which would then be used to locate cuts on the Masonite fascia piece. Here is the paper pattern, as cut, taped in place where the fascia will go. 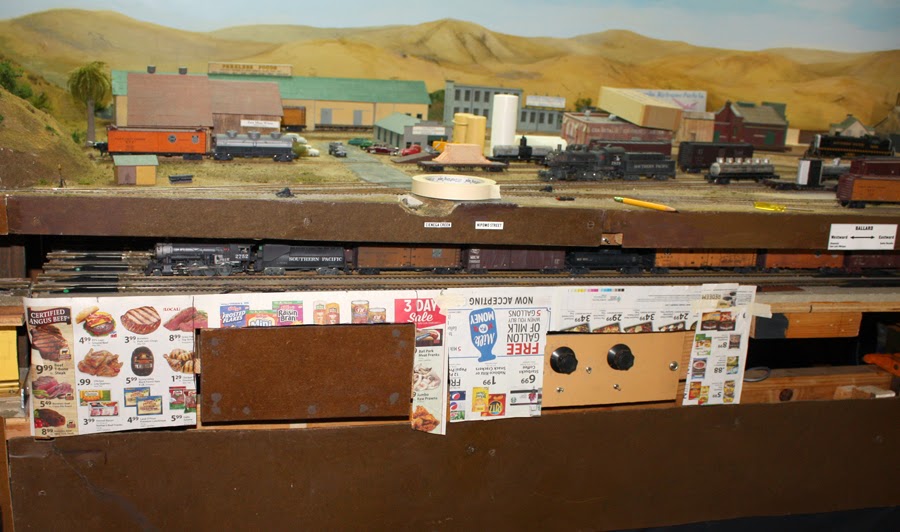 In this photo, the drawer is in place in the left cutout, while the cutout to the right encloses the electrical controls for the staging tracks. Next, of course, the pattern was transferred to a Masonite strip.
The installed fascia is shown below, with the staging table pulled out a ways. At the top of the drawer opening, you can see a short piece of wood installed as a drawer stop (don’t want the drawer slipping out and dumping loads onto the floor!). A number of loads are in the drawer. 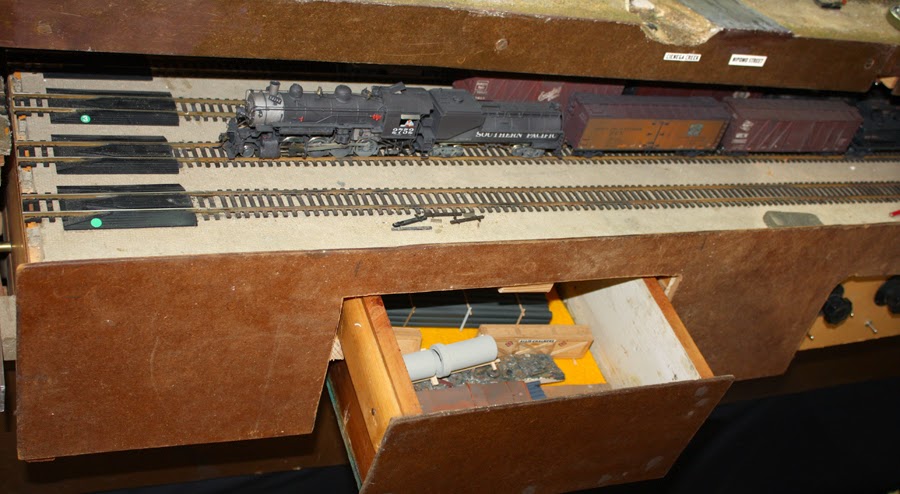 I am also in the process of putting together a “utility shelf” for crews to use for whatever should not be on the layout (tools, track cleaning blocks, uncoupling picks, etc.). It will be located off to the right of the area you have seen in this post. The utility shelf will be covered in a separate post.
Tony Thompson
Posted by Tony Thompson at 10:04 AM

Email ThisBlogThis!Share to TwitterShare to FacebookShare to Pinterest
Labels: Freight cars, My layout