I have posted several times about the prototype movement of empty freight cars using a simplified paperwork item called an Empty Car Bill, Slip Bill, Card Bill, or Empty Bill on various roads (and likely many more names as well). I list below some of these prior posts, with links provided, and the railroad or roads whose bills were shown.

I have been receiving more examples of these kinds of bills, provided by a variety of generous modelers around the country, and wanted to show the additional items. These continue to demonstrate that there were no two alike, though there are recognizable types, and of course this was in no way a “standard form” as was, for example, the AAR waybill.
I will begin with the Reading, which used at least two kinds of Empty Car Bills. One type was red and used for empties of assigned service, specially equipped cars and cars like heavy-duty flat cars, or for any other reason not to be confiscated. The other was a manila type of color, as was used for empty cars which could be confiscated if needed. (You can click to enlarge any of these images.) 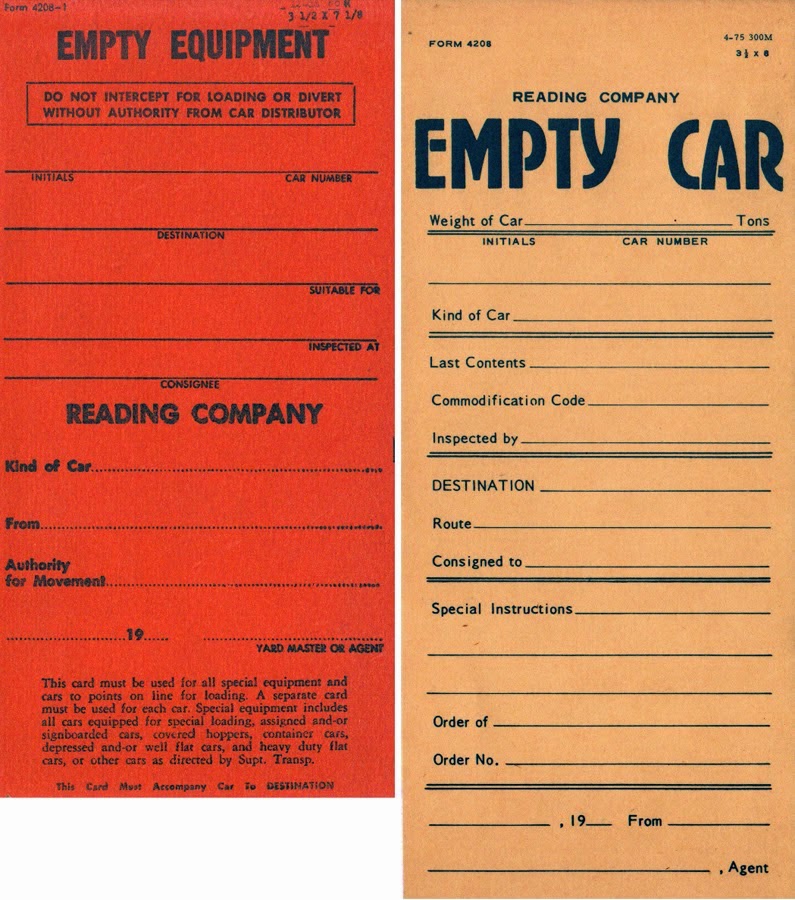 Another version, fairly simple in design, is this Card Waybill from the Illinois Terminal.

The C&O also had a good form, and this example is interesting because a rubber stamp was used for the location from which the car was sent, avoiding writing the same words over and over. Note that, like several other prototype forms of this kind, the form provides separate sections to accommodate cars that are either empties to be moved somewhere else, or empties routed homeward.

Finally, the Nickel Plate had a form like this too, though as I understand it, there are reports it was not used everywhere on the railroad. This form too has been rubber stamped with an origin location.

The two examples above which are filled out are handwritten, though I have also seen examples obviously done on a billing typewriter (capital letters only), which most agents had.
In particular, these interesting examples show the diversity of Empty Car Bills, which certainly frees up anyone wishing to freelance such a form, and for those wishing to reproduce their prototype’s form, it will be worth seeking out an example of what may well be a distinctive piece of paperwork.
Tony Thompson
Posted by Tony Thompson at 10:11 AM